The North Queensland Cowboys have ended their five-game losing streak with a convincing 26-14 defeat of the Gold Coast Titans on Saturday night in Townsville.

Several big-names for the Cowboys finally clicked, with Johnathan Thurston, Jason Taumalolo, Lachlan Coote and Jake Granville all delivering excellent performances, as well as their stalwarts of the past five weeks - Scott Bolton, Kyle Feldt and Ben Hampton.

It wasn't all positive for the Cowboys, as John Asiata and Coote both left the field early due to injury.

The Cowboys almost took the first try of the night off the back of a Titans penalty, but Gavin Cooper was ruled to have obstructed Kevin Proctor before Justin O'Neill went through the line.

Eventually the Titans took first points when errors from both sides found the Titans in possession close to the home side's line. A penalty against the defenders gave the Titans an easy shot at goal to kick off their night.

A perfect hit from the man who gave the penalty, Jake Granville, put the Titans under pressure and they took too long in the ruck, leaving the Cowboys behind on the scoreboard for less than a minute after they equalised with a successful shot at goal.

The Titans couldn't get their discipline in check, and despite more errors from both sides, the Cowboys were given two more shots at goal for high tackle and off-side penalties.

As half-time drew near the Cowboys were given an opportunity to attack when the Titans kicked out on the full from the kick-off. They didn't waste it, with a wrap-around play finding Asiata, who put Ben Hampton into a perfect hole.

They were given one more shot at the line with 40 seconds to go when Michael Gordon dropped Michael Morgan's kick.

A late switch to the short side from Thurston and a return pass to the halfback from Granville opened up space for Kyle Feldt, who went over untouched to boost the half-time score to 16-2.

While the Cowboys were well in control going into half-time, the break did them no favours, but they did manage to regain the momentum briefly when Hampton almost went the length of the field.

They didn't score and the Titans nearly got one back when Scott Bolton was driven into the in-goal after coming up with the ball from a high kick. The Cowboys nullified the attack, but after an error in their own danger zone, had to do it again before they got out of their own half.

A penalty for back-chatting against the Titans carried the home side up the field, where Thurston found Taumalolo in a gap. Taumalolo stepped around fullback Michael Gordon to score under the posts.

The Titans simply couldn't turn possession into points. Despite a strong of penalties carrying them up the field, the Cowboys kept turning up in droves in defence.

Their commitment was rewarded after Feldt defused a cross-field kick and they went the length of the field on a seven-tackle set. Morgan soon put Coen Hess into staggered defence and the powerful back-rower did the rest himself.

Once they knuckled down defensively, the Titans found some attacking rhythm, with Ash Taylor streaking through a broken defensive line virtually untouched to score the first of the night for the visitors.

Prop Jarrod Wallace went over minutes later, but that was as close as the visitors got. 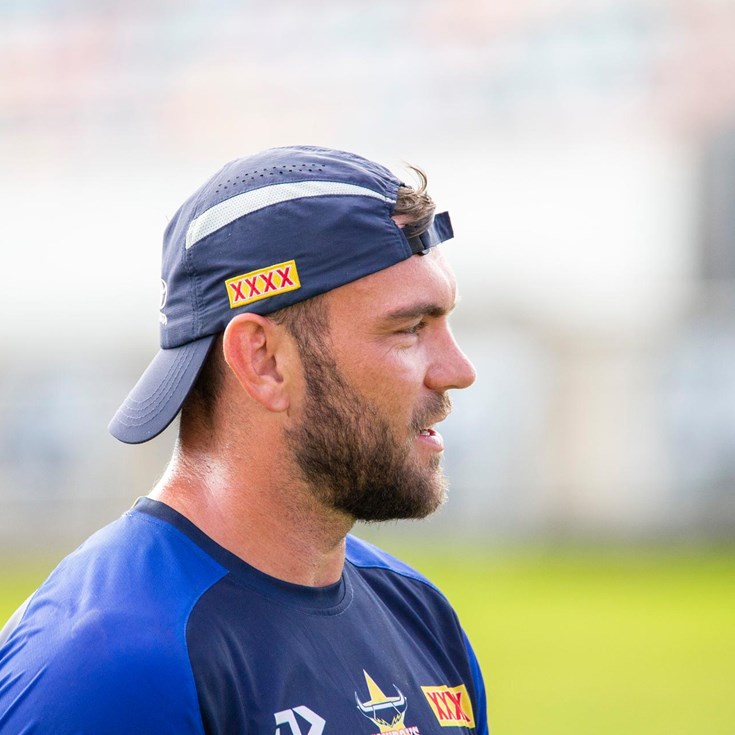 Cowboys focus on back three

Bouncing back: Wallace ready to lead the charge again