Mitchell Pearce's pectoral muscle injury is set to complete a changing of the guard for the NSW Origin team, with new Blues coach Brad Fitter to select a team with no players from the pre-Laurie Daley era.

With Pearce appearing refreshed following his move to Newcastle and leading voting for the Dally Ms after the opening seven rounds of the Telstra Premiership, Fittler would have been tempted to select him for an eighth Holden State of Origin series.

Penrith's Nathan Cleary is considered the next long-term NSW No.7 but he has been sidelined with a knee injury since round three and isn't expected to be ready for the series opener at the MCG on June 3.

The injury to Pearce ensures Fittler does not return to the past by selecting a player who has been the Blues No.1 halfback option on NRL form since his Origin debut in 2008 but has never played in a winning series.

While it would have been one of Origin's greatest redemption stories if Pearce could have finally led NSW to the series win which eluded him when he was overlooked for Trent Hodkinson in 2014, the Blues need to move on and finish the rebuilding of the team that Daley started.

The other stalwarts of that dark period in NSW history between 2006 and 2013 have all gone, with Paul Gallen and the Morris twins, Brett and Josh, retiring from representative football, while Robbie Farah, Beau Scott, Luke Lewis, Trent Merrin, James Tamou, Michael Jennings and Tony Williams have previously lost their places.

Jarryd Hayne is not expected to come under consideration by Fittler after being recalled in the centres last season, while Andrew Fifita has reaffirmed his allegiances to Tonga after playing for the Mate Ma'a at the World Cup.

After being appointed to replace Daley, Fittler is expected to select a new-look Blues team and it will be one in form, with NSW players dominating most of the key NRL statistics this season when compared to their Queensland counterparts.

Roosters five-eighth Luke Keary (1.33) leads the NRL for the most try assists per match, while team-mate Blake Ferguson (196.1m) averages the most run metres per match on the wing ahead of Canterbury prop David Klemmer (169.87m) and James Tedesco (164.49m).

Woods (16) is also fourth for offloads, with no Queenslander listed in the top 10. Manly fullback Tom Trbojevic leads the way for line-breaks and with St George Illawarra fullback Matt Dufty is averaging one per game.

With Pearce ruled out and Cleary injured, Brooks has emerged as a genuine Origin contender but Keary is favourite to win selection in the halves alongside James Maloney, who has confirmed his ability to lead a team around in the absence of Cleary at Penrith.

Maloney (34) is third for line-engaged runs, behind Kieran Foran (44) and Johnathan Thurston (39) and has the most kicking metres (1820.6m) of the NSW halves options, although Pearce was No.1 in the NRL with 2646 kick metres in seven games.

Besides leading the NRL for try assists per game and being one behind Gareth Widdop (nine) for the most, Keary is ranked equal second for line-break assists, with he and Trbojevic averaging one each per game, and is seventh for supporting runs (26.17 per game).

Warriors five-eighth Blake Green is another option, while Fittler is known to be a fan of Mitchell Moses after coaching him in the Lebanon team at last year's World Cup and if the Parramatta playmaker can maintain his form from Sunday's defeat of Manly he will come under strong consideration.

Barring injury, Tedesco is expected to retain the No.1 jersey, with Trbojevic moving to the wing. Ferguson's form is likely to be too compelling for Fittler to overlook him for the other wing berth but centre spots are wide open. Josh Dugan, Mitchell, Aitken and Roberts are the main contenders.

Backrowers Boyd Cordner, Tyson Frizell and Jake Trbojevic were in Australia's World Cup winning squad, along with in-form Penrith prop Reagan Campbell-Gillard, who is vying with Klemmer, Woods and Vaughan for frontrow spots.

The hooking job is believed to be a three-way contest between Cook, St George Illawarra's Cameron McInnes and incumbent, Gold Coast's Nathan Peats, while Brisbane's Jack Bird, Penrith's Tyrone Peachey and Parramatta's Clint Gutherson are likely to be the main contenders for the bench utility role. 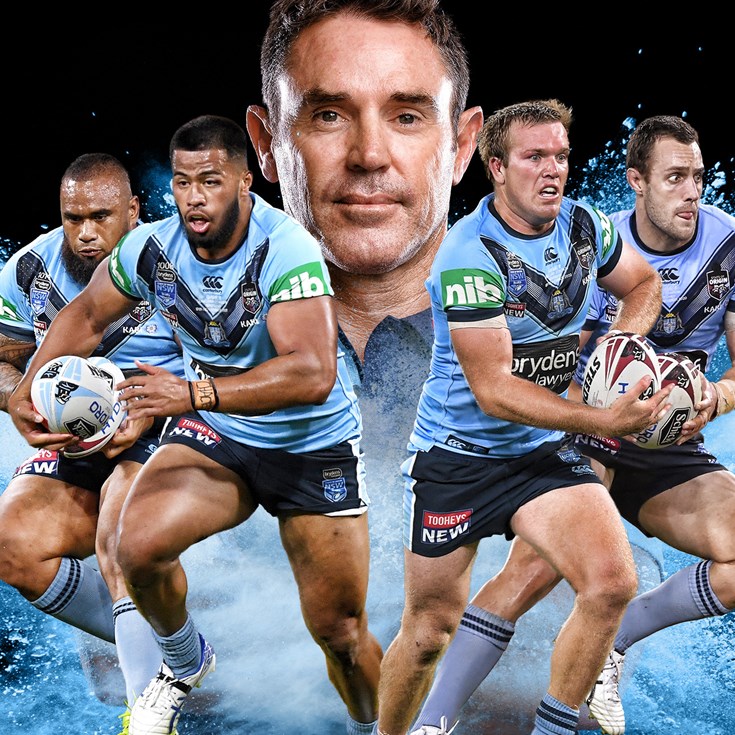