After six long weeks of gloom and doom, the sun is shining again out Parramatta way.

Spearheaded by halfback Mitch Moses's five-star performance, the Eels finally clicked on Sunday, chalking up their first win of the season with a confidence-restoring demolition job on the Sea Eagles.

This was the Parra of last year, the one that charged into the top four and had most pundits tipping big things for 2018.

One win doesn't make a season but it was a huge step in the right direction and should have the Eels in a positive frame of mind for their home clash with the Tigers, who squandered a match-winning lead in last week's loss to the Knights in Tamworth.

Wests romped to a 30-20 victory over the Eels in round four but might not have it so easy this time around.

Key match-up: They were teammates for a few years but Moses and his Tigers counterpart Luke Brooks are rivals these days. Maybe not off the field, but they will be stinging to get the better of each other on Sunday. Brooks is in career-best form, while Moses got back to his sparkling best in last week's thrashing of Manly. If it's close in crunch time, Brooks and Moses will both be looking for a match-winning play.

For the Eels to win: If Parra get over the Tigers forwards like they did against Manly, it will allow Moses and Corey Norman to create plenty of scoring opportunities. And if the Eels need an X-factor for something special, there's always fan favourite Clint Gutherson to energise the home crowd.

For the Tigers to win: After blowing a match-winning lead last week, the Tigers learned the hard way that no team can be taken lightly and no margin is safe. Wests built their early wins on defence and the Knights exposed a few chinks in the armour that Ivan Cleary has more than likely addressed this week. This game will tell us a lot more about the Tigers' top eight prospects.

Eels stat attack: Parra lost to the Tigers earlier this year but haven't lost to them twice in the same season in six years. The Eels need to improve their goalkicking, ranking last with a 65 per cent success rate.

Tigers stat attack: Brooks and Benji Marshall love putting boot to ball, with the Tigers far and away the NRL leaders in total kicks (150) and kick metres (3895). Wests boast the best defensive record in the competition, conceding 12.7 points per game.

The Eels will start 1-17 after Tepai Moeroa and Josh Hoffman were the last two players to drop off the bench. Bevan French returns from a shoulder injury to replace Jarryd Hayne (hip, 4 weeks) on the wing in the only change to last week's winning team. Lock Nathan Brown remains unavailable with an ankle injury. Kane Evans and Cameron King were cut from the initial 21-man squad on Saturday afternoon.

In the changes made to the squad an hour before kick-off: Mahe Fonua (No.21) will start the match in place of winger Malakai Watene-Zelezniak (out of the squad), Pita Godinet will start at hooker with Jacob Liddle moving back to the bench, Sauaso Sue comes off the bench to start at prop and Matt Eisinhuth will start at lock in the No.8 jersey. Watene-Zelezniak and Tyson Gamble were the two players to drop out of the squad an hour before kick-off. Chris Lawrence returns from a hamstring injury, but lock Elijah Taylor is out, with Josh Aloiai to start. Tim Grant has been promoted to the interchange bench, with Chris McQueen cut from the reserves 24 hours before kick-off.

Steve Turner's prediction: Parramatta showed everyone what they are capable of last weekend when they claimed their first victory of the season, while the surprise packets of 2018 the Wests Tigers were off the pace in their defeat to the Knights. The return of Clint Gutherson has been what the blue and gold needed and his energy is what the team thrives on. The Tigers are capable of turning last weekend's result around and they have shown signs they are a good football team this year, but I feel the Eels' performance against the Sea Eagles will kick-start their season and they will be too hot for the fourth-placed Tigers. Eels by 10. 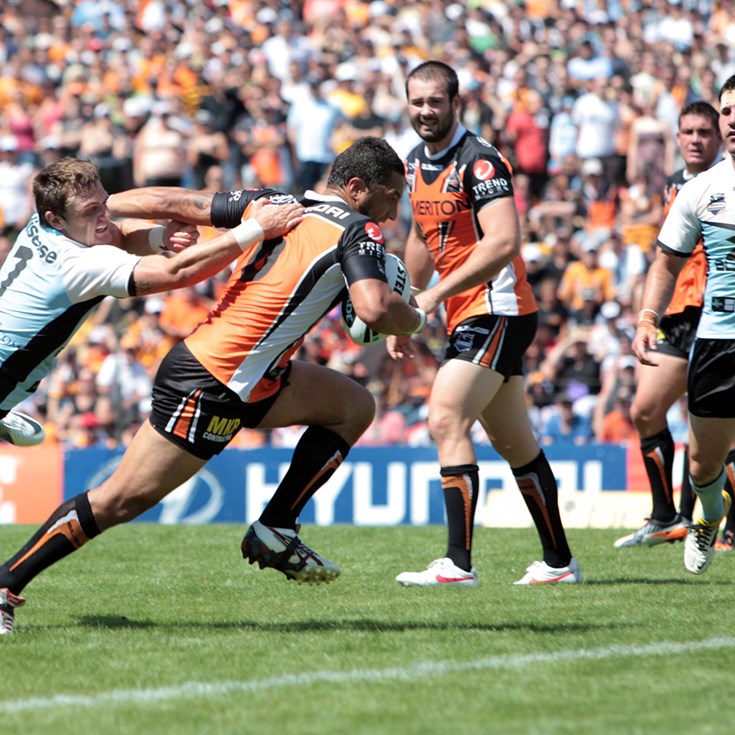 Why Maguire believes in life after Benji and Harry