Dylan Edwards can't explain it but Penrith management joke something is definitely in the water at the foot of the mountains with the emerging star the latest Panther to become a father.

Edwards' life has changed forever off the paddock, when he was preparing to play Canterbury in round three with the possibility partner Nadine could go into labour at any minute.

The Panthers will take on the Bulldogs for a second time this season on Friday night and Edwards is expecting a much smoother build-up this time around.

"It has gone quick, it probably didn't bother me as much as it might seem though," Edwards told NRL.com.

"It was more the week after I got worried because we had to go to Townsville and I knew then Nadine was touch and go. So it probably played on my mind across a longer period but I was hopeful it worked out for everyone."

As it turned out, the rugby league gods blessed the pair - and the club - with baby Bronte arriving a day after the Panthers' two-point loss to the Bulldogs on March 24.

It good to get the win last night! And it was special day having Bronte at her first game 🐾 #pantherpride

At 22, Edwards admitted parenthood was not on the radar at his young age with a heavy focus on football, but declared he wouldn't change the life experience for the world.

And up until Sunday's loss against Cronulla, Edwards was yet to experience a loss with Bronte in his life.

"Losing isn't good but being able to go home and cuddle her offers a new perspective and something I never had at the start of the year," Edwards said.

"(Football) is not the be all and end all. I probably didn't dwell on the result too much when I got home as much as I would have.

"There are so many boys at the club becoming young dads so they feel the same too. It's pretty crazy how many are, but it gives the kids a chance to grow up together and leaves everyone level headed.

The Panthers remain in the top-four on the Telstra Premiership ladder after seven rounds despite the Sharks loss.

Edwards is confident the side can bounce back in round eight against a struggling Bulldogs outfit.

"They were just technical things, nothing too major," Edwards said of the 26-22 loss last round.

"The pleasing thing is our effort has always been there. We scored late tries because of that, which later on in the year could mean something, so that's positive that we're not just giving up because the game is out of reach.

"You should be able to win games when you score 22 points. You shouldn't be losing games there but we're not far off when we are losing." 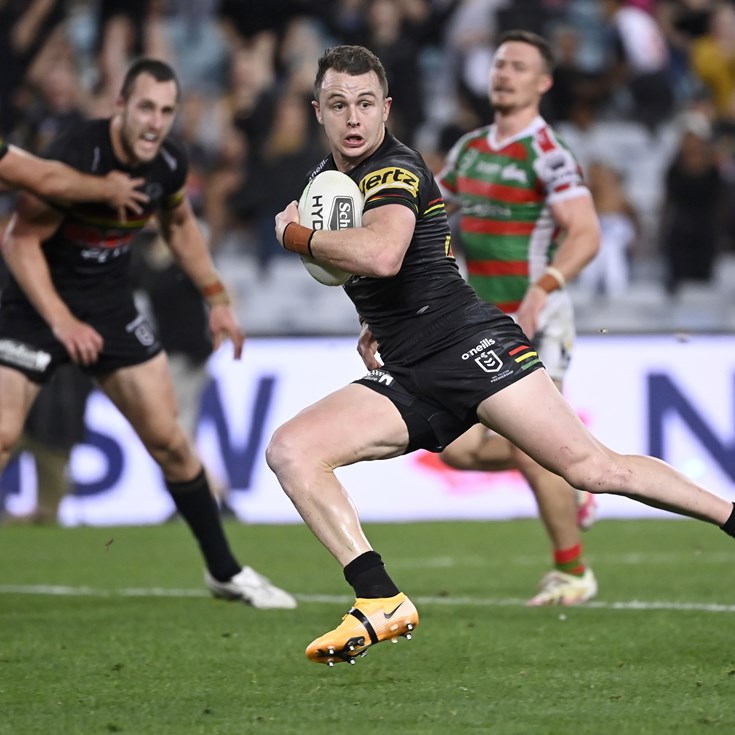 'Could take Nath's spot': Gun No.1 paying back Cleary's compliment

What the week off will do for the Panthers

Assessing the loss of Kikau on the Panthers' attack

Panthers have Billy's back as judiciary hearing looms