The Eels have claimed revenge for an Easter Monday loss to the Wests Tigers, edging their way to a thrilling 24-22 win at ANZ Stadium on Sunday afternoon.

The pulsating encounter saw five lead changes, with no side able to assert dominance over the other at any stage.

The bad news to emerge from the day for the Eels was the suspected ACL injury suffered by back-rower Tony Williams late in the first half. If scans confirm the worst fears, Williams's season is likely to be over.

The Eels looked nothing like the rabble that put up little fight the last time these two met four weeks ago. They hit with plenty of energy in defence and scored some impressive tries as both halves rode the wave of confidence generated in last week's big win over Manly.

Back-rower Manu Ma'u and hooker Kaysa Pritchard were in everything as each bettered their impressive personal performances from last week while winger Bevan French reversed his injury-ruined showing against the Raiders a fortnight ago.

For the Tigers, the loss off the back of last week's last-gasp loss to the Knights was punctuated by some occasional impatience with the ball and late-set penalties in defence that proved costly.

While it was their second-straight loss – for the first time this year – it is hardly panic stations for Ivan Cleary's men with all three losses this year coming by just two points.

Winger Mahe Fonua was strong in his first NRL game for the club and centre Esan Marsters and fullback Corey Thompson go from strength to strength. Luke Brooks was again strong although some fifth-tackle options late in the game could have gone better.

A testing feeling-out period early on saw both teams trade penalty goals with the 2-2 scoreline a quarter of the way into the contest proof that both teams showed plenty of energy indefence.

Impressive Tigers centre Esan Marsters conjured a try out of nowhere when he fended off Kaysa Pritchard to split the Eels line and create a two-on-one with the fullback to send Corey Thompson over under the posts.

The Eels had arguably looked the better of the two teams and they made it count on the scoreboard in the 30th minute.

Winger Bevan French – back from the shoulder injury that rendered him a virtual passenger against Canberra a fortnight ago – continued his strong start to the match when he latched onto a swinging Corey Norman cross-field kick in spectacular fashion to plant the ball just inside the dead-ball line.

The blue and gold hit the front when Mitch Moses took on the Tigers line and popped a miracle offload for Michael Jennings to score, though the conversion was missed for a 12-8 margin five minutes before the break.

A penalty to the Tigers on the stroke of half-time allowed Marsters to boot his third goal of the half and close the gap to 12-10.

The Eels suffered a less-than-ideal start to the second half; it started with news Williams would not return from the injury suffered late in the first half and compounded with a Tim Mannah error from the first play.

The subsequent repeat sets to the Tigers finished with Matt Eisenhuth strolling through a yawning gap untouched after receiving a lovely no-look ball from Luke Brooks to reclaim the lead 16-12.

The Eels reclaimed the lead in the 60th minute when a very late Manu Ma'u offload created the chance for Brad Takairangi's four-pointer.

Benji Marshall stole the lead back when he crashed onto a lovely Mahe Fonua offload in the 65th minute.

Ma'u – putting in his best performance of 2018 so far – carved his way past Marshall off a nice Norman pass to put the Eels back in front 24-22 from the fifth lead change of the game.

Needing to either score again or hold the Tigers out for the final 10 minutes, the Eels managed to do the latter despite some nervous moments to join the Bulldogs, Sea Eagles and Cowboys on two wins while the Tigers remain in fifth. 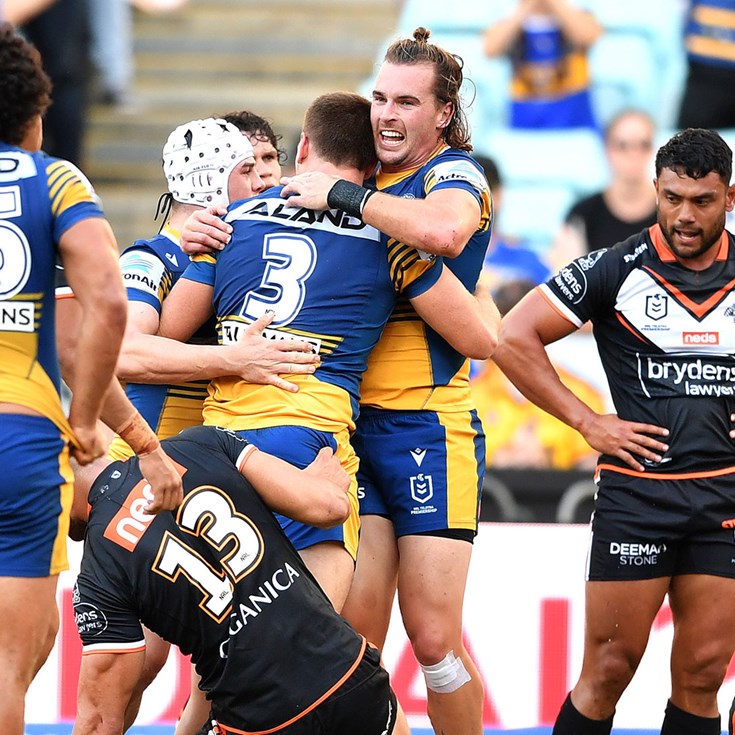