Clint 'King' Gutherson's crown is slightly dented after he made a schoolboy error which handed Adam Elliott the match-winning try in the Bulldogs' gritty 20-12 victory over the Eels at ANZ Stadium.

Gutherson merely had to fall on the Josh Jackson grubber to ensure a goal-line drop-out. But he took an air swing trying to kick the ball dead and Elliott grounded it to break the 12-12 deadlock. Elliott had only returned to the field from an HIA assessment minutes earlier and could scarcely believe his luck.

Gutherson had scored the opening try for the Eels and it seemed he would help the club keep a pulse in their 2018 Telstra Premiership season.

Instead Brad Arthur's side now sits at 2-8 and it seems they are running out of oxygen. Then again, history shows they are the only side to make the top-eight from such a poor start, recovering from 2-8 in 2006 to play finals footy.

The Eels would need to win 11 of their remaining 14 games to make it happen.

It was erratic end-to-end football from both teams but that's because the game had that 'last chance saloon' feeling with the Eels and the Dogs having registered only two wins each in nine rounds.

For Eels fans trudging home on Friday night, they will be ruing the disallowed try to Michael Jennings in the 55th minute. Referee Ashley Klein awarded it, believing he had beaten his former NSW Blues teammate Josh Morris to the ball.

But replays from the bunker showed Jennings glanced the ball with his right hand, before grounding it with his left, constituting a knock-on.

It was a massive moment that would come back to haunt the Eels.

The Bulldogs ran out to an 8-0 lead quickly through an early Brett Morris converted try along with a Moses Mbye penalty.

A superb try to Clint Gutherson, set up by a quality offload from Brad Takairangi got the Eels rolling and a sideline conversion from Mitchell Moses closed the gap to 8-6.

It took the Eels only five more minutes to take the lead after Daniel Alvaro's offload found Gutherson who put Bevan French away. Another sweet sideline conversion by Moses made it 12-8 to the Eels..

French somersaulted in scoring his third four-pointer for the season, as if to emphasise the mood the Eels were in. They had not lost to the Dogs since 2015 and looked intent on continuing that dominance.

A Mbye penalty right on halftime drew the Dogs within two points.

There the score stayed for another 25 minutes before Mbye kicked his third penalty of the night to draw scores level and that stalemate remained until Gutherson's brain explosion turned the game on its head.

News & Notes: Josh Morris remains stranded on 99 tries for the Bulldogs – he is looking to become only the third player behind Hazem El Masri and Terry Lamb to tally a century...Centre Michael Jennings has scored a try in his past three games for the Eels but had one disallowed to stop him making it a fourth....Eels forward Tepai Moeroa passed an HIA assessment, but teammate Daniel Alvaro failed his. Beau Scott (right shoulder) left the field in the 24th minute and did not return. 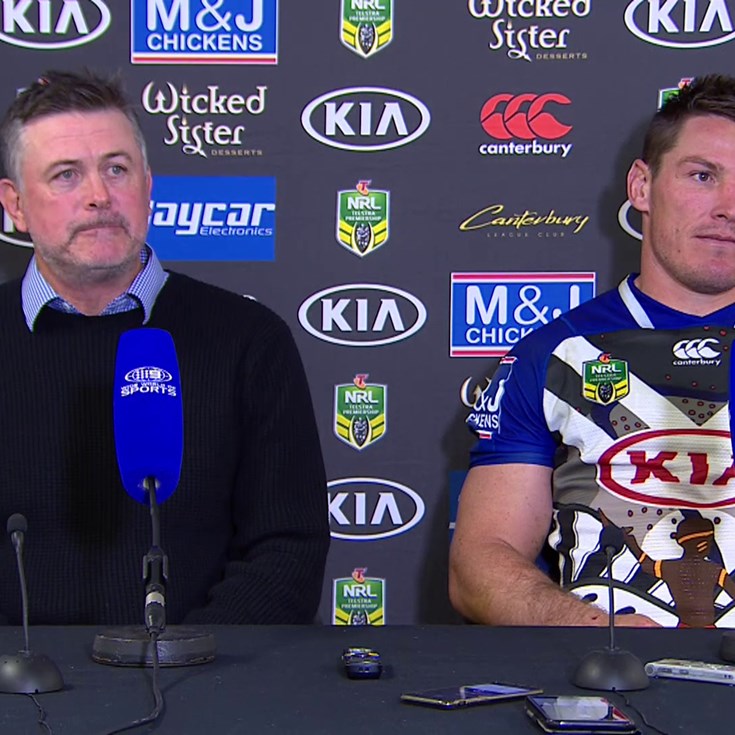 Arthur: Both teams are going to be very desperate