Just when the doubters started dismissing them as pretenders, the Wests Tigers shut a few mouths with last week's 20-12 dispatching of a desperate but still out-of-sorts Cowboys side at a chilly Leichardt Oval.

Not only did they halt a three-match losing skid, the Tigers delivered exactly the kind of committed and spirited performance that should reinforce their belief in each other and coach Ivan Cleary's system.

They will be in enemy territory this week, but the Tigers will want to ensure former Penrith coach Cleary's 'homecoming' is one to savour.

The Panthers bounced back from a round nine home loss to the Cowboys with last week's road win over Newcastle, but they had to earn it every step of the way.

It will probably be a similarly tight tooth and nail battle against the never-say-die Tigers.

Key match-up: All eyes will be on Panthers young gun Nathan Cleary in his comeback from a knee injury layoff. Cleary's return will mean a centre shift for Tyrone Peachey, who has been one of Penrith's best players this season. Cleary and James Maloney are up against Luke Brooks and Benji Marshall, and everyone will be wanting to see if Cleary works his way back slowly or comes out and has the type of game that brings a smile to the face of NSW coach Brad Fittler.

For the Panthers to win: They avoided their customary slow start last week and went on to claim an important road win over a dangerous Newcastle. The Panthers have to come out with the same purpose and readiness on Thursday or they'll be forced to play catch-up with one of the best starting teams in the business.

For the Tigers to win: The Tigers need to play with patience and precision, but they need to do so in an up-tempo manner to try to keep the Panthers guessing in defence and possibly wear them out. Big forwards like Russell Packer will take any opportunity to run at Cleary and test his knee, while the speedy Brooks will be keen to see if Cleary's lateral movement is up to scratch.

Panthers stat attack: Trent Merrin was an inspiration for Penrith in last week's road win over the Knights, running for a team-leading 165 metres. It was only the previous week Merrin suffered a compound dislocation of his finger. James Fisher-Harris led the Panthers with 38 tackles.

Tigers stat attack: Centre Mahe Fonua was a hit with Tigers fans in last week's defeat of the Cowboys at Leichardt Oval, running for an impressive 230 metres but it hasn't been enough to keep him in the team after he was late to a training session during the week. The Tigers missed 48 tackles to the Cowboys' 29 in the 20-12 victory.

And another thing: He misses tackles more than any other NRL player (daylight is second) and is known to give away a penalty or two, but James Maloney is still one of the NRL's best clutch players. The veteran play-maker has been a rock for the injury-riddled Panthers and no-one could ever question his physical and mental toughness, especially under pressure. A close-up camera angle of a slightly bloodied Maloney lining up a conversion – with one eye swollen half-closed – against the Knights was a neat snapshot of the two-time grand final-winner's career.

The Panthers will start 1-17 after Jarome Luai and Kaide Ellis were dropped from the squad an hour before kick-off. Nathan Cleary's long-awaited return in the halves pushes Tyrone Peachey to centre, Isaah Yeo to back row and Viliame Kikau to the bench. Hooker Peter Wallace is out injured with Sione Katoa to start. Wayde Egan and Jack Hetherington (suspension) rejoin the bench with Kaide Ellis and Jarome Luai dropping out. Tyrone May and Nick Lui-Toso were dropped from the squad 24 hours out from kick-off.

Kevin Naiqama was a late withdrawal from the Wests Tigers side. Michael Chee-Kam has been named to take his place in the centres. Naiqama joins Tim Grant as the two players left out of the squad an hour from kick-off. Centre Mahe Fonua has been dropped despite a man-of-the-match effort last week to accommodate Kevin Naiqama's return. Josh Aloiai and Tyson Gamble were omitted from the squad 24 hours out from kick-off.

Steve Turner's prediction: Penrith welcome back Nathan Cleary from injury and the inclusion of the number seven will only strengthen the second-place Panthers who once again showed last weekend that they're a premiership contender. The Wests Tigers bounced back after three losses in a row with an impressive win over the Cowboys at Leichardt, but it will be a tough trip to the foot of the mountains for Ivan Cleary's men.
Tip: Panthers by 8 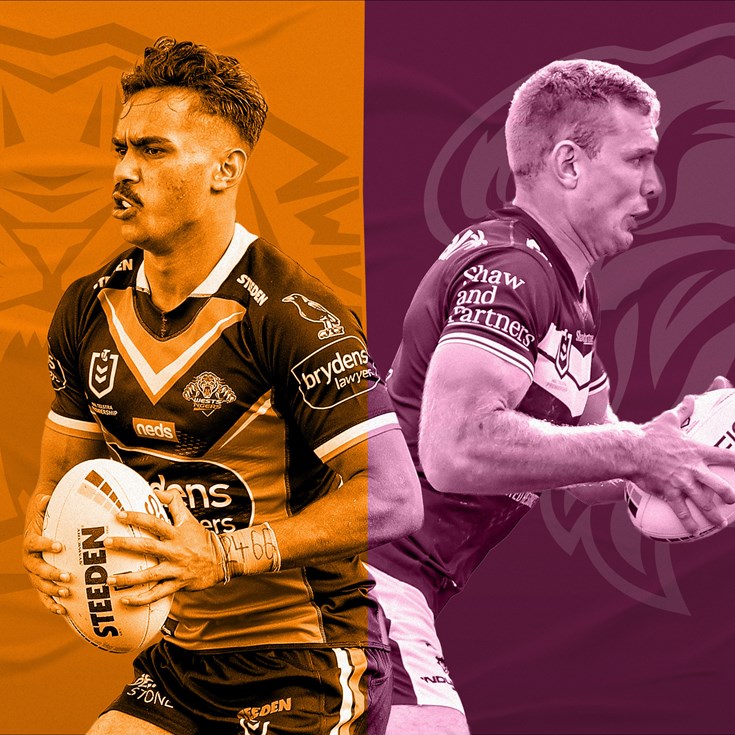