With just two weeks until teams are named for the Holden State of Origin series opener and NSW set to unveil a radically different line-up of centres and wingers, NRL.com Stats analyses the contenders in the outside backs.

A series of explosive performances have propelled Melbourne speedster Josh Addo-Carr into Origin contention, with 10 tries in his past five games. Needless to say, his tallies of tries and line breaks are the best of the candidates and his 126 metres per game compares favourably as well, with only two regular wingers averaging 150+ metres. He impressed new Blues coach Brad Fittler in City Origin camp last year and his raw, blistering pace could add a serious point of difference to the NSW attack.

Powerfully built Raiders teenager Nick Cotric has looked made for Origin virtually from his NRL debut. His 98kg frame belies his 19 years and is perfectly suited to the tough early-set carries required from Origin wingers. His 65 tackle busts are easily the most of any winger (second best is Addo-Carr's 44) and he is second among all players behind Kalyn Ponga's 73. Seven line breaks, four tries and 101 metres per game stacks up to a fine all-round return.

As the form of the Roosters and they're hulking young centre Latrell Mitchell has built through the year, so has the Origin hype around him - growing from a whisper to a dull roar. The raw-boned 20-year-old Taree product has the size and fend of a young Greg Inglis – a man to whom he has been compared from a young age – and while he is far from the finished product he is very hard to handle and provides an X-factor in the backline. His 47 busts are the fifth best of any player and best of any centre this year with five tries and two try assists.

A breakout 2017 has resulted in Cronulla product Curtis Scott emerging as a genuine option for Brad Fittler at left edge. The same age as Mitchell and almost as big, the former Australian Schoolboys rep has the advantage of coming from the professional Storm system. He is one of the best defensive centres in the Telstra Premiership already and is more than capable of breaking the line, although his attacking stats are down compared to last year. His stunning left-edge club combination with Josh Addo-Carr could work in the favour of both men.

Croker is a perennial candidate; a sharp-shooting goal-kicker with a happy knack of finding the try-line, it is his perceived defensive frailties that seem to count against him. He wowed former Maroons and Kangaroos coach Wayne Bennett in All Stars camp in 2016 with the Brisbane mentor labelling him an Origin player. His six tries and 30 busts in attack stack up favourably but again his defence is the question mark in 2018 as the only left-centre candidate (and one of the few centres NRL-wide) with a tackle efficiency below 80%.

Roberts has been included here as a left centre following a recent switch at club level but is more at home on the right where he is also jostling for selection. Four tries, more busts than any NRL centre other than Mitchell and a more-than adequate defensive record combined with blistering pace make him a popular option among fans.

Dugan is very much the safe option, having performed well at right centre for NSW and Australia in recent seasons. The biggest thing counting against him is a foot fracture that could put him out of contention for game one. His right-side combination with close mate Blake Ferguson has often proved fruitful on the field and troublesome off it – a factor which could make Fittler wary of picking the pair in the same team. Despite a perception of Dugan as a strong runner with little creative ability, and despite an injury-interrupted season so far at Cronulla, Dugan has more try assists and line-break assists than any other Blues centre candidate this year.

From Dragons centre Euan Aitken has been in sensational form for the Red V this year, bursting through for seven tries (the best of any centre) and breaking 32 tackles. He is a powerful runner and hard hitter and the fact he is one of the very best defensive centres in the game is appealing. He is a notorious non-passer though – Jason Nightingale scored 16 tries on the Dragons' left wing last year but has just one in 10 games since being switched to Aitken's side.

Bird has been there and done it before but has had well-documented form and fitness issues this year. An interrupted season and a few positional switched in a battling Broncos side ensure his 2018 stats are nothing to write home about and he'd need a big turnaround over the next fortnight to come under serious consideration for a starting spot (though he remains a candidate for the bench utility role he filled in all three games last year).

Walker is a bit of a forgotten man in the Blues back-line jigsaw puzzle. Fans are quick to point out his failed stint as a bench utility in game one 2016 and while that one-off appearance proved to be as big a selection blunder as it looked on paper, it is not Walker's fault he was picked out of position. A specialist centre who is at best a reluctant back-up anywhere else, he has a wonderful passing game, great instincts and serious speed and acquitted himself well at centre in game two 2016 marking up on Greg Inglis. Manly's 2018 woes certainly won't work in his favour.

Statistically, Ferguson is the dominant winger in the competition right now, let alone among NSW candidates. His 194 metres per game are the best of any player while his six tries and 32 busts are right up there as well. He was player of the tournament in the 2016 Four Nations and has performed strongly for NSW in recent years. A couple of prior off-field issues blot his copybook but he couldn't be doing much more on the field to stake his claims.

Trbojevic will almost certainly be in the team and has the advantage of being able to play every spot in the back five. He was a fantastic winger in his early NRL days deputising for Brett Stewart and had a solid spell in the centres for the club in 2016. He also scored a try at centre for Australia against Lebanon in the recent World Cup. His nine line breaks this year are second among all players behind only Addo-Carr and his six try assists are better than plenty of specialist halves and second to only Kalyn Ponga among fullbacks. Along with his brother and lock Jake, they are players the Blues could build a dynasty around. 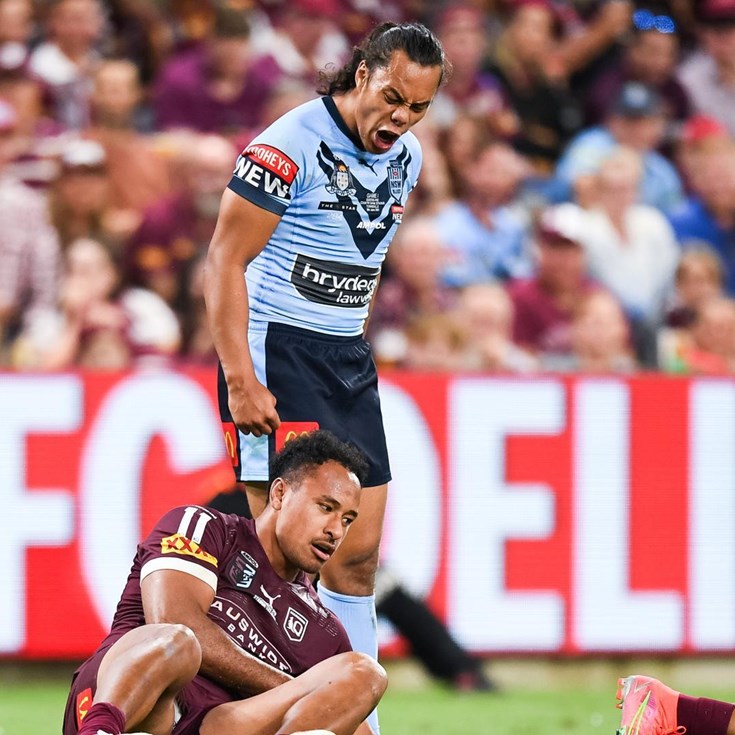 Presented By Amazon Alexa 13 hours ago

Presented By Hisense 13 hours ago