Gold Coast coach Garth Brennan was summarising not just his prize halfback Ash Taylor but perhaps his team's chances of being "on" as surprise a finals hope.

We'd seen what we're used to from Taylor – big spiralling kicks, marshalling his teammates with authority. The acute grubber kick was to follow.

Then, in the 38th minute, he ran the ball deep in Newcastle territory not once, but twice, in the same set.

A shimmy and dummy on the right. Two tackles later, a dart and a left-handed offload in a two-man tackle to send Dale Copley over for a try.

In the coach's box Brennan pumped his fist and smiled.

For weeks he'd taken a line out of Forest Gump the movie and had been telling his halfback, 'run Ash, run."

"If a half doesn't run, the defence just worries about the support runners," Brennan said.

"But if you have a half who genuinely runs and they have to worry about you, it opens it up for those around you."

Taylor was definitely on last Saturday. That try, a kick to the left for Alexander Brimson to score the match-winning try. A field goal to seal the victory. He even nailed a couple of goals from out wide after Michael Gordon handed him the role after suffering a cork to his kicking leg.

Taylor knows the score. He is an avid watcher of video of football and opposing halfbacks. A genuine student of the game.

He's smart, mature, confident, skillful and ambitious. And he has the speed and strength to trouble any defence not just with his boot and the ball out of his hands, but his feet and running anticipation… when he's on.

"I have been wanting to do it for a long time but I haven't found the right time," Taylor said about his ball-running.

"I really want to take the line on now.

"The great halfbacks of the game like Johnathan Thurston and Cooper Cronk do run the ball. I need to make sure I have the option to run the ball at all times."

And then he agreed that Penrith's comeback kid Ivan Cleary has been more consistent in big-play moments.

"You have to be more consistent as a half, he's been playing some great footy the past couple of seasons," Taylor said of Cleary.

"Him being a rookie like me doesn't mean I can't learn off him too, and all other halfbacks in the NRL.

"I have been watching a lot of footy in the last month and just want to keep adding stuff to my game.

"I'm still finding my feet as I try to be that dominant half."

Perhaps Taylor has been worried too much about the big picture. Like emulating the great Thurston. About playing for Queensland. About being his team's main man.

He admits it can be a distraction, although no one can doubt his focus to improve.

Sometimes relying in instinct, and the moment right now rather than the moments that may or may not come, can add up to more in the long run.

"It can be pressure from outside to perform, you can let it be a distraction," Taylor admits.

"There are different stages when you have to step up as an individual and provide the big plays at times and I have probably been off that the last month and Garth has challenged me about that."

The 38th minute, Titans v Knights, May 19. A turning point or a moment that just fades?

Fox Sports commentator Matt Russell summed up Taylor's try-creator this way: "Ash Taylor stands up when his team needs it."

Taylor wants to, and knows he needs to, stand up more consistently. 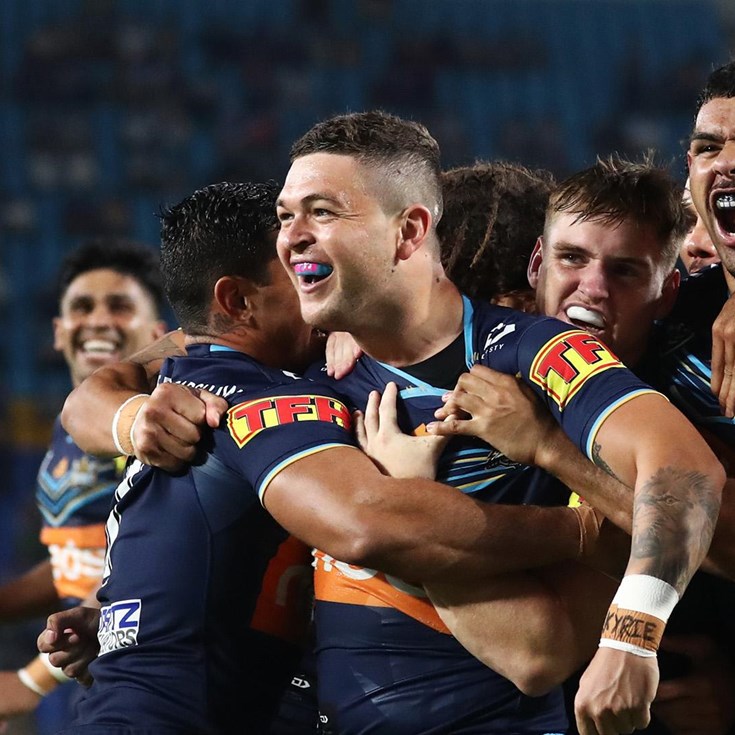