Kalyn Ponga was bursting with pride when he landed in Melbourne to join the Queensland squad, declaring himself ready to answer an SOS call in the wake of Billy Slater's withdrawal from the State of Origin opener at the MCG on Wednesday night.

Ponga touched down in Melbourne on Monday night and said he would love the opportunity to play in the Origin arena.

"Mentally, I am ready for Origin," Ponga told NRL.com at the airport.

"Physically, I pulled up well from the game on the weekend. I'm feeling on top of the world being picked for a team like this.

"It's pretty surreal at the moment, it's late so I'm keen to get to the hotel and see the coaches.

"A lot of emotions are going through my head, but I'm keen to see the team and get some rest.

"I'm pretty proud. It's a proud moment for me to even be invited into the Queensland camp and be around such great personnel."

The 20-year-old Newcastle Knights star has been tagged as a front runner to be the next Maroons fullback when Slater retires from representative football at the end of this year's Holden State of Origin series.

Whether he gets to make his Origin debut on Wednesday night remains to be seen as the Maroons hierarchy mulls over how to reconfigure their back-line after Slater's withdrawal with a hamstring strain.

The Maroons are considering playing Michael Morgan at fullback and using either Broncos five-eighth Anthony Milford or Ponga on the bench.

The other permutation being tossed around is to throw Ponga in at fullback and leave Morgan in the vital number 14 role where he has been a revelation for Queensland in seven of his eight Origin appearances.

In Milford's favour as a bench option is the fact he can play several positions and coach Kevin Walters showed what he thought of the Broncos star by giving him a starting debut in game one of last year's State of Origin series.

Maroons selector Darren Lockyer said recently that Ponga was essentially a fullback at this stage, so if that is still the mindset in the Queensland camp his chances of playing at the MCG may well be as a fullback or not at all.

Ponga has lit up the NRL this year in his 13 games for the Knights and his speed and verve would be the perfect antidote to the young and quick NSW backline elevated by Blues coach Brad Fittler.

A left field option for Queensland would be to play Greg Inglis at fullback and switch Morgan to the centres, where he played game three in last year's series.

The Maroons will hold their captain's run at the MCG on Tuesday morning where their intentions should become clear.

On announcing his retirement from representative football last week Slater said Ponga was a Maroons star in waiting.

"There is a lot of hype around Kalyn at the moment and he is a fantastic young player and doing some great things," Slater said.

"He is only about 20 games into his NRL career and has a bright future ahead of him and I have no doubt he will play for Queensland one day, whether that be this year or next year." 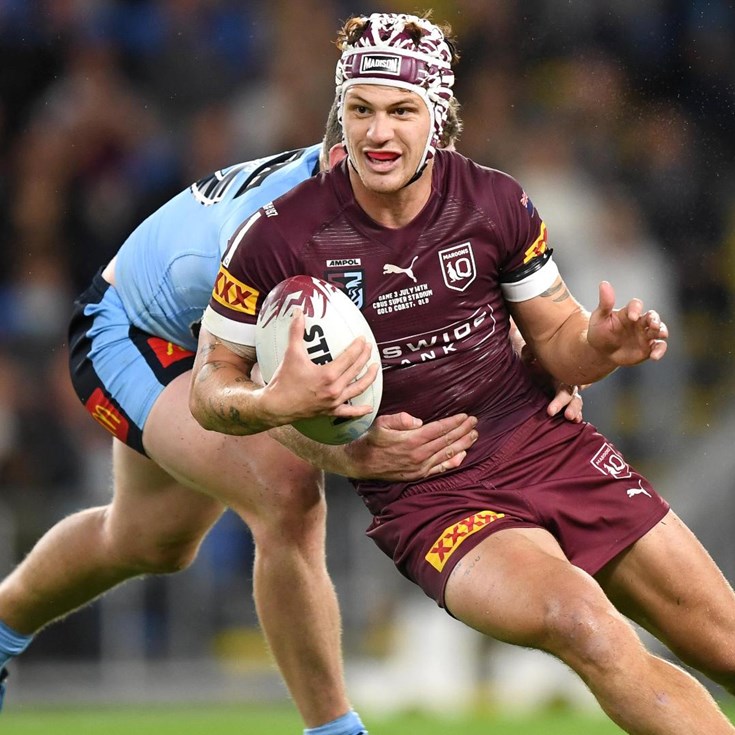