After blowing last year's series, the Blues are in the same situation again heading into Sunday's game two, although this time there's no Cameron Smith or Johnathan Thurston to bring the Maroons back from the brink.

It's no point theorising if they learned a lesson or not because most of NSW's 2017 players weren't chosen for this series. Let's just say the selectors must've learned a lesson.

This Blues team hopes to do what Queensland did for the previous decade or so by starting their own multi-year dynasty, eventually leaving indelible footprints as one of the all-time great NSW sides.

But if they get ahead of themselves for a moment the Maroons will make them pay – as they often have over the years, even before Smith and Thurston broke into the Origin scene.

Queensland coach Kevin Walters has made a couple of much-needed team changes from game one and is hoping it has the desired effect. Can't wait to see when 20-year-old superstar in the making Kalyn Ponga comes off the bench for his first taste of Origin footy. Bring on Sunday night!

Key match-up: Experience versus X-factor. When the result is on the line, few players seal games better than the king of crunch time James Maloney. The Panthers pivot has the uncanny knack of making each team he's part of a winning one. His duel with Melbourne playmaker Cameron Munster will go a long way toward determining the outcome of the all-important game two.

For the Blues to win: Good as it must feel to be up 1-0 in the best of three series, NSW might be better off with the approach that it's still 0-0. That might be the only way to stamp out any cockiness lingering from their 22-12 game one victory. James Tedesco might not reach his Man of the Match heights from game one, meaning other players will have to be ready to step up. When the Blues briefly fell behind in game one there was no panic and they better be armed with exactly the same poise and belief on Sunday.

For the Maroons to win: There's nothing like the fear of failure to bring out the best in elite athletes. The Queenslanders know the series hinges on this game and will be desperate to avoid heading home to Brisbane for a dead rubber in game three. Inglis has to lead from the front like he did so stoically in game one, but he needs help from every one of his teammates if Queensland are to keep the series alive. They can't afford to let Tedesco get his confidence up like he did in the first game and the forwards have to stand up and be counted.

Queensland Stat Attack: Billy Slater will play his 30th State of Origin match, the 10th Maroons player to do so and the 11th overall. Meanwhile Kalyn Ponga is set to become the youngest Queensland Origin debutant since Israel Folau in 2008.

Inside The NRL - Representative Round

And another thing: The largest crowd to watch a State of Origin match was 91,513 in 2015 at the MCG, while the smallest was 16,559 at Lang Park in 1984. NSW hold the record for most points scored in a single game when they beat the Maroons 56-16 in game three in 2000. That was also the game when Ryan Girdler racked up an Origin-high 32 points in one game – an individual record that will almost certainly never be broken. Cameron Smith holds the record for most games played (42), while Greg Inglis has scored the most Origin tries (17). Petero Civoniceva was the oldest Origin player at 36 in 2012 and Ben Ikin was the youngest at 18 in 1995.

Steve Turner's prediction: The Blues will be full of confidence, following an impressive win in the opening game of the Origin series. James Tedesco and Damien Cook were outstanding and the key for the blues will be to not be complacent and go to another level. They were in the same position as last year and unfortunately couldn't get the job done. Queensland need to improve out of sight. They need more from their forward pack and they need more from their spine to take control of the game. Without Cameron Smith, Cooper Cronk and Johnathan Thurston, the Maroons need to find the next leaders and this responsibility falls on the shoulders of Ben Hunt and Cameron Munster. There is no greater opportunity for the blues than to take the series on home soil this weekend. TIP: Blues by 8 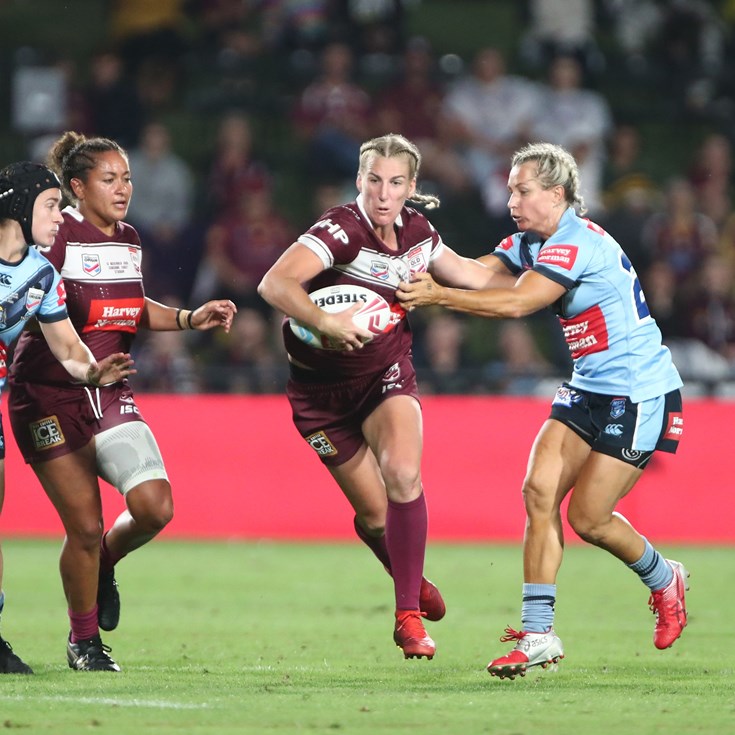 Everything you need to know: Ampol Women's State of Origin 2021

Munster confident for Origin but injury concerns still at Maroons