Papua New Guinea have cruised to a 26-14 victory in a one-sided affair over Fiji in the Pacific Test match at Campbelltown Stadium on Saturday afternoon.

Kumuls debutant Junior Rau scored a double as the PNG outfit ran in four tries in the opening half to set a comfortable win. They didn't score a point in the second.

It was a special victory for Michael Marum's men as it marked the first occasion without former Canberra raiders centre Kato Ottio, who died in January after suffering heat stroke in PNG after a training run before he was due to link with Widnes in the Super League.

The Kumuls players wore black armbands as a tribute to Ottio on Saturday.

New Fiji coach Matt Adamson, who took over from Mick Potter who took the Bati to the World Cup semi-finals, will be left disappointed with his side's showing in his first game in charge.

In a further blow for the Fijians and Manly coach Trent Barrett, winger Akuila Uate left the field in the first half with an ankle injury.

Jarryd Hayne had a quiet night out despite a promising start at halfback, overshadowed by PNG playmaker and five-eighth Lachlan Lam.

The Kumuls took 13 minutes to open the scoring with Watson Boas taking on the left edge to find Rau who charged his way over in the corner.

PNG went back-to-back minutes later when captain James Segeyaro kept the ball alive for Luke Page to hit and spin his way to the line for a 12-0 lead.

The advantage could have extended even further but Willie Minoga was ruled to have knocked the ball forward before regathering it.

Some late contact from Eloni Vunakece on Boas enabled the Kumuls to go further in front with a Rhyse Martin penalty goal.

An error from PNG winger Richard Pandia allowed Fiji to get on the board in the 32nd minute with centre Tyrone Phillips forcing his way over from a set scrum play.

But Fiji's momentum was short lived with PNG responding with two quick tries before half time to race out to a 26-4 lead.

Rau went over for his second try after some sharp footwork to come back in-field and plant the ball down in the corner, before captain Segeyaro split the Fijian side up the middle to find Justin Olam in support for the side's fourth of the afternoon.

Fiji were denied two tries early in the second half but finally hit their groove with Hayne kicking through for Marcelo Montoya to dive over in the left corner.

Hayne also had a hand in the next try 15 minutes later to Suliasi Vunivalu [68th minute] which narrowed the gap. But despite a weight of possession behind them in the second half Fiji couldn't add to their score.

It was the Kumuls' second consecutive win over the Bati side after a two-point victory last year.

News & Notes: Fiji and Manly back Akuila Uate hurt his ankle in the first half and didn't return.... PNG fullback Justin Olam suffered a right leg injury (57th minute) and had to be helped off by the trainer... The Kumuls had 10 players from last year's World Cup quarter final against England... Fiji fielded nine from their World Cup semi-final against Australia... PNG have two players on debut: winger Junior Rau and lock Rhadley Brawa... Fiji had three forwards in King Vuniyayawa (NZ Warriors), Tui Kamikamica (Melbourne Storm) & Pio Sokobalavu (Dragons). 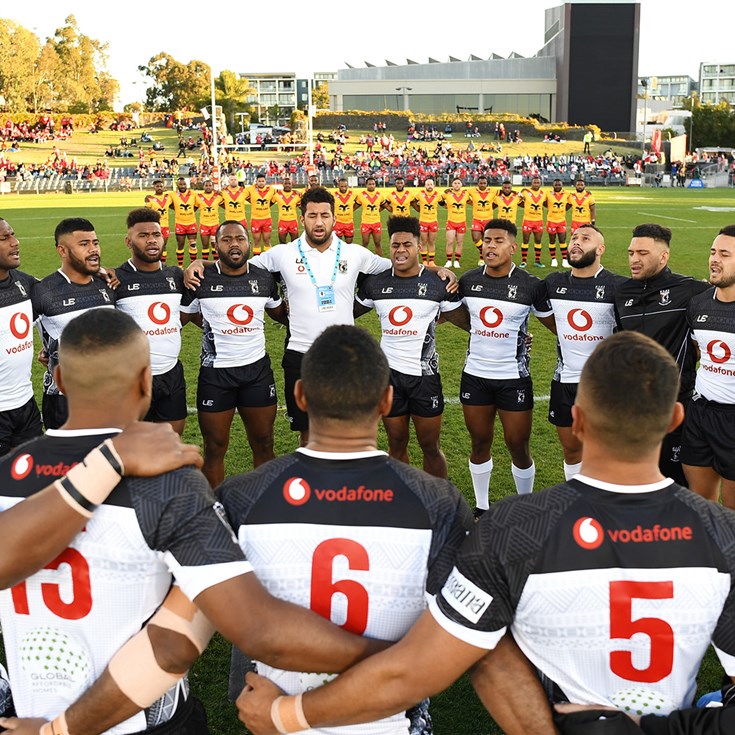