The influence of Allan Langer will still be felt by Billy Slater when he runs out for his final State of Origin match, 31 years after the former Maroons half lit a fire in the belly of the departing Queensland captain.

Slater was nostalgic little more than 48 hours before the curtain comes down on his illustrious representative career in game three of the Holden State of Origin series at Suncorp Stadium on Wednesday night.

Langer, who is in camp with the Maroons, continues to inspire Slater's career as it comes to a close.

"He was a player I looked up to as a kid. I drew inspiration from Alfie. He was so small and courageous. That's what I wanted to emulate. He showed that it was possible for the small kids.

"I dreamt of being Allan Langer running around the backyard, kicking the footy and scoring tries.

"That was just my childhood and this is the jersey I dreamt of playing in when I was a little boy. I am just so grateful and privileged to have this opportunity. I am 35, played league all my life since I was four."

"That was pretty important to me. There's not too many players who get to play 30 Origins," Slater said.

"That's 10 years [worth] straight without missing a game. It is hard to do that at NRL level, let alone Origin level. I am very proud of that."

"I was fortunate enough to play alongside Ty in a couple of Origins. I think we even combined when Ty scored under the post and that was pretty special," he said.

"Innisfail has been a great supporter. I haven't lived there for 20 years but mum and dad still live up there and they are right behind me.”

The Maroons captain confirmed regular captain Greg Inglis had arrived in camp, while he also responded to questions on the alleged cooling off in the relationship between the Slaters and Cameron Smith's family.

"I am not going to stand here and gossip about other people's relationships, as far as I am concerned I am okay with everyone.

"I have learned a lot over the years [about captaincy] playing under Cam, under [Darren] Lockyer. They are great leaders of men."

Slater: Cam and I are fine

Slater is already wondering about what his thoughts will be on Wednesday night.

"I have thought about walking out of the tunnel and what I will be feeling," he said.

"It's been a big part of my life the last 15 years. I just feel super grateful and privileged to be able to achieve what I have, to be a member of the teams I have been with and the success that we have had.

"It's been such a great ride. I am sure a few emotions will run through my body when I do run out and sing the national anthem.

"Hopefully we can go out there and make it a memorable occasion, not only for myself but my family and the team." 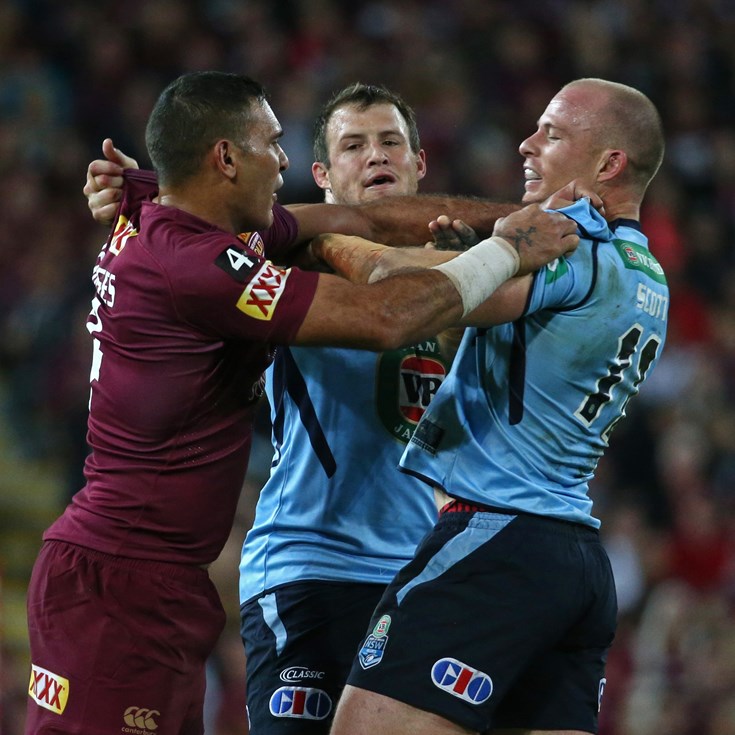 Slater unfazed by critics over man of the series award