Matt Moylan has come back to haunt his old club as the Sharks survived a scare to beat Penrith 24-12 at Panthers Stadium on Friday night.

The former Panthers skipper was greeted by an array of boos at the foot of the mountains that continued to flow throughout the game. But now the Sharks five-eighth he brushed aside the reception to score a try and lay on another late in the 12-point win.

Moylan crossed in the 54th minute to enable a 12-point lead with a quarter of the game remaining, and put his former side to bed with a try assist to Valentine Holmes five minutes before the full-time siren.

It was Cronulla's fifth straight victory over the Panthers.

In a heated clash, tensions boiled over at halftime with Andrew Fifita shoving Jack Hetherington in the tunnel as both sides were walking back to the sheds.

Hetherington took the first run to start the second half with a no fear attitude and Penrith were able to build some momentum for a four-pointer through Waqa Blake to peg the score back to 12-6.

But Moylan's try extended Cronulla's lead as Penrith were trying to get back into the contest.

A repeat set allowed Corey Harawira-Naera to cross with Tyrone May delivering a pin-point pass on the edge as the Panthers got within reach in the 68th minute.

Rookie halfback Jarome Luai continued his live-wire effort to almost level the scores, but a final kick to Christian Crichton was spilled over the line.

The inexperienced Panthers couldn't put in a repeat performance after last week's effort to beat the Warriors against a more professional Sharks outfit, who laid on two first half tries to skip to a 12-2 lead at the break.

Penrith slotted an early penalty goal through Luai but their enthusiasm proved their downfall.

Edrick Lee resisted the urge to reach out in a double movement action and the Sharks were rewarded for the discipline with Cronulla spreading the ball for Sione Katoa to dive over the line in the 19th minute.

Cronulla continued to surge against Penrith's line to get their second shortly after - Moylan linking with another former Panther in Wade Graham to send Holmes over for his first of the night with a pet-play inside ball.

That is now 14 tries in 16 games for Holmes, as he showed little fatigue from his 14-point haul for Queensland in Origin III 48 hours earlier. Penrith was without the services of NSW trio James Maloney, Nathan Cleary and Tyrone Peachey.

Penrith debutant Caleb Aekins had a sound debut despite spilling a Moylan kick in the opening half, running for 303 metres from 26 carries on debut.

Sharks prop Aaron Woods was equally as impressive with a strong performance up front.

News & Notes: 20-year-old fullback Caleb Aekins became the Panthers' sixth NRL debutant this year... the two Sione Katoas on the field was the first time two same-name players played each other since the Jeremy Smiths in 2007 (South Sydney v Melbourne)....backrower Jayson Bukuya (shoulder) didn't return for the second half... Cronulla have won eight of their past nine games against the Panthers. Crowd: 11,742... the Sharks host Canberra next week while the Panthers travel to Brisbane for the Broncos. 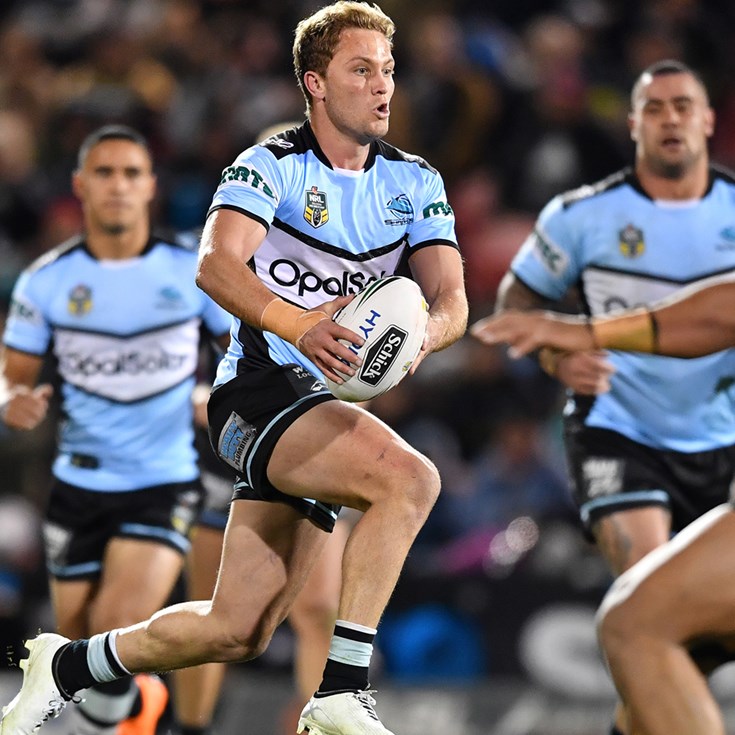