Darius Boyd will return to the position he once played as a junior with Brisbane Broncos coach Wayne Bennett moving his captain from fullback to left centre to solidify the defensive line in the home clash with the Penrith Panthers on Friday night.

Jamayne Isaako will move to fullback and Jordan Kahu to the right wing with James Roberts coming back into the side at right centre after the NSW star missed the 26-6 loss to the Warriors to rest his ongoing Achilles issue.

Bennett said it was the side's defence on the left side that had been an issue in the loss to the Warriors. Kahu made a misread when Shaun Johnson put Gerard Beale over in the first half and the Kiwi international was also beaten by hooker Issac Luke when he scored.

Kahu was not the only Broncos player below par against the Warriors by a long stretch and is no stranger to right wing, a position he's played with great success on many occasions since 2015.

"I had been watching a bit of a situation develop and wasn't happy with it, and realised I had to do something about it otherwise it wasn't going to get any better, so I made the decision to put Darius in the centres," Bennett said.

"I just decided I thought we could tighten up our positioning in the centres a little bit and move Jordan back to the wing."

Boyd, who has played left centre at representative level with aplomb, will be taking a trip down memory lane when he lines up outside Anthony Milford.

"That was his original position as a kid growing up and where he played all his football," Bennett said of Boyd.

Isaako is regarded as a long-term fullback by Bennett and it is the position where he starred in the Intrust Super Cup last year with Souths-Logan. Bennett said the Isaako/Boyd switch would not be permanent but added that he had to make a few tweaks to his backline after what he saw against the Warriors.

Jack Bird did some modified training with the side on Tuesday for the first time since an operation on his sternum but Bennett said he would not be rushed back. It appears more likely the former Shark won't see any action until the 2019 season

Joe Ofahengaue (knee) and Tevita Pangai jnr (hamstring) both underwent fitness tests before Thursday's captains run and trained strongly. Bennett said they would take their place in the side with Pangai set to start in the back row and Ofahengaue named to come off the bench for what Bennett hopes is a better team display than last week at Suncorp Stadium.

"We don't like not playing well at home. It means a lot to us all, but we did and so we have to live with the consequences and show everybody that it does mean something to us," he said.

The Broncos re-signed teenager Payne Haas on a six-year deal on Wednesday, the same day it was announced Korbin Sims would be leaving the club in 2019 to relink with St George Illawarra.

"I am pleased for him," Bennett said.

"We resurrected his career a little bit here. Newcastle didn't want him two years ago and I was pleased we could bring him here.

"I would have loved to have kept Korbin. I love what he brings and he has a great rapport with everybody at the club.

"You put an offer of six years for someone else and you've got a salary cap. No-one is getting less every year, so we are going to have to keep making decisions like that. They are not ones that we like but the bottom line is we have to make them, otherwise we will have a club that is not anywhere near its potential, and you (the media) are going to be all over us like a rash." 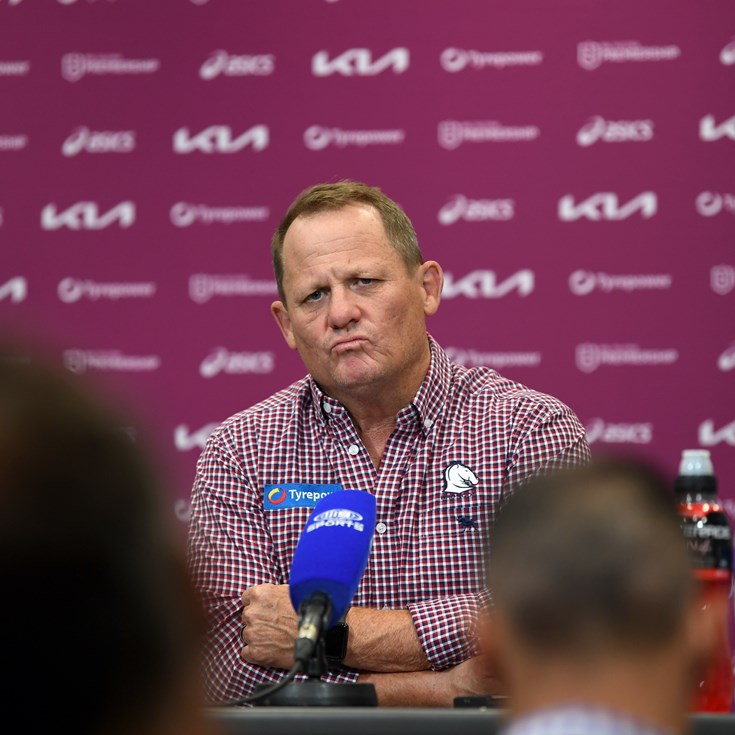