The Sydney Roosters' upset loss to the Raiders in Canberra not only means they missed a golden opportunity to get one hand on the JJ Giltinan Shield for the NRL minor premiership, but it sets up the closest finish to a season of all time.

In what is believed to be the first time ever, there is a mathematical possibility for all eight finals teams to finish on the same competition points.

For that unlikely scenario, with all eight teams ending up on 32, to occur:

• Roosters (32 points) would have to lose to Brisbane (home) and the Eels (away);

• Melbourne (32 points) would have to lose to the Titans (away) and Penrith (home);

• South Sydney (32 points) would have to lose to the Raiders (away) and Wests Tigers (home);

• St George Illawarra (30 points) would have to split their remaining games against the Bulldogs (home) and Knights (away);

• Penrith (30 points) would have to lose to the Warriors (away) and beat the Storm (away);

• Cronulla (30 points) would have to split their remaining games against the Knights (home) and Dogs (away);

• Brisbane (28 points) would have to win both their remaining matches against the Roosters (away) and Sea Eagles (home);

• Warriors (28 points) would have to beat Penrith (home) and the Raiders (home).

For-and-against records will be required to rank teams finishing with the same win-loss record – the Storm are just ahead of the Roosters and well clear of Souths in the race for first, the Dragons have a slight edge over Penrith and Cronulla on the next rung down while the Broncos are only nine points better off with their differential compared to the Warriors.

However the results fall over the remaining two rounds, one thing is clear – there is little certainty about where each team will finish.

While very few pundits thought the Roosters would lose on Sunday at GIO Stadium, coach Trent Robinson was not surprised by Canberra's gutsy performance which has set the cat amongst the pigeons in the scramble for the play-offs.

Lewis field goal wins it for the Bulldogs

"Obviously a highly talented team, a high-quality team, they know what they can produce," he said.

"It's a tough one for us to come down and fight our way back into it and not to finish it off was disappointing it off but it was a high-quality game."

The Warriors were also left to rue an upset loss on Sunday, going down 27-26 to the Bulldogs at ANZ Stadium.

"We'd like to get a home final but this loss has put a bit of a dent in our hopes of finishing in the top four," said Warriors playmaker Blake Green.

"But I think if we perform well enough to be in the top eight we can beat anyone.

"We just need to make sure we get the right results in the next two weeks.

"It can happen (missing the eight), I've seen it before. We can't rely on anyone.

"We've beaten some of the top teams this year and we are confident with what we've got that we can outscore anyone on our day." 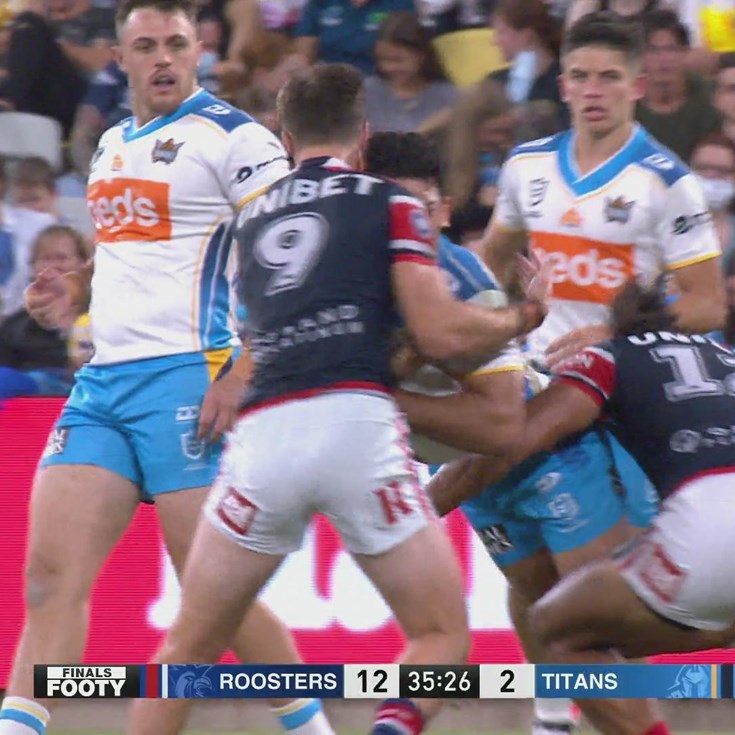