Sam Thaiday has warned Brisbane must have the right mental approach against Manly on Sunday or face being blown off the park like they were in round 10.

A possible home final awaits the Broncos if they can emerge victorious in Thaiday’s farewell club game at Suncorp Stadium but the veteran forward is well aware the last time the Sea Eagles ventured north the Trbojevic brothers carved them to shreds in a 38-24 win.

The Broncos have won eight of 12 games against top-eight sides this year, beating South Sydney, Cronulla and the Sydney Roosters on two occasions and the Warriors and Panthers once each.

It is a tendency to underachieve against the also-rans, as was the case in consecutive losses to the Bulldogs and Cowboys in rounds 21 and 22, that has Thaiday wary of a Manly side that is in turmoil on and off the field.

"We know that Manly are going to show up to Brisbane to play," Thaiday said.

"They have nothing to lose and are going to want to come up here and shake things up so we have to work on preparing for whoever we play, something we have been a bit disappointed in ourselves this year.

"They came up here last time and blew us off the park and we couldn’t go with them in the end and we have to make sure that doesn’t happen again.

"The hardest thing has been our mindset this year and making sure we prepare well against the teams we probably think we should beat but who we haven’t been great against. This is a big opportunity to get that right."

Thaiday conceded that acquiring the right "mindset" was an elusive quest and he didn't have all the answers to getting it, but taking personal responsibility for his own performance was at the top of his to-do list.

"That is something we have worked on the last couple of weeks is making sure our senior players in the group lead by example and I think we have done a good job of that, and the young guys have played off the back of that.

"That is what I will be trying to do, trying to make sure I do my job for the team and hopefully everybody else is thinking the same thing."

After defeating the Rabbitohs and Roosters in the past fortnight, Brisbane are emerging as a genuine premiership threat.

Based on their inability to string more than three wins in a row this year, Thaiday said it was vital that optimism was tempered with another reality check

"We don’t want to get too far ahead of ourselves,” he said.

"Even this morning when we went over our video [from the Roosters win] we didn’t want to harp on our good stuff. We still wanted to look at the stuff where we still need to improve."

Thaiday will be playing in front of his adoring fans and a plethora of family and friend who are flying in from far and wide to celebrate his career.

"Mum and Dad get down [from Townsville] during the week and I have a younger brother flying back from Germany. Family and friends are coming back from all over," he said.

The Broncos will be without Andrew McCullough who will sit out the match after being knocked out by a Dylan Napa tackle gone wrong on Saturday night. Jake Turpin, who made his NRL debut in the 34-nil win over the Titans in round 17,  has been named at hooker. 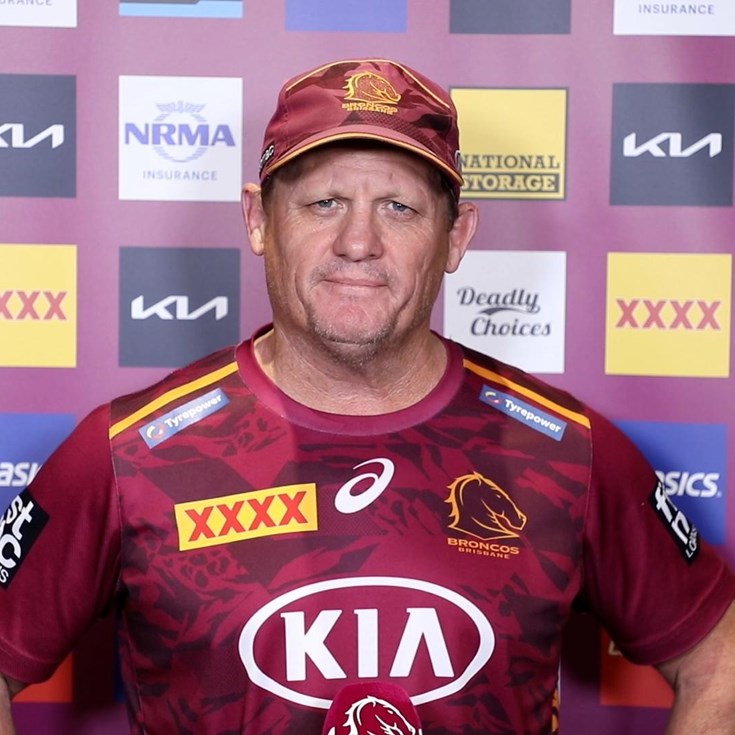