When Cooper Cronk left the Melbourne Storm and headed to Sydney, many thought the Storm’s golden era was coming to an end. How wrong they were.

The Storm have enjoyed another top-two finish and earned a home final despite not finding a permanent replacement for the talented No.7.

Cronk may be gone, but in Cameron Smith and Billy Slater they still boast two of the game’s elite players.

South Sydney’s return to prominence under the guidance of rookie coach Anthony Seibold has been rapid, and impressive.

Sam Burgess has turned in another impressive year, but it is the re-emergence of two bothers Tom and George Burgess that has played the biggest role in South Sydney’s success.

With their forwards firing, and a refreshed Greg Inglis back and ready to create havoc out wide, the Rabbitohs have every right to enter the finals feeling good about their chances.

Key match-up: Cameron Smith v Damien Cook. The two best hookers in the NRL each bring a different set of skills. Smith is the master game manager while Cook’s speed out of dummy half started dozens of attacking raids for the Rabbitohs in 2018.

For the Storm to win: The Storm forward pack need to stand up to what will be an early onslaught from the Burgess brothers. The trio are sure to be looking to establish dominance in the middle of the park in the first 20 minutes.

For the Rabbitohs to win: Greg Inglis looks to be ready to fire over the next few weeks. If he, Dane Gagai and Alex Johnston are able to find open spaces, South Sydney are capable of scoring some superb long-range tries.

Storm Stat Attack: While an undermanned Storm side was beaten by Penrith last weekend, there were some positive signs from a couple of Storm forwards. Lock Dale Finucane ran for 171m from 20 carries, while prop Jesse Bromwich (153m) also showed he is ready to the finals.

Rabbitohs Stat Attack: When it comes to using the ball – and making good use of it – the Rabbitohs were a clear leader in 2018. They led the NRL in points scored, tries scored, line breaks, total run metres and line break assists.

And another thing: If the Storm beat South Sydney and then win their preliminary final in two weeks' time, their trip to Sydney for the grand final will be their first game in the Harbour City since August 3. Their only trip out of Melbourne in that time was to the Gold Coast.

Storm: Brodie Croft has been elevated from the reserves to the starting halfback position, with Jahrome Hughes dropping out. Sam Kasiano has been promoted to the bench. Fullback Billy Slater (personal leave), winger Suliasi Vunivalu (hamstring) and five-eighth Cameron Munster (knee) return. Ryan Hoffman was omitted an hour before kick-off. Sandor Earl dropped off the reserves on Thursday.

Rabbitohs: The Rabbitohs will line up 1-17 and are unchanged from last week's big win over Wests Tigers. Braidon Burns and Tevita Tatola were cut an hour before kick-off, while Tyrell Fuimaone and Matt McIlwrick dropped off the reserves list 24 hours before kick off.

Craig Wing's prediction: Rabbitohs will win in a close one. Their attack is just so dynamic and the Storm are pretty much missing a half. Rabbitohs by 2. 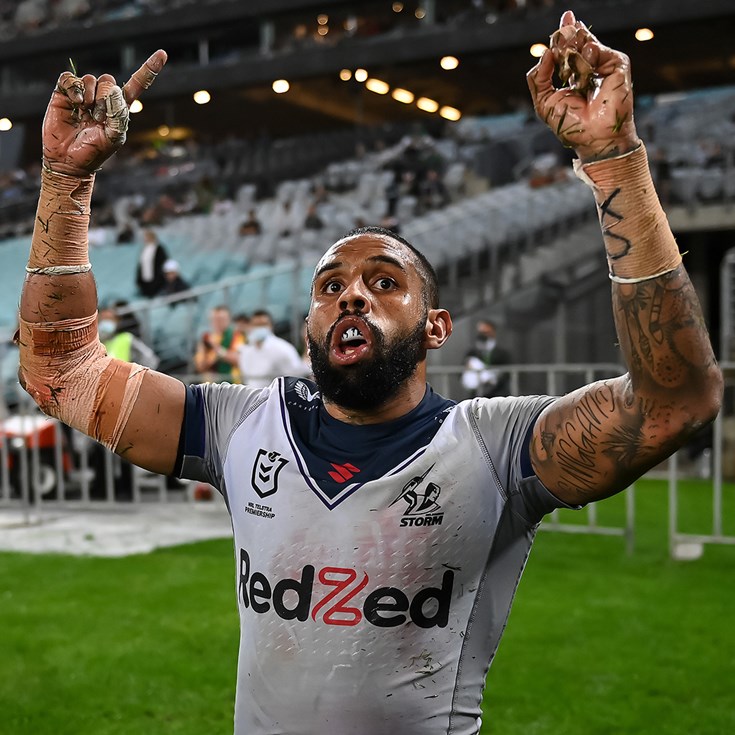