Melbourne will enlist the same lawyer that had Justin Hodges cleared to play in the 2015 decider to defend Billy Slater, as arch-rivals Cronulla say the retiring champion should be free to take his place in a farewell grand final.

Slater has been hit with a one-game ban for a shoulder charge on Sharks winger Sosaia Feki on Friday night, which will see him watching his NRL send-off from the stands unless he beats the charge at the judiciary.

The veteran fullback will be represented by high profile lawyer Nick Ghabar, who successfully argued Hodges' appeal three years ago when the former Broncos skipper faced the same fate over a dangerous throw charge on then-Roosters back-rower Aidan Guerra.

Ghabar has been called in for some of the game's biggest judiciary hearings in recent years, notably representing Canberra's Sia Soliola when he knocked Slater out cold last year with a high shot that earned him a five-week suspension.

Hodges knows better than anyone where Slater's head will be at over the next few days before the hearing on either Monday or Tuesday, and hopes his former Queensland and Australian teammate will be cleared by the three-man judiciary panel of ex-players.

"It's a tough one but I'd hope that he does get off," Hodges told NRL.com.

"You don't want to see a player like Billy Slater in his last ever game not playing in a grand final.

"I think the way he views his last year, that legacy will be ruined in his eyes. I don't think there was too much in it and it is hard when you're trying to make those types of tackles.

"It wasn't  a typical shoulder charge. It was Billy putting his body on the line.

"It's tough, your fate's in the hands of three guys on that panel and the people cross-examining you.

"It's a tough one, I just hope whoever's there on the night understands there was no malice in the tackle, it was a fullback trying to make a try-saving tackle. It's a bloody nervous time though, you're sitting on edge the entire time."

Meanwhile Sharks coach Shane Flanagan and stand-in skipper Luke Lewis both argued Slater should not be suspended in the wake of a 22-6 loss that ended their season and Lewis's career.

"I thought he had a hand in there actually, I just got a quick look at it," Flanagan said prior to Slater being formally charged by the NRL's match review committee.

"I thought he actually hit him with one shoulder and one hand. What do you want him to do there, I'm not quite sure? For his team he needs to save a try there and I think he did his best.

"100 per cent, he should be there. In the game he runs across and I thought he had his right or left arm in a push motion so he'll be there next week. Or he should be."

Lewis echoed Flanagan's sentiments, saying he "did not think there was anything in it", while Slater himself described his shot as "just an unfortunate collision". 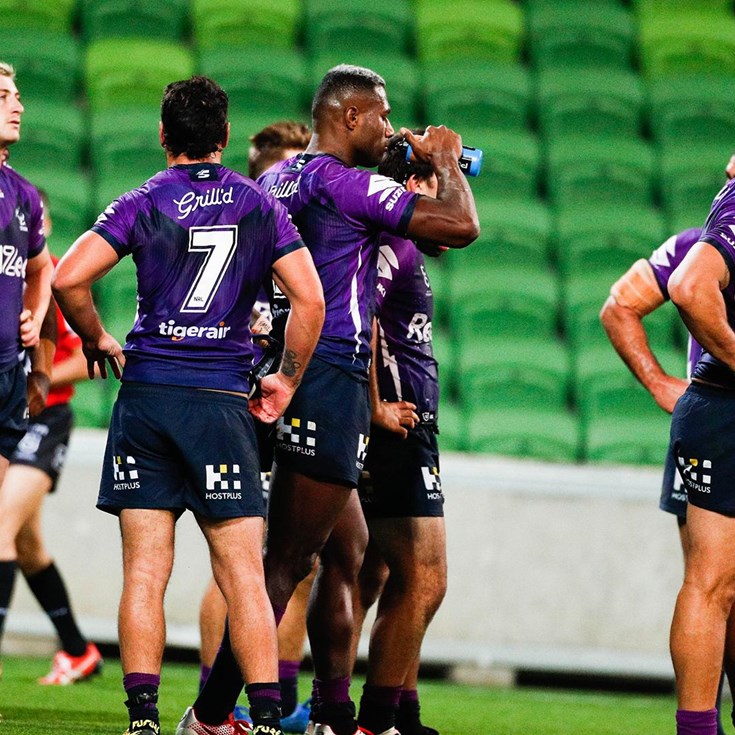