The famous Walters family continues to leave a legacy on Queensland football.

After brothers Kevin, Kerrod and Steve enjoyed stellar career in both the NRL and representative football, Kevin continues to serve as coach of the Maroons State of Origin side.

But to those not fully invested in the Walters story, there are two other brothers and of course parents who raised boys who went on to become parts of the history of the game.

Titled, The Makings of a Maroon Dynasty, this article first appeared in Rugby League Week on August 19, 1987

WHEN Kevin Walters Snr walked into his local Holden dealer earlier this year to order a new Commodore, he was asked the obvious question.

"Any colour preference?" the father of five Rugby League-playing sons was asked. It was State of Origin eve. Fever-pitch time. Needless to say, the new Commodore is maroon.

Kevin Walters, and his wife Sandra, are extremely proud parents. And maroon is a very special colour. Each of their five sons has paraded that colour for their beloved Queensland.

Two of the Walters boys, hooker Steve and halfback Kevin Jnr, are involved in the Canberra Raiders' chase for Winfield Cup honours, while Brett (winger), Andrew (second-rower) and Kerrod (hooker) are doing their level best to get the Ipswich Jets into the semi-finals in Brisbane for the first time.

In fact, 1987 has been the first season since Brett played under-18s for Queensland in 1980 that a Walters has not worn a Maroon jersey into battle against the Blues.

Steve and Kevin went close, though. They both starred for the Sydney-based Maroons in a State of Origin trial at Lang Park in May, but the final nod for rep spots went to the experienced Greg Conescu (hooker), while lifelong Ipswich family friend, Allan Langer, took the halfback berth and went on to be one of the players of the series.

The history of state representation is:

In those clashes against NSW, only one of the five brothers have emerged victorious and that was Brett in '80 and '81.

Andrew, or "Drew" as he is known to his family and close friends, is the last of the sons to have cemented a first-grade berth. He's made two recent appearances for the [Ipswich] Jets. His "late" blooming can be attributed more to a freak injury than any lack of ability.

The 20-year-old redhead - who once asked his mother if he was adopted because of his auburn locks - is lucky to be able to walk these days, let alone still be playing.

He was playing under-18s with twins Kevin and Kerrod for Ipswich club team Booval Swifts a couple of years ago when, in what the family describe as "a simple tackle", Andrew displaced vertebrae in his neck. As a result, he underwent intensive surgery on his neck, had a bone graft and was off the field for two years.

This is his first year back — but as a second-rower and not in his preferred spot, hooker.

Andrew has been a regular in reserve grade this season, with a number of appearances in the top grade as a replacement, and still hopes to make his long-awaited first-grade debut before the current season ends.

Although the injury left a nasty taste in the mouths of parents Kevin and Sandra, both accept it as one of those things.

"That is the most serious injury any of the boys have had. And until this neck problem, Drew had never had a sponge near him," according to Kevin Snr.

But the Walters boys have been reared tough.

We always encouraged the kids and did our very best to see them play. But with five, that was never easy

For a start, Ipswich is a working town. It's not a rough city by modern standards, but the tougher you are, the better your chances of making the local footie teams.

And as is the case in most large families of boys, backyard "Test" matches were an everyday event in winter.

"The twins [Kevin and Kerrod] used to get a terrible flogging from the bigger boys, but they always came back for more," said Sandra.

"I don't think they were allowed to play until they were six, and some of the boys in the neighbourhood who played then were in high school. Even though the bigger boys always gave the little blokes a fair go, I'm sure the little blokes learnt what being competitive was all about."

The irony of those backyard jousts was that Kevin - the kid described by his dad as a born captain - was always Tommy Raudonikis. And it was Raudonikis, the current Ipswich first-grade coach, who last year had to decide between young Walters and Allan Langer for the first-grade berth.

But the irony continues. Langer and his three brothers - two of whom played for Queensland - were also regular combatants in Meriton Street Tests.

And it was an ankle injury to Langer, in the final intra-state trial in 1984, that paved the way for a 16-year-old by the name of Kevin Walters to make his under-18s debut for Queensland.

Next season the great rivalry will continue when the Brisbane Broncos meet the Canberra Raiders. Kevin and Allan will be the respective scrum feeders.

And if Kerrod achieves his goal, of winning the Broncos' hooking spot next year ahead of Greg Conescu, then it could well be a real family confrontation when he opposes older brother Steve.

"That's what I hate the most," says dad Kevin.

"I usually enjoy the football so much, but not when the boys are opposed to each other. It hasn't happened too much in the past, but obviously, it will in the future."

But if the boys' mother had her way, twins Kevin and Kerrod, at least, would never be opponents.

"I was really wild when Kevin went to Canberra. I didn't like to see the twins split up. It didn't seem right," she said.

"Kevin told me he used to walk around the house in Canberra just before going to training looking for Kerrod. And I know how Kerrod felt, because he still lives at home," she said.

But the twins realised that sooner or later they'd have to split and with Langer throwing down a strong challenge for the halfback spot at Ipswich, he or Kevin would have had to play reserve grade, or move to another position.

On the other hand, had Kerrod moved south with his twin, he'd have had big brother Steve to contend with.

Older brother Brett, who these days pays more attention to his married life and his building business than to football, almost became a Raider two years ago, too.

He was told a contract had been sent to him in the mail, but when it didn't arrive Brett decided to take what was on offer at Ipswich. The day after he signed, the contract was hand delivered by big Mal Meninga. There had been a mail strike in NSW.

Although reaching nowhere near the height of any of his sons on the football field, Kevin Snr hopes that some of his advice and support may have rubbed off.

"We always encouraged the kids and did our very best to see them play. But with five, that was never easy. If it was physically possible to be there, we'd be there. And the kids always knew that," he said.

"And more often than not we'd pass Harry Langer between one park or another and he was doing the same thing." 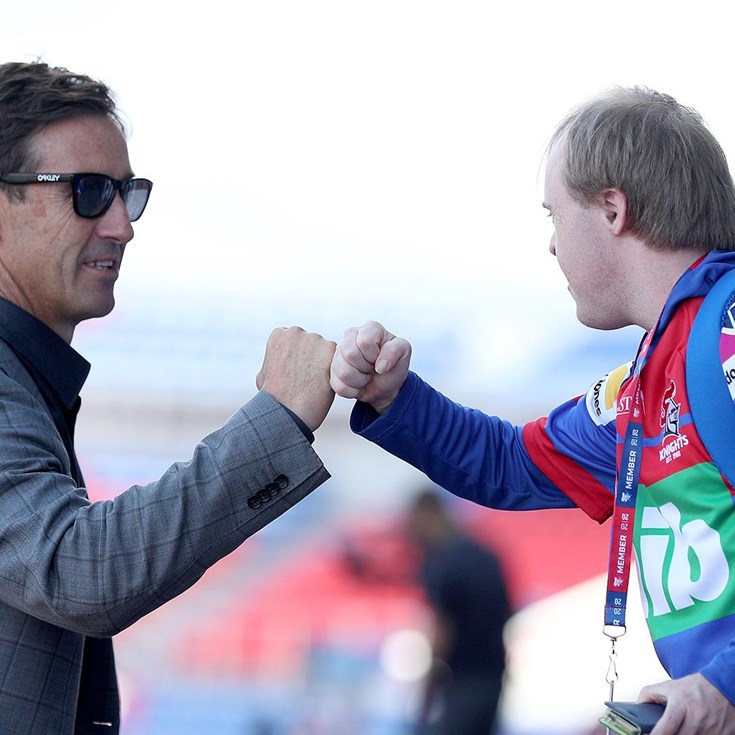