South Sydney training had just finished at Redfern Oval and as the players began their warm down, Wayne Bennett carried a large plastic garbage bin of equipment to the dressing rooms.

It wouldn't surprise if, after Friday night’s season-opening match against arch-rivals Sydney Roosters at the SCG, the Rabbitohs players sweep out their dressing room, as the All Blacks are renowned for doing.

According to the Souths players, Bennett didn't tell them to start helping the gear stewards after training. He just started doing it when he arrived at Redfern in early December and they followed his lead.

"I just think he tipped someone up by saying come and help me do this, and now everyone does it," five-eighth Cody Walker said.

"Wayne has bought that in and I think it is great. We get together as a group and five or six of us will grab the stuff, bring it all in and just help out wherever we can."

Hooker Damien Cook said that when the players saw Bennett packing away the training gear, they decided to help. Now it is a regular occurrence after each session.

"You always see Wayne just doing things like that, he gets the boys to help out with that sort of stuff," Cook said.

"It's only a little thing but there's very successful teams that have done it. The All Blacks clean their own shed after games and things like that are all about looking after yourselves. It's one club and you're one group, that's the idea.”

Asked whether the Rabbitohs players would clean out their dressing sheds after matches this season, Walker said: "The thing with the dressing room is that it is our area, so it is up to us to keep it clean".

However, it's not just after training that Bennett takes on the role most elite sports coaches delegate to other members of the coaching staff or club volunteers.

At the session NRL.com attended, Bennett ran off several times to grab a drink bottle for halfback Adam Reynolds or another player during a break in training.

He talked briefly with the player while waiting for them to have a drink and then took the drink bottle back to the sideline as training resumed.

It's a different environment at Redfern this season under Bennett, the longest-serving coach in the game, who has effectively swapped jobs with Brisbane's Anthony Seibold, the 2018 Dally M coach of the year in his first season as an NRL mentor.

Gone is the ghetto blaster on the sideline simulating crowd noise by blasting out loud music, or innovations like the bucket of soapy water to dunk the ball in so that players get used to slippery conditions.

Bennett spends a lot of time walking around in back play while his assistants Jason Demetriou and Willie Peters run the drills. Seibold was much more hands on.

When he first started at Souths after being sacked by the Broncos to fast-track Seibold's move north ahead of his scheduled arrival in 2020, Bennett spoke to his new group of players without mentioning the coming season.

"The first couple of times he spoke it wasn't about footy. It was more about our welfare and making sure we're good people off the field," Cook said. "He's a coach who's really player-first and that's what works its way onto the field."

Most of the Rabbitohs squad weren't born when Bennett became Brisbane's inaugural coach in 1988 after helping Canberra to the 1987 grand final as co-coach with Don Furner.

He has won seven premierships, six with the Broncos and his most recent at St George Illawarrra in 2010.

"He's respected, he respects others and that goes a long way in the game," said Sam Burgess, who has played under him for England.

Bennett might not be one to waste words but the players listen to everything he tells them and rarely disagree.

Bennett publicly criticised Burgess for conceding needless penalties during his first series in charge of England in 2016 and again spoke about how he needs to improve his discipline after the recent Charity Shield clash.

"As a player, I prefer that," Burgess said. "I don't need him to protect me, I need him to be honest with me and tell me what I need to do to be a better player for the team, for myself and for Wayne.

"People thought after that we weren't friends but before the press conference he told me what he was going to say and I agreed with him."

Burgess is part of the Rabbitohs leadership group chosen by Bennett, which also includes Walker and captain Greg Inglis.

"He empowers the leadership group a lot," prop George Burgess said. "He helps them make a lot of decisions. I think that's one of his best qualities - he lets the team decide the direction so that we really believe in it." 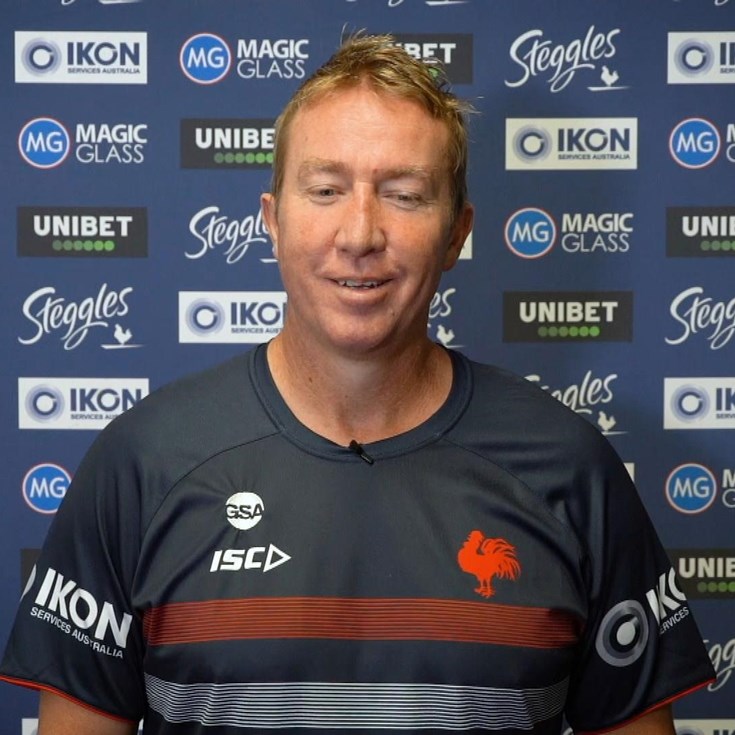