Newcastle game-breaker Kalyn Ponga has confirmed he will play fullback against St George Illawarra at McDonald Jones Stadium on Sunday but wants to revisit his transition to five-eighth.

Ponga, who turned 21 on Saturday, partnered captain Mitchell Pearce in the halves for Newcastle’s first two games against Cronulla and Penrith, and for the first hour of their 17-10 loss to Canberra at GIO Stadium last Friday.

Knights coach Nathan Brown moved Ponga back to fullback for the final 20 minutes against the Raiders and, after subsequent discussions with Ponga and Pearce, decided that is where the 2018 RLPA Players’ Champion will start on Sunday.

Ponga and Pearce addressed the issue with reporters in Newcastle on Monday at a promotion to launch the Alex McKinnon Cup, which will be at stake when the Knights host the Dragons.

"Everything's for the team and Browny just thinks that the way things are going, maybe putting me at the back might benefit the team, so we'll just try that out and see how it goes.

"I played a little bit there at the weekend. Just mentally, preparing for that role, I'd prepared mentally for five-eighth and wanting to learn there, but I just have to refocus and rethink now about what's important in that role [at fullback] and focus on that."

Because of his spectacular season wearing No.1 last season, in which he was runner-up in Dally M Medal voting and won the Danny Buderus Medal as Newcastle’s Player of the Year, Ponga's move to five-eighth has been under heavy scrutiny.

After a first-up 14-8 victory over Cronulla, the Knights have dropped games to the Panthers (16-14) and Raiders. Ponga has not had the same impact in attack as he did playing fullback but he remains unfazed by ongoing analysis of his performance.

"I don't listen to anything else because I don't really care about other people's opinions, so I haven’t really bought into any of it," he said.

"I know a lot of people are saying blah blah blah about me in this position and that, but whatever Browny wants, I'm happy to do.

"I want to obviously get better – everyone wants to get better – but as long as I'm learning along the way. I tried my hand at half and I learnt a lot of things there that I might be able to take back to fullback position and vice versa.”

Asked if the door was permanently closed on playing five-eighth, Ponga said: "No, I don't reckon. I like that position. I like being in the front line and you're in the game a bit more, but whatever's best for the team, I'll play there.

"You've got to do your job. If Browny put me in the nine jersey, I'd refocus my mind to do that. I think if we all do our jobs, no matter who's in what position, we’ll put ourselves in a position to win.'

Pearce stressed the experiment had not failed, and there were other reasons why the Knights had not yet clicked in attack.

"But from my point of view as captain, it's round three, we've got a long process to go, we've been doing some good stuff in games, there's some other stuff we'd like to do a bit better, and we've got an opportunity this week to come out and hopefully put 80 minutes together.

"There's some clunky stuff with our attack but it's about this week and putting that together and hopefully improving on last week." 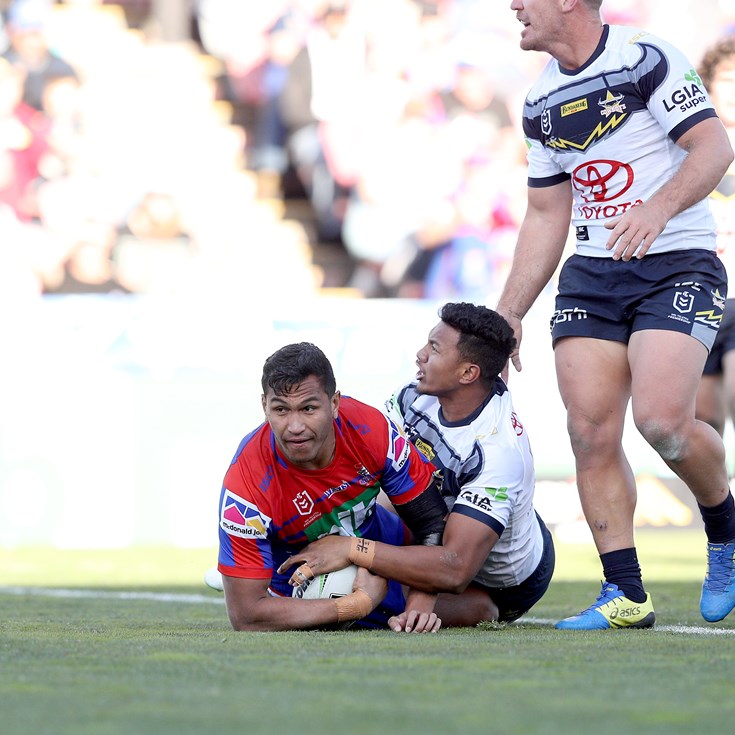 'I'm good at being me': Ponga won't bow to outside noise