What a difference a year makes.

This time last season the Raiders and Eels were languishing at the bottom of the ladder, and here they are 12 months later boasting identical 3-1 records and preparing to meet in the match of the round.

The Raiders were all business disposing of the slumping Cowboys last week and should return to a big home-town crowd on Sunday.

In the blue and gold corner are the Eels, who have clearly put last year's horror campaign behind them.

With both teams in good form, this has the potential to be a Sunday night cracker.

Raiders: The Raiders are 1-17. Joe Tapine (thumb) was close last week and will play in jersey 17. Bailey Simonsson and JJ Collins dropped off the extended bench on Saturday, while Royce Hunt and Aidan Sezer dropped off one hour from kick-off. Canberra have won their past four games against the Eels.

Eels: The Eels brought David Gower into the 17 with Oregon Kaufusi and Josh Hoffman the final two names to drop out on game day, in the only change from last week. Brad Takairangi will play his 150th NRL game. Ray Stone and Bevan French were omitted from the extended squad 24 hours prior to kick-off.

Some interesting battles all over the park with Michael Jennings against Joseph Leilua and rookie hooker Reed Mahoney facing off with one of the world's best in Josh Hodgson. But the crucial clash of halfbacks Sam Williams and Mitch Moses looms as the most intriguing. Williams has been rock-solid since returning to first grade in round three, while Moses has been on song all year for the Eels.

Defence has been their primary focus since round one and the offence has flowed from those defensive efforts. Only the Storm (40) and Wests Tigers (43) have conceded less points than Canberra (44) and Ricky Stuart will be demanding more of the same on Sunday. The Raiders will have to be especially strong against damaging wingers Blake Ferguson and Maika Sivo.

Ferguson and new Fijian sensation Sivo will be counted upon to do their usual work to get the Eels out of their own half, while Moses and Mahoney need to play their part in driving Parra forward. The Raiders have shown they have a thirst for defence this year, so the Eels might not create as many scoring opportunities as they usually do and need to make the most of them when they arise.

Parramatta played for 80 minutes last week, where the week before they played for about 60 against the Roosters. Parramatta play calm and composed, whereas with the Raiders you have Rapana and Leilua who can do anything at any time. The two No.9s, Reed Mahoney and Josh Hodgson, will turn on a great clash – the rookie verse the master. Raiders by 4

Starving the opposition of possession has been one of the keys to the Raiders' early-season success. The Green Machine lead the NRL in possession at 54% and are also first in dummy-half runs (77). They rank third in tackle breaks (137) and fourth in post contact metres (1,933).

While it's no real surprise to see Blake Ferguson leading the NRL in run metres (880), sitting in second spot is teammate Clint Gutherson (826). Gutherson is also equal-first in line break assists (5) and Ferguson is second in post contact metres (245).

On paper it would seem the Raiders have an edge in the hooker department but Josh Hodgson has a challenge on his hands against Reed Mahoney. The Eels rake racked up 59 tackles in the 24-12 defeat of the Sharks, while Hodgson led the way with 43 tackles in Canberra's win over the Cowboys and will be looking forward to his duel with Mahoney. 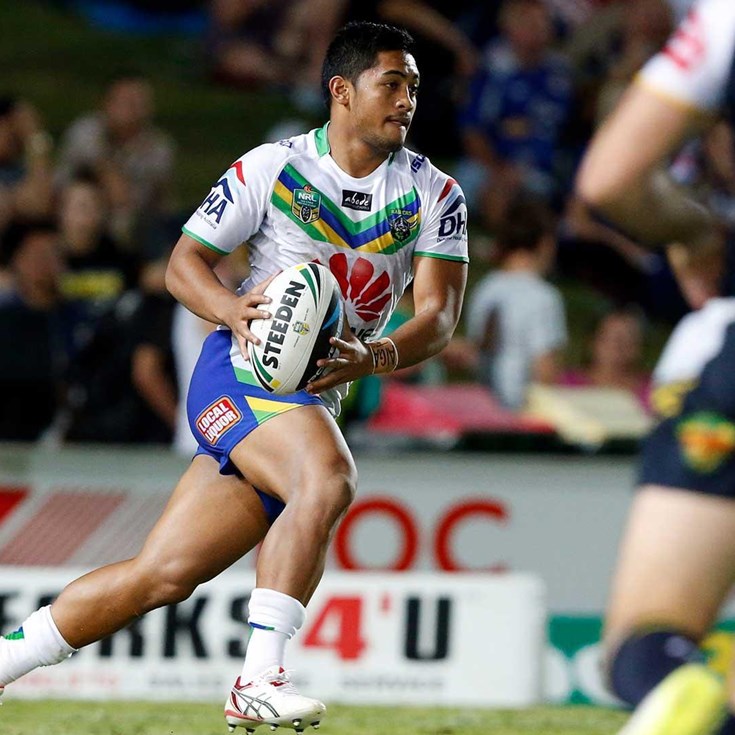