Storm great Cameron Smith became the highest point scorer in the history of the game as Melbourne made it five wins in a row with a hard-fought 18-12 victory over North Queensland in Townsville.

The Melbourne skipper landed a penalty goal in the 49th minute of the match to take his career tally to 2420 points, eclipsing the previous mark of 2418 held by Bulldogs legend Hazem El Masri.

Smith’s record-breaking goal levelled the scores at 8-8 before a piece of individual brilliance from Storm fullback Jahrome Hughes broke the game open in the 61st minute.

Hughes took off from dummy half 40 metres out from the Cowboys line and beat several defenders before putting in a perfectly placed kick for winger Josh Addo-Carr to follow through and score.

Although the Storm took control late in the match it had been a vastly different story in the opening stanza as their handling let them down badly and the Cowboys dug in.

Off the back of a sluggish start from the visitors, the Cowboys had the chance to respond with repeat sets in the seventh minute but were unable to find the line.

The Cowboys continued to put pressure on through their defence and a Smith error handed them possession inside the red zone.

Te Maire Martin posted first points in the 12th minute after a kick by Michael Morgan was contested by Gavin Cooper and the ball rolled loose in the in-goal for Martin to pounce.

A 40-20 by Morgan in the 33rd minute again gave the Cowboys field position and they came away with a penalty goal to stretch their lead to 8-0.

The Storm hit back on the stroke of halftime when Cameron Munster sent Will Chambers over with a sublime pass.

Smith levelled the scores with his record-breaking goal nine minutes into the second half before two tries to Addo-Carr gave Melbourne the upper hand.

The Cowboys breathed life into the contest when Jordan Kahu produced a miraculous flick pass to put Ben Hampton over in the left corner but the Storm managed to hang on.

Adding to the Cowboys' woes, a heavy collision between John Asiata and Nene Macdonald resulted in the winger being taken off on a medicab with a suspected break and dislocation of his ankle.

Play continued for a full set as Asiata and Macdonald lay injured and the Cowboys were unable to get officials to stop the match.

A clearly angry Cowboys coach Paul Green labelled it a "debacle and a disgrace" that the game was earlier stopped twice for a bleeding nose but officials played on when Macdonald was on the ground with a serious injury. 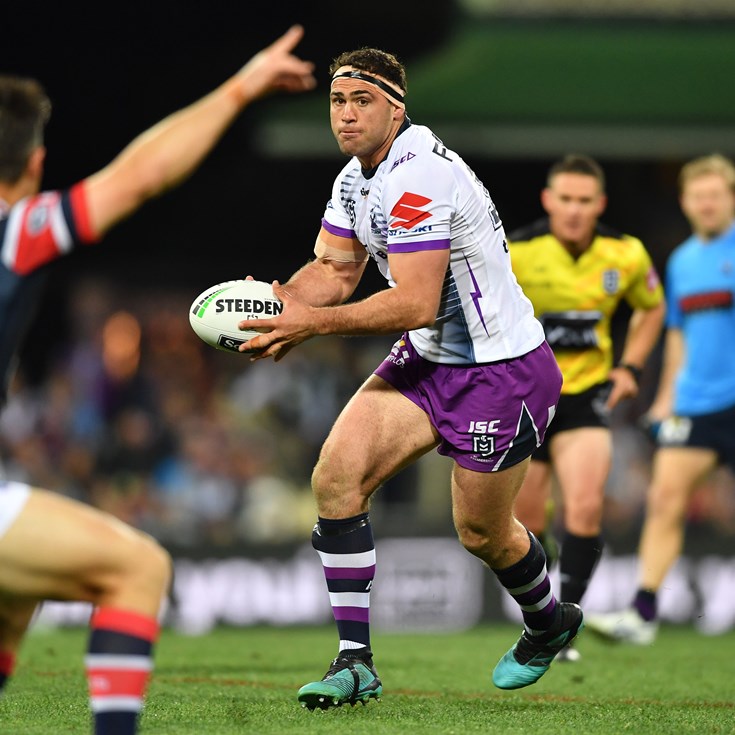 Smith on chat with Munster around McGuire incident