Hold your nerve and get your defence in order.

They are the key lessons club legend Shane Webcke says the Broncos can learn from the 1999 outfit that also lost five of their opening six games of the season.

It was worse than that in 1999, where the premiers slumped to last after round 10 with eight losses, a win and a draw. They also lost club legend Allan Langer to retirement along the way.

The Broncos then went on an 11-game winning streak to make the finals.

Coach Wayne Bennett made some tweaks to his side in their darkest hours, some due to injury including star centre Steve Renouf, but stuck with his core group of players. He used just 25 players that season, one less than eventual premiers Melbourne.

Webcke said it was vital coach Anthony Seibold, like Bennett in 1999, did not make mass changes due to outside pressures.

"Sometimes no matter how hard you try, things go from bad to worse," Webcke told NRL.com.

"We were in a far worse predicament in 1999 than where they find themselves now. When everything is going to crap you are tempted to panic and chuck out the baby with the bath water, but we didn’t do that.

"Wayne made sure we kept our heads. He said 'we know how to train to win and we know how we should be playing to win. We’re not doing that, but we have to make sure we stay the course'.

"You look at this Broncos team, and while you might tweak it a bit, there is no need for Seibs to make wholesale changes. All those blokes can play. There are players down on form, but it will come back. Sometimes you’ve got to hold your nerve, and the time for holding their nerve is right now."

In 1999 their defence was leaking big time with 233 points conceded in the opening 10 matches.

In their next undefeated 11 games they conceded 76, including two clean sheets.

This year the Broncos have conceded 141 points in six matches at 23.5 per game.

Webcke said "soft defensive errors" were costing Brisbane and once they sorted that out, the attack would take care of itself.

"The same thing that has always won rugby league games wins them now and that is defence," Webcke said.

Our club won’t accept that for much longer so they need to turn it around.

"What it is predicated on is not letting the bloke either side of you down. They all know how to tackle but sometimes a poor attitude in defence sneaks up on you.

"That is all you can say it is because some of those misses have been almost pathetic.

"I missed those tackles too sometimes, so I am not saying it is a problem that is peculiar to them and no other Broncos side that ever played. We all went through it, but when you draw the line in the sand and declare to yourself that you are not going to be the bloke that misses that tackle, and everyone takes a similar mindset, it is amazing how quick it will turn around."

The Broncos set a top-four goal each year and failure is not accepted by the club's hierarchy or their fans.

"I’m not apologetic. I’m not even sympathetic, but I am empathetic," Webcke said.

"I understand what is happening there, but the difficult thing about playing for the Broncos is that they don’t pay for potential. They want what you’ve got, and they want you to turn up with it every week.

"It is being held to those standards that have made that club. They need to look inward and be hard on themselves.

"We are talking about inches, and not metres, between playing well and playing like they are at the minute … but our club won’t accept that for much longer so they need to turn it around."

The Broncos are fielding a pack that contains three 19-year-olds in Payne Haas, David Fifita and Thomas Flegler and with that comes risk and reward.

"I am impressed with all those young forwards," Webcke said.

"We have passionate supporters who want results and want them now, but goodness gracious me there are some talented footballers there.

"It is a great thing for our future because we have got a very young football team who are going to mature together. One day they are going to be formidable, and they are capable of being formidable now. What they don’t have, like when I came through, is that hard-headed core of players that held it steady."

Renouf, who played his final year at Brisbane in 1999, told NRL.com that while there are not hard heads like Peter Ryan and Andrew Gee in this squad, the leaders still needed to stand up.

"Andrew Gee and Kevin Walters both did a great job as captains after Alf [Allan Langer] left," Renouf recalled.

"I had retired from Origin in 1999 and I remember talking to GG and making a pact that the senior players needed to really stand up before we played Penrith. We won 28-0 without our Origin players and we kept winning through that representative period.

"In 1999 it was a gritty 12-10 win against Balmain [in round 11] that turned it all around and that is what it will take for the current team. It is just one win. You look back at 1999 and it was the the senior guys like GG, Kevvie Walters and Wendell [Sailor] who played key roles. It is going to have to be the same today with Darius Boyd, Matt Gillett and Alex Glenn and those senior guys."

Boyd has to be better

Boyd put his hand up this week to lead the revival against the Sharks at Suncorp Stadium on Saturday night.

"I’ve missed a couple of tackles where I have gone for intercepts and the way I look at it is I am probably trying too hard," Boyd said.

"We are a young side. I am the captain. I am the leader and I’m experienced, so sometimes I probably try and pull a rabbit out of my hat instead of just doing my job and making the tackle.

"I can cop that criticism. That’s fine, but its not from lack of trying or lack of effort. It is more about trying too hard for my team. I’ve spoken to Seibs about it and I need to be better at that.

"I’m not losing sleep over it. It’s something that is a really easy fix. It is a defensive thing for all of us. If we defend well as a team I think we’ll get the job done pretty soon."

The 12-10 win at Leichhardt Oval over Balmain in round 11 of 1999 was an ugly kind of win that turned their season around.

In a twist of fate, it was an arm wrestle 12-10 win over the Sharks at Suncorp Stadium last year in round 20 that set the template for what is required on Saturday night.

"And that is what will turn things around now. It will most likely be the ugliest win but it will foster belief once again," Webcke said.

"They haven’t been blown away by anyone except the Roosters and that is important. They are not far off, and when they turn the corner it is likely they will win a few on the trot." 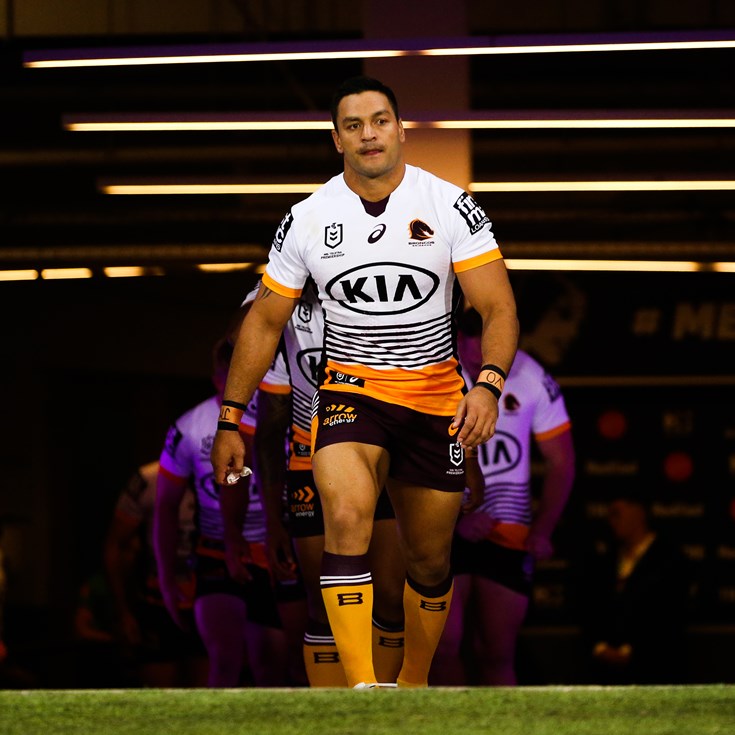