The first post-Origin round of 2019 is set to see plenty of team changes as some big guns return while others will get a rest.

Here are all the big talking points from this week's team lists plus the NRL Fantasy form guide for all 16 clubs.

Rabbitohs: Wayne Bennett has named all his Origin players to back up from Wednesday night's clash, in good news for Damien Cook and Cameron Murray owners in particular – although he does have plenty of options to make late changes with six reserves in a 23-man squad. Billy Britain scored 51 in Cook's absence last week, and while he could replace him again this round he may not get another chance in 2019. Sam Burgess will play this week before undergoing shoulder surgery, which will sideline him for at least a couple of games. Adam Reynolds has scored 53 points a game this year and is well-priced at $680k.

Knights: Origin duo Kalyn Ponga and David Klemmer are named despite coach Nathan Brown suggesting on Monday the team is planning to play without the pair, while Connor Watson replaces the injured Danny Levi at hooker and Jamie Buhrer joins the bench. Watson has a break even of 27, but his $458k price tag means he's still not really a cash cow (Siliva Havili at the Raiders is in a similar position but is cheaper with a lower break even).

Burgess and Cartwright run out of puff

Wests Tigers: Maroons utility Moses Mbye has been named to return at fullback, bumping Corey Thompson to the wing and David Nofoaluma out of the side. Luke Brooks is in surprisingly good Fantasy form, coming off scores of 53, 56, 75, 56 and 54. Ryan Matterson has played his way into the NSW squad as 18th man and has a three-game average of 59.7. Robbie Farah scored just 21 points in 46 minutes against the Rabbitohs last start, which is a major concern.

Raiders: Nick Cotric, Jordan Rapana, Jack Wighton and Josh Papalii return in place of Sebastian Kris, Michael Oldfield, Aidan Sezer and Corey Horsburgh, while Hudson Young is suspended for five games (and a must-sell) with Emre Guler joining the bench. Cotric (CTR/WFB) and Siliva Havili (2RF/HOK) are now both dual position players. John Bateman picked up where he left off in his early return from injury last week, scoring a try and 61 Fantasy points. His 67 break even means you can afford to wait for his $724k price tag to drop a little more, but he's a must-have at some point in the centres. Charnze Nicoll-Klokstad probably has more price rises in him after scoring 63 against the Bulldogs.

Warriors: Lachlan Burr is benched with Adam Blair named at lock, while Chris Satae replaces the injured Jazz Tevaga (ankle, round 16) on the interchange. Burr is now a sell if you've still got him. Roger Tuivasa-Sheck is among the elite Fantasy WFBs but with a break even in the mid-70s his price could drop to around $600k in the next few weeks – making him a tempting pick-up for the round 16 bye week.

Storm: No changes for Melbourne. Cameron Smith is a quality captaincy option as always, particularly with a lot of the game's stars either backing up or being rested after Origin I. Kenny Bromwich has earned a stunning $250k in price rises this year thanks to a 53 average.

Sharks: Josh Morris will be rested after Origin with Aaron Gray joining the backline and Josh Dugan lining up in the centres. Shaun Johnson and Wade Graham are both in the reserves and could be late inclusions in the starting side (likely for Kyle Flanagan and Kurt Capewell). Capewell is well on his way to losing all his early-season price rises. Bronson Xerri's break even is down to 12 after his last-start hat-trick. Andrew Fifita is another strong captaincy option this week.

Eels: Parramatta are unchanged, although Nathan Brown could be a late inclusion in jersey 21. Mitch Moses's 52-point average means he now sits between long-time keepers Adam Reynolds and Nathan Cleary in the Fantasy half rankings. Reed Mahoney is keeping his average above 50 and remains a hold for now.

Cowboys: Jordan Kahu (shoulder) and Gideon Gela-Mosby (fractured collarbone) are out with Michael Morgan moving to fullback and Enari Tuala named on the wing. Josh McGuire starts up front and Scott Bolton is benched, while Reuben Cotter joins the interchange and Corey Jensen drops to the reserves. Jason Taumalolo is in sensational form – he's averaging 85 in his last three, 72 in his last five and his 65-point average for the season ranks him second behind Damien Cook among all NRL regulars. Last week's 103 was one of the few Fantasy hundreds that didn't come as a surprise, and he's probably the safest captaincy option this week.

Sea Eagles: Tom Trbojevic is set to make his long-awaited return while Origin stars Jake Trbojevic and Daly Cherry-Evans are named in the reserves. Reuben Garrick replaces Abbas Miski on the wing and Jack Gosiewski starts at lock for the suspended Corey Waddell. Cherry-Evans has a massive 87 break even after copping an injury back in round 7, so there's a good chance his huge $874k price tag will drop quickly in the next few rounds. Addin Fonua-Blake's terrific season continued last week, with his 80-point effort pushing his season average up to 51.

Broncos: Origin debutant Payne Haas has been named to start while Andrew McCullough is on the bench, in promising news for those running with rookie rake Jake Turpin. Tom Flegler is also a new face on the interchange. Brisbane has a six-man reserves list so can make plenty of late changes. Tom Dearden's break even is down to 1 after his 54-point effort against the Warriors in round 11.

Titans: Jai Arrow is back at lock with Jai Whitbread on the bench and Jack Stockwell out of the side, while Nathan Peats could return (and take minutes off Mitch Rein) after being included in the reserves. Bryce Cartwright is now a sell for those who kept him for bye round purposes.

Panthers: Wayde Egan and Viliame Kikau return to the starting side, with Liam Martin benched and Mitch Kenny in the reserves list, while Hame Sele replaces Tyrell Fuimaono on the interchange. Nathan Cleary is only named in the reserves as he looks to back up from Origin. Kenny and Brent Naden were both given exemptions to play last week despite being outside Penrith's top 30 squad, so are unlikely to play when alternatives in their positions are fit. Brian To'o has a break even below zero and is still pretty affordable at $266k if you're keen for a rookie winger who can bust tackles.

Roosters: The Origin stars are named, while Drew Hutchison replaces Luke Keary (concussion) in the halves and Zane Tetevano and Mitchell Aubusson replace Lindsay Collins and Brock Lamb on the bench. Jared Waerea-Hargreaves fronts the judiciary on Tuesday night for his hit on Kalyn Ponga a week ago. Fantasy coaches will be desperate for James Tedesco to back up from Origin I.

Bulldogs: The Bulldogs are unchanged, although Dylan Napa could back up from Origin after being included among the reserves. Aiden Tolman is the only quality scorer at the cellar-dwellars so far this season.

Dragons: Tim Lafai's ankle injury means Zac Lomax returns to the centres with Matt Dufty at fullback, while Mikaele Ravalawa replaces Jordan Pereira on the wing. Origin trio Ben Hunt, Tyson Frizell and Paul Vaughan are only named in the reserves, with Corey Norman and Jai Field the starting halves and Blake Lawrie starting at prop for James Graham (fibula, round 20). Cameron McInnes is the third best Fantasy scorer of 2019 so far, averaging 62.6 including a stunning 98 against the Sharks in round 11. Reece Robson replaced the injured Tyson Frizell last start but could potentially cut into McInnes's game time at hooker this week. Ben Hunt is one of 10 halves scoring 50 points a game or better this year. 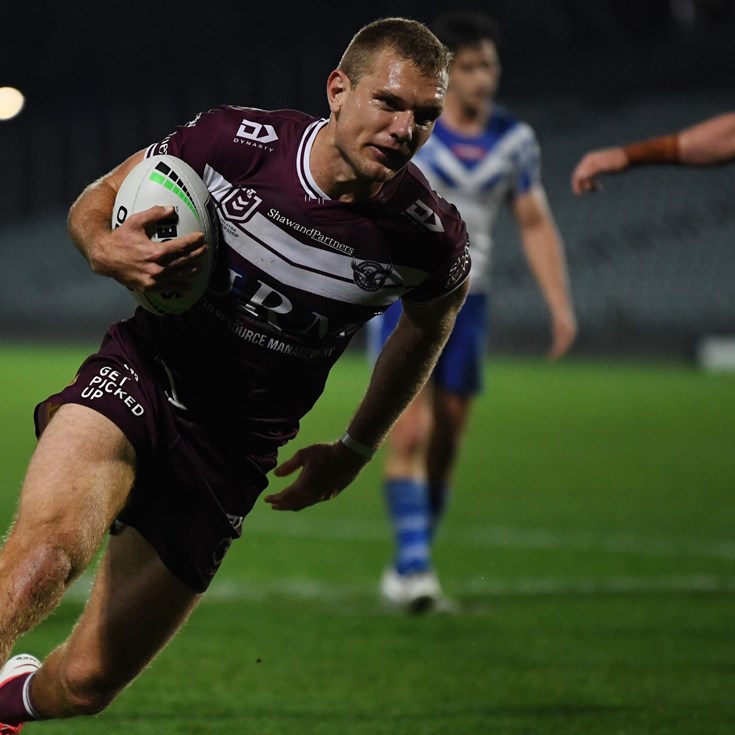