One of the more intriguing games of round 13, with both teams on six wins.

The injury-hit Sharks welcomed the bye last week and will go into Saturday's match on a winning note after beating the slumping Dragons in Wollongong in round 11.

Parramatta snapped a three-game losing skid with last week's defeat of the Origin-depleted Rabbitohs - their first victory since coach Brad Arthur re-signed with the club.

But some doubters reckons it was mere Fool's Gold because Souths had so many key players out. A meeting with the Sharks in enemy territory should provide a clearer picture of the Eels' form.

Sharks: Wade Graham will make his return from injury via the bench, with Blake Brailey making way. Scott Sorensen drops off the reserves list. Shaun Johnson's comeback has been delayed by at least a week after he was trimmed from the reserves with Sione Katoa on Friday.

Eels: Nathan Brown returns from injury, replacing Ray Stone on the bench, with Brad Takairangi, George Jennings and Tim Mannah dropping out of the extended squad on game day.

Mitch Moses started poorly against Souths but was arguably the best player on the field by game's end. On Saturday he's up against the very consistent Chad Townsend and Moses can't afford to take it easy. The other intriguing clash will take place on the fringes between opposing backrowers Briton Nikora and Shaun Lane.

Matt Moylan showed what he means to the Sharks with a standout performance in his return from injury against the Dragons. Cronulla have to be ready to match Parra's early power and aggression, while the creative Moylan and methodical Townsend need to keep the defence in two minds.

Brad Arthur never looked comfortable last week and you get the feeling it's because he knows better than anyone that his team is prone to switching off during games. It didn't happen last week and it's crucial for the Eels to show they can get up for two big games in a row. If things don't go their way in the first 20 minutes Parra can't afford to get frustrated and impatient.

We know the Sharks can play tough, but Matt Moylan’s return in their last game just gave them a little bit of finesse. He’s really important for their attack. It’s a big day for Mitchell Moses to see if he can stay composed and get Parramatta home. A big test for him, and the Eels. Sharks by 6

Cronulla prop Andrew Fifita leads the NRL in offloads (36), while the Sharks have a league-leading 138 offloads as a team. Eels hooker Reed Mahoney is the top tackler (574) in the competition, while teammate Clint Gutherson is setting the pace in run metres (2,135). Parra have committed more errors (152) than any other team.

Like most teams in 2018, Cronulla had Parramatta's measure, winning their first clash 14-4 before getting out of jail 22-20 in the second meeting. The Eels look much better equipped to handle the Sharks in 2019 but every team knows beating the Sharks on their own turf has always been much easier said than done. 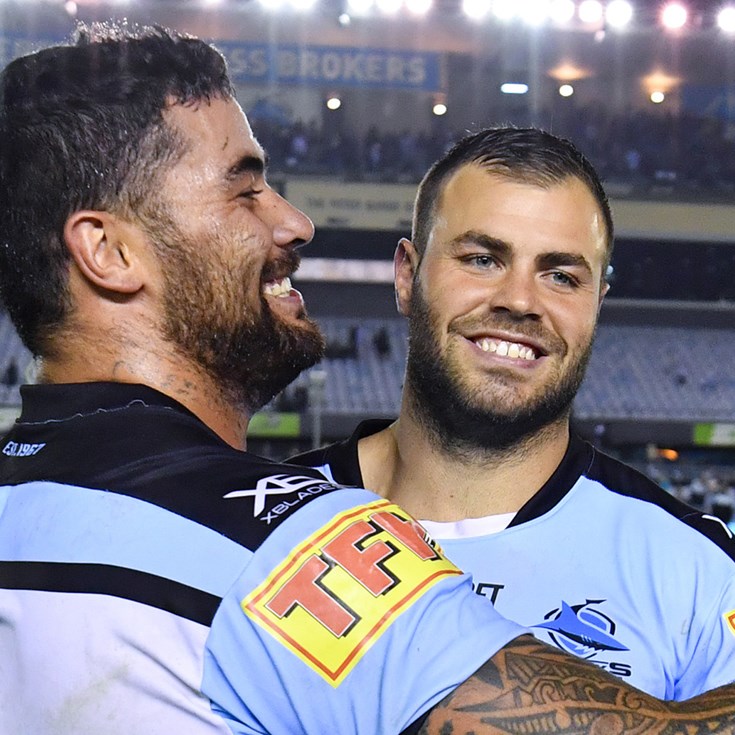 Graham: It's just good to be back

Morris: I've had a bit of everything to deal with