He lost his mentor, his motivation, his NRL spot and his NSW jersey. Now James Roberts has returned home to South Sydney to resurrect his career and he opened up over coffee with NRL.com chief reporter Michael Chammas.

There’s a strut in James Roberts' step again; a swagger that exudes confidence.

The man they call 'Jimmy the Jet', a La Perouse junior who made his NRL debut for the Rabbitohs in 2011, walks around Redfern like he never left.

“Home is where the heart is, bra,” he told NRL.com from a Redfern cafe on Friday morning.

“I feel I belong again. I got to a point at the Broncos when I was getting home and all I could think about was how unhappy I was. I was thinking ‘I shouldn’t feel like this’. I couldn’t concentrate. I couldn’t play good footy. It affected me at home, too. I was anti-social, I just wanted to lay down and do nothing. I didn’t want to get off the lounge. I was off everything.

“But now I have a purpose again. I have a goal. I want to be happy and I want to win a premiership at a club that has always had a special place in my heart.

"To be fair I thought I would finish my career at the Broncos. It’s such a great club with great fans and even better players that I’ve made lifelong friendships with. But it just wasn’t meant to be, now I hope I can finish my career here. Everything just feels right again.”

So when the one person he trusts the most in rugby league, Wayne Bennett, was forced to pack up and leave the Broncos at the end of last season, Roberts lost more than a coach.

“The environment changed up there,” he said.

"In saying that, I think also I changed as well. I felt like I was a bit less motivated because I didn’t know where I stood anymore. You could tell by the way I was playing and the way my attitude was with footy. All I wanted to do was go home and spend time with my family.

“I didn’t feel right. In preseason it just didn’t feel the same anymore. I can’t tell you exactly what it was, but there were different vibes. I just felt like I didn’t fit in.”

The relationship with Anthony Seibold

But for whatever reason, Roberts never felt like he could trust new coach Anthony Seibold.

“The things I have been through growing up has made it very hard for me to trust people,” Roberts said.

“I think over the years me and Wayne have created that bond, me and Paul White (Broncos chief executive) too. I spoke to Paul White when I needed to speak to someone at the club.”

Roberts said he found it hard to speak to Seibold because there was a “barrier” between them, “because I didn’t know him, to be honest”.

“With Wayne, I can tell him how I’m feeling and be straight up with him," he said.

"He has always been brutally honest with me. That’s what I needed. I didn’t have that there anymore.”

When Seibold dropped Roberts to the Intrust Super Cup earlier in the year, it was always going to test the resolve of the 26-year-old and the strength of the player-coach relationship.

Roberts insists he didn’t kick stones, at first. He took Seibold’s feedback on board and tried to win back his spot. But his motivation had taken a hit.

Roberts trains & is set to face the Knights

“Even though it’s hard not to be when you’re in that situation. Seebs didn’t think I was good enough to be in his side, and he had his own reasons.

“But I thought I was better than what I was playing. I’m not going to lie, I did have a few games that weren’t up to the standard I put on myself. I felt like I could offer more to the team than what he thought. He told me a few things.

“I was never told I wasn’t wanted, but I got that vibe. It was just a game of everyone trying to read each other’s minds, which wasn’t working.”

The night out and THAT photo

Publicly, it all began to unravel for Roberts at the Broncos when images surfaced of him being carried out of a party clearly intoxicated.

So what happened that night?

“You wouldn’t believe me if I told you,” Roberts fires back.

The former Blues centre still hasn’t spoken about the night which first raised questions of how he was handling life without Bennett.

“That’s my fault for putting myself in that state,” he said.

“I know better than that, but it’s all a learning curve. There are no excuses. If you’re going to have a drink, you should drink sensibly. To be honest, I shouldn’t drink at all.”

Roberts, who earlier that night had been injured in a match against the Dragons, went out with a couple of his Broncos teammates.

He admits he was in a sorry state, with one of his teammates ringing his partner to let her know they were sending him home.

“They put me in the Uber with a bloke who was hanging off us all night saying he was my cousin. I’d never met the bloke," Roberts said.

"I wasn’t in a good way, which everyone saw in the photo. So I was out of it in the back of the Uber. The boys believed this guy was my cousin and told him to make sure I get home.

“On the way home he’s changed the address from my house to somewhere else and I ended up at some random's house party. I didn’t know anyone. My missus tracked the Uber details on one of the boys’ phones to find me. She rocked up and they carried me out of the party so I can go home. That’s when the photo was taken.”

Returning to the club that sacked him

Roberts has never been one to hide from his troubles. In a revealing interview with NRL.com last year, he spoke openly about the demons that have plagued him and how it almost cost him his life.

Roberts was sacked by the Rabbitohs in 2012 for an off-field incident, but he insists he’s not the same person anymore despite the hiccup earlier in the year.

“I remember walking out of that meeting in tears when they sacked me,” he said.

“I was very young. Very bitter. And I think it hurt me a lot because the club really did mean a lot to me. At that stage I was still in denial at the time about the choices I made and the things I could have avoided.

“I had no guidance back then. Once my uncle Amos [Roberts] moved to England I went off the tracks a bit, roaming the streets and getting up to mischief. They punished me for it, but rightly so.”

Seven years and three clubs later, Roberts finds himself back where it all began. Where he hopes it all will end.

“Wayne was first preference because of the relationship we have,” Roberts said.

“I needed someone I can trust. Wayne is that person for a lot of people. Look, I don’t want to blame anyone. Everyone has choices. It was Seebs’ choice not to pick me. I made some choices as well. You can’t blame people. I just believe I was meant to come back home.

“I was meant to be back at Souths and he’s meant to do what he has to do. I think it all worked out for the better for both of us. You need to be happy with where you’re at to be at your best, and I’m loving life at the moment.” 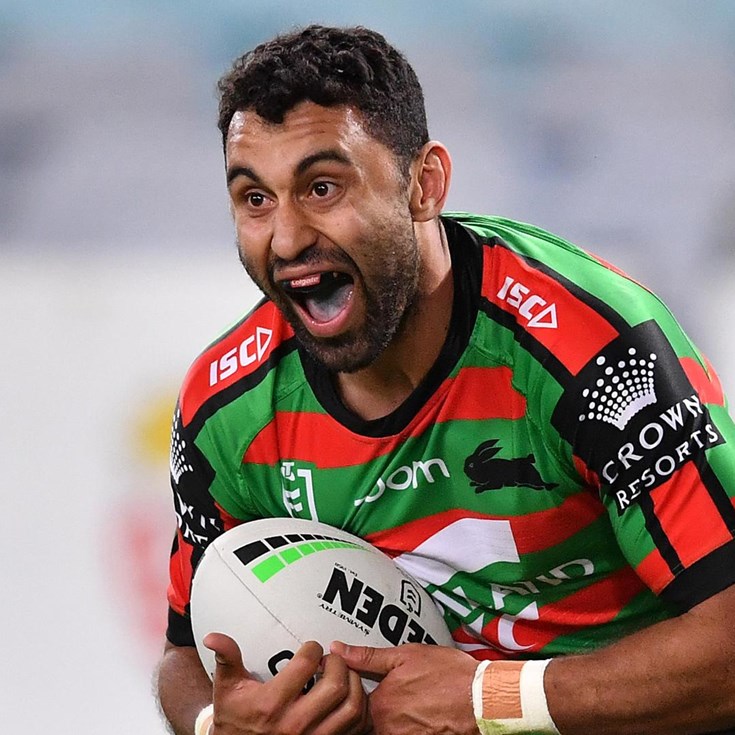 Johnston opens up on his ‘seesaw’ season