Anyone who witnessed it will have warm and fuzzy memories of Mate Ma'a Tonga charging back from 16-2 down at half-time to upset the Kiwis 28-22 at the 2017 World Cup.

It was the first time in rugby league Test match history that a tier two nation had beaten a tier one nation.

The Kiwis will be out for revenge on Saturday at Mt Smart Stadium.

One of the big talking points was Benji Marshall earning his first national squad selection in seven years.

It's no real surprise given Benji's good form in 2019 and he'll form a potent halves combination with Shaun Johnson.

New Zealand: Coach Michael Maguire has opted to go with a Marshall-Johnson halves combination, with Kieran Foran named among the reserves. Jared Waerea-Hargreaves has served his suspension for that late hit on Kalyn Ponga in round 11 and will take his place in the front row with Jesse Bromwich. Such is the strength of the Kiwi pack that Nelson Asofa-Solomona will come from the bench. Jahrome Hughes and Briton Nikora will make their Test debuts.

Tonga: Versatile Cowboy John Asiata will play his first Test for Tonga after previously representing Samoa. He will team up in the halves with Leeds playmaker Tui Lolohea. Andrew Fifita's suspension means a new prop will need to be found and Manly's Addin Fonua-Blake, who was named on the bench, is favoured to come into the starting side.

This game presents Tongan hooker Siliva Havili with an ideal opportunity to spearhead what might be the most powerful pack in the world. If Havili gets his big forwards charging into the Kiwis from start to finish, he's capable of a man of the match-type performance. Havili will be relishing his head-to-head clash with rugged Kiwis and Storm hooker Brandon Smith.

For New Zealand to win

The Kiwis boast more skill and creativity among their little men and Michael Maguire will be looking at ways to make the most of it. They need to keep moving Tonga's big men Fifita, Taukeiaho and Fonua-Blake around and test their mobility. They might have the muscle and resolve to cope with a power game, but that will play straight into the Tongans' hands. The wise thing to do would be to play an up-tempo, crowd-pleasing game and rely on speed and talent.

For Tonga to win

The Tongans are loaded with size and power up front but they're a bit thin in the playmaking department. Coach Kristian Woolf will have to rely heavily on a makeshift halves combination of Tuimoala Lolohea (Leeds Rhinos), who was the only overseas player named in the squad, and Cowboys jack-of-all-trades John Asiata.

David Fusitu'a will never forget his five-star display when Tonga beat New Zealand in the 2017 World Cup. The Warriors winger claimed a hat-trick of tries on that incredible night, including the final try of the game to seal victory. Fusitu'a should feel right at home on the Mount Smart Stadium turf on Saturday.

Whatever else you do this weekend, don't miss the pre-game stand-off when the teams perform their traditional war cries. The Tongans will no doubt provide a stirring presentation of the Sipi Tau, while the Kiwis will let the Tongans know they are in enemy territory with a typically passionate rendition of the world-famous Haka. It's sure to be spine-tingling stuff. 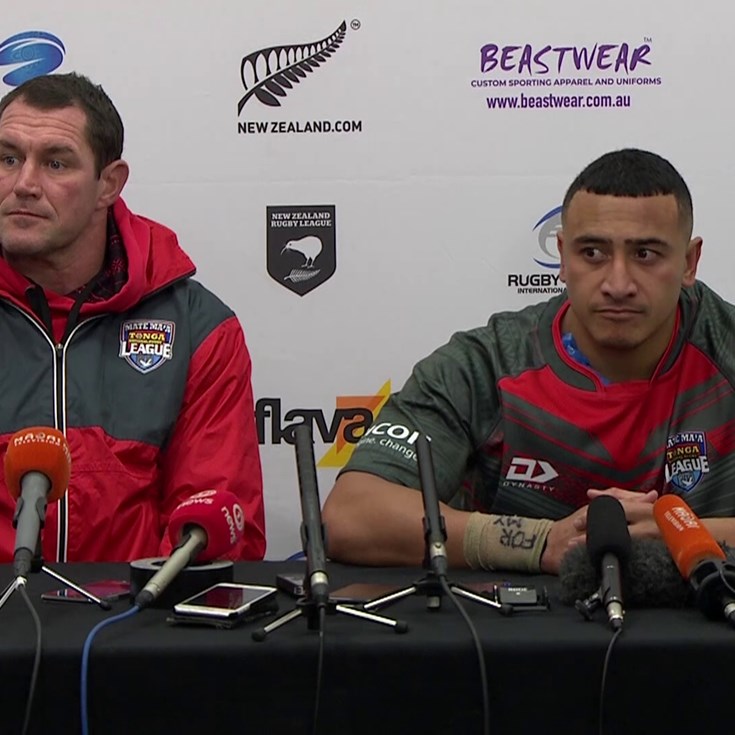 Hughes floats across field to score

How well do the Kiwis know Benji Marshall