NSW Origin heroes Tom and Jake Trbojevic will have no trouble re-focusing their attention on the Sea Eagles for Saturday's match against the Titans, according to Manly teammates.

Tom's hat-trick for the Blues – the first since Matt King in 2005 – and Jake's man of the match performance were two key ingredients in NSW's 38-6 thumping of Queensland.

"Those two Blues boys would be on a high and they deserve to be," second rower Curtis Sironen told NRL.com.

"But it was the same after Game One when Chez [Daly Cherry-Evans] came in with a big smile on his face. It's part of Origin that you have teammates on different sides.

"Jake and Tom – and Chez too – are the last individuals who would come back with any ego, or carry-on, at all. That's why they are the perfect sort of player.

"They do a good job in rep teams but then put all that on the back-burner when they come back to their clubs.

"I know Chez was on the other end on Sunday night but he's one of the most mentally tough people I know. He's a competitor and he's our captain for a reason. He won't let emotion over-ride him."

Manly's three Origin players did not train on Tuesday but have been named in Des Hasler's team to face the Titans at Cbus Stadium on Saturday.

All three have bumps and bruises but they have five days before they play again.

"They're all super professionals," Sironen said.

"We're expecting them to play. Chez's ankle might be the only concern but he would have taken care of it straight after the game.

"They've all shown they can back up after less time than they've got this week. We need them."

Cherry-Evans was not part of the 36-18 round 11 loss to the Titans at Lottoland, as he nursed a syndesmosis injury in his right ankle.

Winger Reuben Garrick remembers that match well, even if the result still stings a bit.

"I think we were favourites for that game for the first time. So I'm really keen to get out there and face them again and put in a better performance because of what happened," Garrick said.

"[Titans] Dale Copley was on the other wing that day and he scored a few tries [three] so I was pretty filthy with myself that game. I'm so keen to put my best foot forward on Saturday.

"It's a massive game for the club and there's extra motivation for us this time."

Manly is sixth on the Telstra Premiership ladder, just one win outside the top four.

The Sea Eagles have the bye in round 16 so a win is effectively worth four competition points.

Garrick also has faith in the Trbojevics being back down to earth well before this weekend's game.

"And Tom is a beaut bloke too. It's a real credit to their family on how good those two are.

"I'm sure there will be a bit of banter between them and Chez, because most of our side are New South Welshmen. But it won't distract us from what we need to do this weekend." 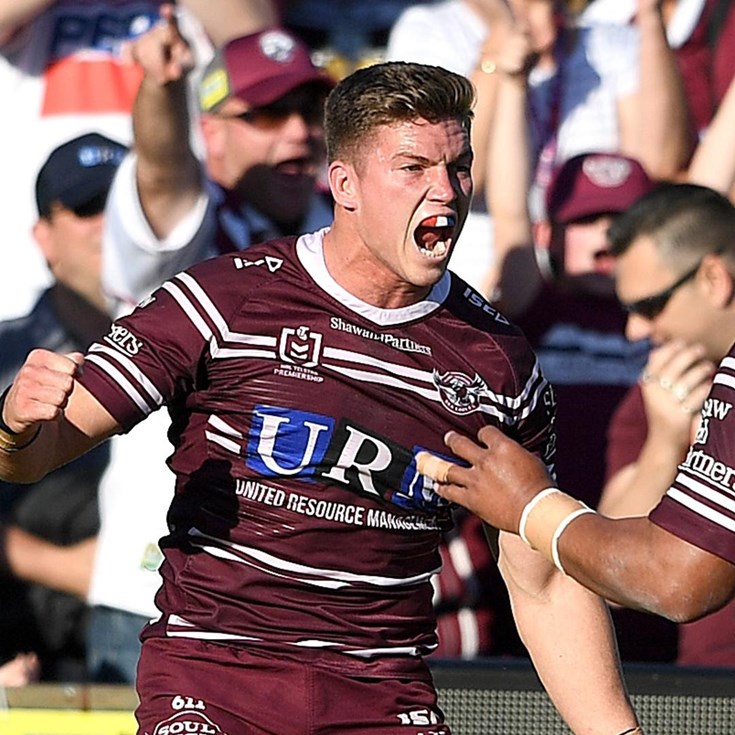 Shoulder healing well but Jake won't make it back for opener