The heated stoush between Maroons captain Wally Lewis and NSW firebrand Mark Geyer in game two of the 1991 series at the Sydney Football Stadium is one of State of Origin's most famous confrontations.

In 2014 the referee in the middle of it all, David Manson, told Rugby League Week magazine how the Maroons targeted Geyer behind the scenes, before and after the game.

Legendary Queensland referee David Manson has revealed for the first time how the Maroons targeted Mark Geyer before and after his last State of Origin game in 1991.

The match, the second of the series at the SFS, is famous for the stand-up stoush just before half-time between Geyer and Queensland captain Wally Lewis.

Manson has told RLW of a fascinating chat he had about Geyer with former QRL boss Ross Livermore before the game, and how he passed a kidney stone the day after it.

He also sheds light on how he later provided Livermore with a signed affidavit concerning Geyer's conduct that did not please the Queenslanders.

Before the game Manson went to see Livermore to get his $704 match fee, as was the practice at the time. He took then in-goal touch judge Peter Betros with him.

"As Ross was counting the money out he said, 'By the way, we are going to have the same game plan we did in the last game'," Manson recalls.

"He said Queensland targeted Geyer in the first game and he went and hid in the centres, so NSW only had five forwards.

"He indicated the plan in the second one was for them to have five forwards again.

"I said, 'God help you if you wake him up. Don't expect me to rescue you. Ross, you are talking to the wrong fella. I am going out there to referee a game of football. I don't see Queensland or NSW. I just see decisions, and I make them the way I see it'.

Manson, who was Queensland-based at the time, had a high regard for Livermore and says it was just some gamesmanship on his behalf.

The irony was that Geyer, who had been given a licence by the Blues hierarchy to wreak havoc, went ballistic in the match and NSW levelled the series with a 14-12 win.

"Mark was a bit of a hot head, but also a terrific ball-playing forward," Manson says.

"There had never been a player sent off in State of Origin, so he was told to stand up and be counted."

After the game, Livermore asked Manson what would be in his match report, but the ref had not been required to fill them out in the past and wasn't about to start now.

"I went to the men's toilet and grabbed a roll of toilet paper. I said to Ross, 'Do you want me to fill it out on this, because it is a heap of shit you are talking'," Manson chuckled.

"The next day I had a kidney stone attack and spent the day in hospital."

Manson was pumped full of morphine, drank plenty of water and passed the stone ... and then checked himself out.

But Livermore later tracked him down at home with an affidavit to fill out regarding Geyer's conduct in three separate incidents.

"In the second half Mark goes to make a shoulder charge on Paul Hauff but he couldn't complete it… so he waved his arm while trying to reach him and lifted his elbow.

"That is the elbow he got the three weeks [suspension] for, but he made no contact with Paul Hauff whatsoever."

Manson filled out the affidavit as he saw it. Geyer served three weeks, and never played Origin again.

Two weeks later Lewis played the final Origin game of the series, and his career, and went out a winner. 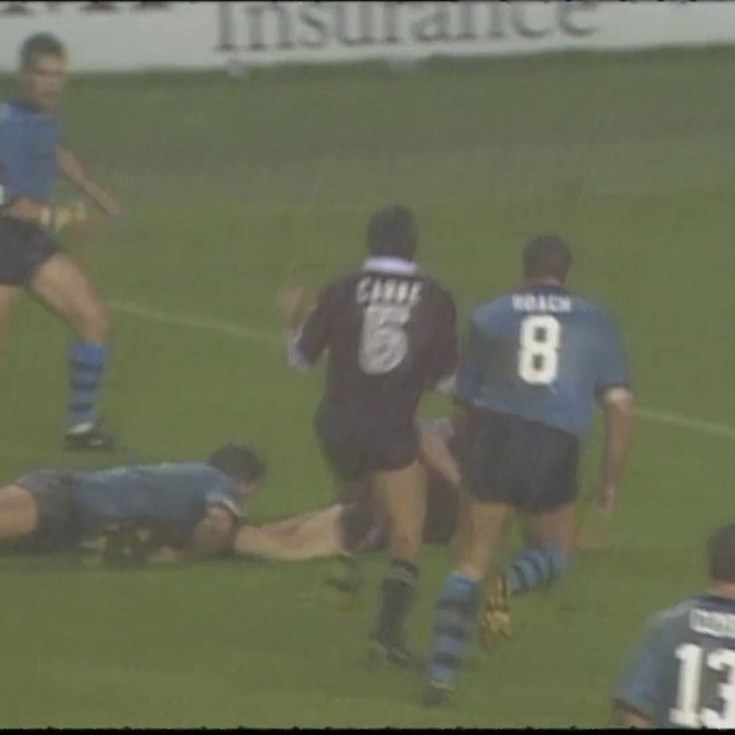