The Canberra Raiders have inducted three more legends into their Hall of Fame, at Friday nights inaugural Hall of Fame Dinner at the National Convention Centre Canberra.

First Coach of the club Don Furner, first Captain of the club David Grant and first 300 game player Jason Croker are the latest round of inductees, joining the 14 inductees who were announced at this year’s season launch.

The evening also doubled as a celebration of the 3oth anniversary of the 1989 Grand Final, where past legends of the club were on hand to remember the clubs first premiership.

Don Furner (Snr) is a life member of the Canberra Raiders, an individual who has had a lifetime association with rugby league that stretches far and wide. Born in Condobolin New South Wales, raised around Balmain in Sydney, Don played for Australia from Toowoomba and also played (and mostly coached) in Mackay, Roma, Tumbarumba, Junee and Queanbeyan.

Don came to the Canberra region from Junee in 1965 and after successfully coaching the Queanbeyan Blues for 13 seasons, became Canberra’s inaugural coach in 1982.

Largely responsible for scouting and assembling the Raiders initial squad to participate in the then NSWRL competition, Don’s ability to draft the best talent from around the local area and further afield was second to none. He was pivotal in laying a solid foundation for the Green Machine during its formative years.

Widely recognised for his ability to unite a team, under his guidance the Raiders improved steadily, reaching a playoff for 5th in its third season (1984) and in 1987 became the first non-Sydney team to make the finals and feature in a grand final.

That same year Don was awarded both the Dally M Coach of the Year and the Order of Australia in recognition of his services to rugby league.

After leaving the Raiders at the end of the 1987 season, Don stayed involved in the game through coaching at representative level and serving as a talent scout for the Canberra Raiders.

David ‘Nana’ Grant was a pioneer at the Club, the inaugural captain of the Raiders first team in the Sydney competition in 1982.

Originally from Dubbo New South Wales, the cousin of Rugby League ‘immortal’ Arthur Beetson, came to Sydney from Forbes where he made his debut for South Sydney Rabbitohs in 1976. The following year he moved to play for the Eastern Suburbs Roosters for one season, before moving to spend four years with the Balmain Tigers.

Grant toured New Zealand with a Combined Sydney side that year but after a successful period with Balmain moved to the newly promoted Canberra club in 1982.

Foundation coach Don Furner had no hesitation in making Grant, a proud Indigenous man, the inaugural Club skipper in 1982 given his previous experience in the Sydney Premiership.

Nana’s leadership style was always characterised by looking after his team mates, and in return he was highly respected by his team mates and Club personnel.

A tireless and talented prop forward, who had an imposing physique, Grant was the team enforcer who always led from the front.

During one memorable match for the Raiders, Grant had a head collision with Parramatta forward Chris Phelan, and after receiving 10 stitches at half time he was back on the field in the second half to lead the team to victory.

Post-match it has been reported that nearly 40 stitches in total were applied to his injury, which highlights the persistence and never give up attitude of the man that continues to resonate at the club today.

Jason ‘Toots’ Croker, at the time of Raiders Hall of Fame induction, is the only player to have played in more than300 first grade games for the Club.

Such accomplishment highlights his commitment, versatility and toughness during a decorated 16-year career.

Born in Crookwell NSW, Jason was drafted into the Canberra Raiders Junior Representative Program in 1988 at the age of 15, and within three seasons had graduated to first grade representation.

At first grade level, Toots was a prolific try scorer, particularly in his early years when he played in the Raiders backline.

By the end of his Club career he held the Raiders record for most tries scored, 120 in total, one of which came in the 1994 Grand Final victory over the Bulldogs where he played in the second row.

As his playing career progressed, Jason become known as a talented utility player which resulted in higher representative honours for NSW Country, NSW and ultimately Australia.

Jason collected plenty of Club awards also during his stellar career including Player of the Year, Player’s Player, Most Consistent Player and Rookie of the Year.

Croker’s commitment and toughness were best highlighted during the 2001 season when he put in one of the bravest performances in Green Machine’s history.

He played almost the entire second half of Canberra’s 32-22 win over the Roosters with a ruptured ACL in one leg and torn ankle ligaments in the other. Canberra trailed the Roosters 22-10 at half time and had lost four players by the opening stages of the second stanza. 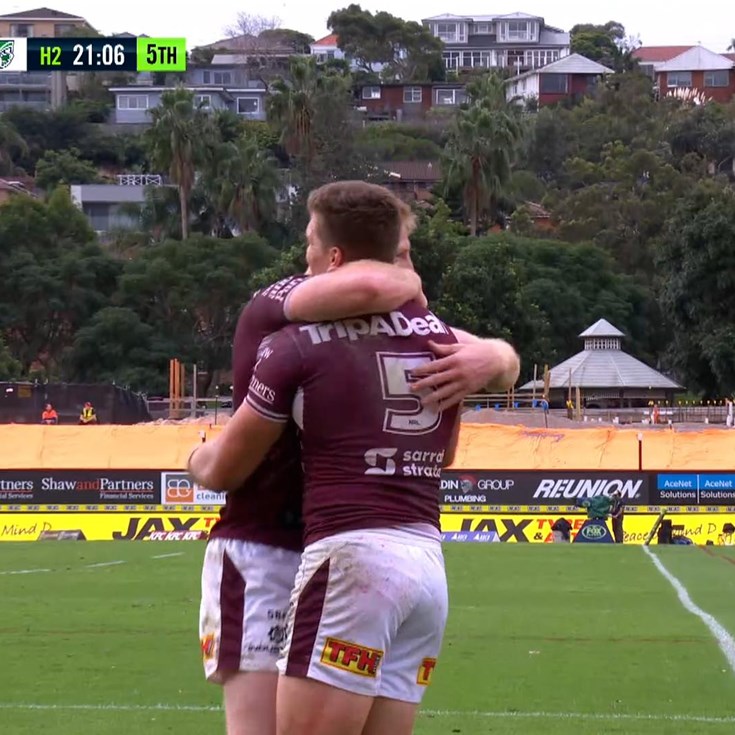 Saab has a hat-trick

Saab try has Manly back in front

Harper breaks through on the right