Robbie Farah and Benji Marshall have wound back the clock in Newcastle to score a try each and put the Knights' finals aspirations in jeopardy with a thrilling 28-26 victory at McDonald Jones Stadium on Friday night.

Farah, who was celebrating his 300th NRL appearance, scored a vintage try in the 53rd minute after Marshall had turned back the clock with some fancy footwork to score just before half-time.

It was the first time the veteran pair each scored in the same game since the 2011 finals series, while Farah's effort was the seventh occasion a player has scored a try in their 300th match.

But the home side were soon chasing their tails when they conceded three tries in 18 minutes.

Nathan Brown's night got worse in the second half with the sides going try-for-try to hurt the Knights' chances of wrestling back the momentum, while a Kalyn Ponga conversion attempt that would have levelled the scores in the 70th minute sailed wide.

Ponga finished the game in the sin bin for foul play on Michael Chee Kam, who was knocked out after colliding with the Knights fullback.

It was a case of master and the apprentice to highlight the opening half with Marshall and Ponga producing scintillating individual efforts among the five tries scored.

Wests Tigers winger Paul Momirovski had an opening to forget when he spilt two balls that led to tries to Ponga and Jesse Ramien.

Benji rolls back the years

A simple put-down from Ramien in the third minute was followed up by a piece of Ponga magic when he bamboozled four Tigers defenders close to the line.

But Michael Maguire's men hit back with a treble of tries of their own.

A short ball from Marshall to Luke Garner sent Corey Thompson over from a set play to narrow the lead, before Thompson backed up a Luke Brooks bust on the left edge to grab a double.

Newcastle should have extended their lead in the 30th minute with Tim Glasby denied a near certain four-pointer when David Nofoaluma jolted the ball free in a try-saving effort.

A sloppy high shot from Connor Watson enabled the visitors one final chance before the break and Marshall accepted the invitation to leave James Gavet and Herman Ese'ese in his wake.

Coach Brown would have barely got back to his seat before Watson went down the blind side to find Hymel Hunt for his eighth try of the season.

Farah's burrowing effort pushed the Tigers out by eight but such was the see-sawing contest, the Knights didn't take long to hit back through Tautau Moga.

A knock-on call against Mitchell Pearce left the Knights fuming and their mood worsened when Momirovski darted over in the corner soon after.

Newcastle responded as the points continued to flow with Watson charging down a Brooks kick before Ramien got on the outside to send Shaun Kenny-Dowall over.

Ponga had the chance to level the scores  but hooked the conversion right.

The Tigers controlled the game in the final two minutes after Chee Kam’s departure to leave the Hunter with a vital two points. 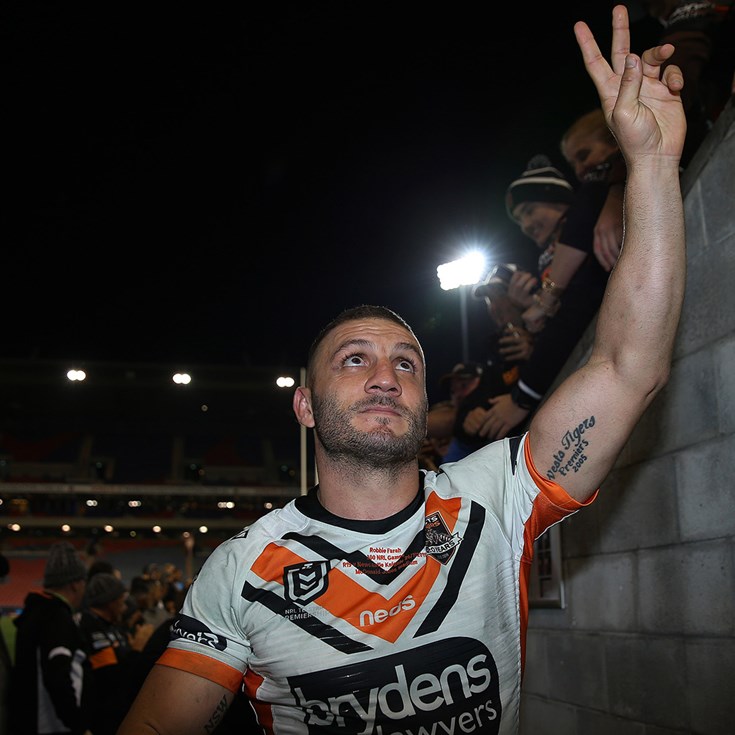 Milestone man Farah gets a try

A look back at the best of Robbie Farah