The Warriors' major mid-season recruit Kodi Nikorima is set to be relegated to the bench if he overcomes an ankle injury in time for Sunday's clash against the Roosters, with rookie Chanel Harris-Tavita having surpassed him as first-choice five-eighth.

Nikorima injured his ankle in round 20 and missed last week's win over Manly, with Harris-Tavita grabbing his opportunity and setting up two tries in the upset victory.

With Nikorima named in the extended reserves this week, coach Stephen Kearney confirmed the former Bronco will be included on the bench if fit.

"I will look at [Kodi] to come off the bench in a dummy-half, possible half role, but we will see how we go over the next couple of days," Kearney said.

"I would anticipate he will be coming on at dummy half, but we will see how the game plays out.

"He wasn't too bad today. We will just see how he pulls up and look at him again tomorrow."

Nikorima took part in the club's field session on Wednesday and according to hooker Jazz Tevaga has taken the news of the demotion in his stride.

"I think Kodi knew. Chanel played out of his skin, and why would you change that formula?" Tevaga told NRL.com.

"Chanel did a fantastic job not only against the Raiders, but last week against the Sea Eagles.

"Kodi will be all good, he'll be back in there again shortly."

The Warriors need to beat the second-placed Roosters at the Sydney Cricket Ground if they are to keep their slim play-off hopes alive.

It's set to be a special match for rookie Warrior Adam Pompey, who played both Under 20s and reserve grade football at the Roosters before moving across to the Warriors at the start of 2019.

"I spent a bit of time training with the boys there but facing them on the pitch will be a big one," Pompey told NRL.com.

"I played with Sam [Verrills] last year, Victor Radley and some other boys too, and it will be nice to see them again.

"I messaged Sitili Tupouniua and told them I can't wait to see them."

The 21-year-old winger also said he would relish the opportunity to come up against Daniel Tupou and Latrell Mitchell on his side of the field.

"It is a big challenge, I'll have Daniel and Latrell and they are the benchmark in the NRL," Pompey said.

"I trained against Daniel and he taught me a few things, so hopefully I can use some of that this weekend.

"He's a strong runner who really gets up on those high balls."

Meanwhile, Tevaga urged fans to get behind the fundraiser he has organised for luckless team-mate Nathaniel Roache, whose season was ended by an ACL injury in July.

It is the third season-ending injury Roache has suffered in as many years, coming after he tore his Achilles in 2017 and missed all of last year due to back surgery.

"We wanted to get some money going and start an auction so he can get away and take his mind off things and clear his head. I just think he needs to get away," Tevaga said.

"The kid can't catch a break, he's one of my closest mates and to see him go down is heartbreaking.

"Reality is he has only got one more year [under contract], he will come back strong, I know he will, but if something like that happens again it's not looking good for him." 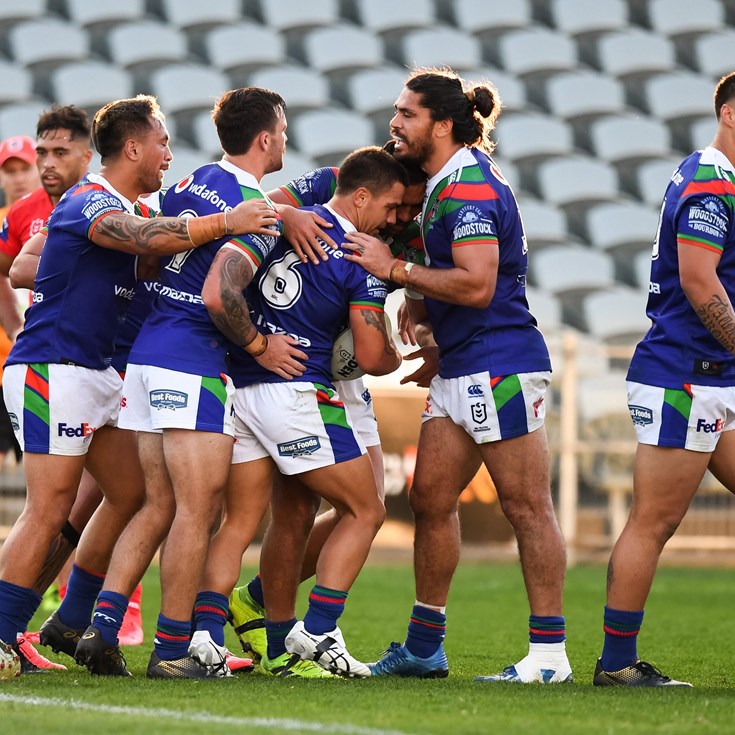 The Warriors' journey through adversity