Penrith rookie Brian To'o proudly proclaims to be "the weird one" at the club.

Wearing a fluffy panda hat as the squad ate lunch at the Panthers Academy on Wednesday ("to keep me warm," To'o shrugs) it's clear the 20-year-old with the cheeky grin and infectious energy is a little different.

It takes many first-year players a season or two to feel totally comfortable in an NRL environment. But even with veterans like James Maloney and James Tamou in Penrith's ranks, To'o's exuberance is shining through just 11 matches into his career.

"It's just me naturally. That's me around the house. I'm the annoying one in my family," To'o tells NRL.com. "Anywhere I go I just take it with me."

To'o's ebullient dressing room dancing before matches and either side of training sessions has gone viral recently, his kung fu moves lighting up social media in particular.

We suspect this is not what @troywhittaker98 expected when he turned up to interview Brian To'o... 🐻🤷🏽‍♂️#pantherpride 🐾 pic.twitter.com/sWUyydDtm3

The Penrith junior does whatever he can to lift the team's morale and finds getting his groove on the perfect way.

"Building energy around the change rooms, that's what I do," he says. "On that day [of the kung fu dancing] I was sort of pumped. I was really keen to get out there with the boys.

"There were a few of the boys in the change rooms so I tried to get them pumped."

To'o differs from the norm on the field, too. While some would be intimidated, he's welcoming the battle against powerful Queensland Origin winger Corey Oates in Friday's crunch game with Brisbane.

Don't mistake To'o's confidence for arrogance - the athletic flyer is polite, grateful and still can't believe he's in the NRL.

"Right now, it hasn't hit me yet. Playing first grade, it's just crazy," he says.

You wouldn't know it by his performances but To'o admits to being occasionally starstruck facing off against his heroes.

"Some of the big names like Daniel Tupou, obviously Corey Oates this week. It's a real honour to play against them," he says.

Too flips his way to a double

The Mt Druitt product, who has scored six NRL tries, doesn't want to look too far ahead but featuring in the playoffs would cap an incredible entrance to the big league.

"It'll just make it even better. Obviously this year's my first year of first grade. As I said, we'll take it week by week and if we get into the finals that's good," he says.

The Broncos clash at Suncorp Stadium lands in Women in League Round. For To'o, who grew up with three brothers and three sisters, it's a chance to thank his devoted mother.

"Mum's been there since the day I was born and she's still supporting me. Mum plays a massive role - both my parents do, they've played a massive role in my journey," he says.

"They give me everything. They help me with my prep, making sure I have my stuff for training, making sure my clothes are set and ready. Every time I come home there's food on the table.

"Mum's a massive influence on my life." 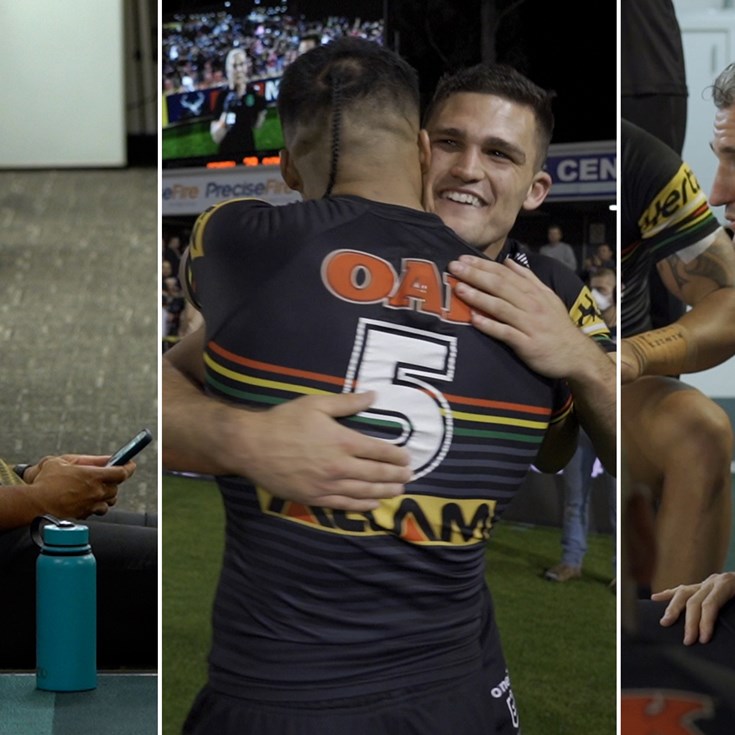