In the wonderful theatre of rugby league Wayne Bennett is the master puppeteer.

He is also set designer, lighting manager, production co-ordinator and director on many occasions.

He gently pulls at the strings to make his players, club administrators, the game's officials, even other coaches move in a slightly different direction, or take a shift in attitude.

He is full of surprises in that respect, in terms of what issues he seeks to promote or change. He also has the right to do it as he's won seven premierships.

Bennett fiercely defends his players – think back to when he shifted Darren Lockyer from fullback to five-eighth – and has done it all the way through his career whether at the Broncos, Dragons, Knights or now at the Rabbitohs.

He normally extends that courtesy to his staff. But in the spat between Bennett's assistant coach Jason Demetriou and Broncos head coach Anthony Seibold, he washed his hands of it on Thursday, brushing off suggestions he was behind it all.

"You go talk to Jason. He's the guy who made the statements... you go talk to him," Bennett said. "If I did care about it I'd say something to him but I haven't said anything to him."

"Go and ask Jason. I'm not going to stand up here and be interviewed about Jason alright. Jason's a big boy – you know where he is – he's obviously got something to say. Go and ask him. It's his problem not mine."

And if it's not Jason's problem, it's often the media's.

"Well I haven't been a part of it [banter]," he said when asked why the barbs were thicker for this round 23 game than they were in round eight, when the clubs first met under their new coaches.

"…. [maybe] because you get a kick out of it so you want to make it a headline.

"Well you love that. It doesn't interest me but I know you'll enjoy it. So that's good – I'm pleased for you. You write the stories, you make up your own mind."

The players were unaffected, Bennett said.

"Well no one's talked about it; there's been no discussions about it. Most of them probably haven't seen it.

"I don't care what somebody else says. It's not worried me in the past and it's not going to worry me today. I'm not here to justify what I do and what I don't do. "

But since Bennett has previously stated himself that South Sydney's form has been sporadic, it's fine to dissect those comments.

"We need to be playing well and we're not playing well. We've had a lot of injuries. At the first part of the year we kept picking the same side every week and that does make a difference.

"We've had a lot of quality players missing too, so that's part of it. We lost momentum through the Origin series and just haven't been able to get it back. We need to complete better and compete better.

"This week is just another game of football. If you don't want to understand that then that's your problem. I'm not making it up. I've hardly thought about who we're playing all week.

"I'm just trying to get our blokes right and get back to the footy we can play."

On that front, Sam Burgess is out with his quad strain – to be replaced by Junior Tatola - and although fullback Adam Doueihi stepped out of Thursday's Redfern Oval session, Bennett said he would play.

"He'll be playing. He's just got an injury at the moment that we can't train him every day. He'll be fine for tomorrow night."

Of course the Broncos are not the only ones at odds with Bennett.

The man who replaced him at the Knights, Nathan Brown, resigned this week with another small parting shot at Bennett's recruitment plans saying his job was to come in and fix a badly broken Knights roster because "some coaches are selfish".

"I've not heard those comments. I'm not up to date with that," Bennett said, before being told what they were.

So with the heat sufficiently turned up in the kitchen, Bennett changes tack when asked about returning to Suncorp. He has coached eight times there against the Broncos but only won twice.

"I'm going back to Queensland mate, it's the Sunshine State. I love being there," he said, before being asked if he'd line up a barbecue at chief executive Paul White's house.

"I'm thinking about it actually... a barbecue is on my mind. I'll just see how we go tomorrow and we might have a barbie. It's a good idea." 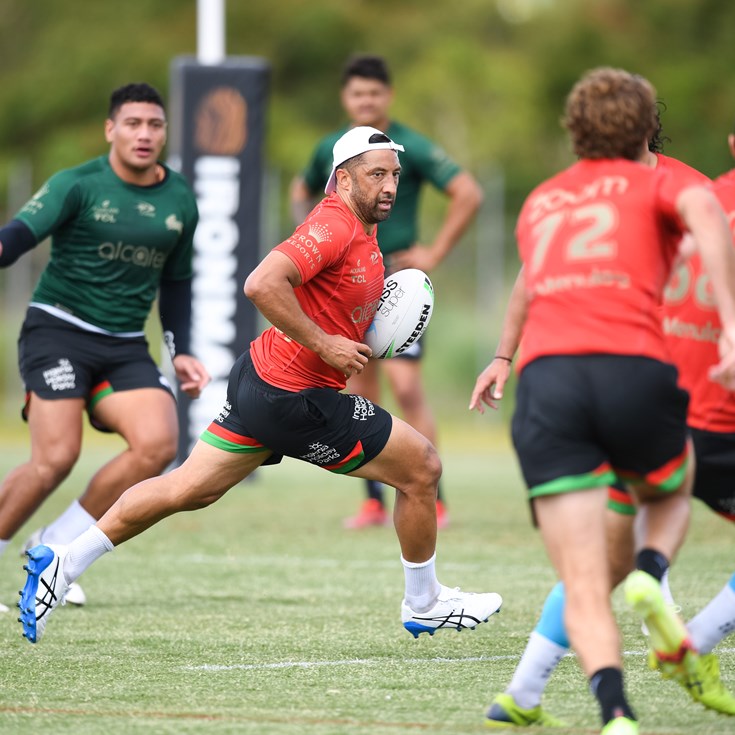