Stuart and Gallen have remained close since the Raiders leader plied his trade with the Sharks for three years from 2007.

However, there won’t be any love lost between the pair on Sunday with a win crucial for both sides with the Telstra Premiership finals looming large.

"It's a credit to Paul and what he's achieved at the club and it's not new news I'm good mates with Gal," Stuart said.

"He's had a marvelous career, I just hope he doesn't win this one.

"He knows I don't like talking to the opposition before a game, so he wouldn't be expecting me to give him a call, but he knows I'm always in his corner."

As much as the occasion at PointsBet Stadium will provide the Raiders with another taste of semi-finals footy, Stuart is looking for more from his side.

Close losses to the Roosters and Sea Eagles in the past month have taken some of the shine off Canberra's excellent come-from-behind win over Melbourne two weeks ago.

However, Stuart said the side knows how they need to improve from their ill-disciplined loss to Manly.

"It's certainly given us a semi-final intensity practice, that's something I think we've found in those last three games," Stuart said of his side's recent run.

"From the crowds to the speed of the football, the intensity that was generated through those games and then there's last week which was a bit stop-start and we lost a little bit of patience.

"It's not about shutting Paul down, I think we're playing okay football, there's areas of our game that need to be better from last week and we've got to work on those.

"I want to come out of this game happy with how we're playing, it's important these next two weeks we finish the season off in really good form and playing well.

"Obviously it's important to win but we’ve got to be playing good football as well."

Following the last-start loss to Manly, Stuart said some of his players strayed from the game plan but he didn’t expect to happen against Cronulla.

"We went a little bit off track last week and there were times we didn’t have a lot of composure which obviously in big games is very important.

Papalii steamrolls the Raiders to victory

"That's how we won the game against the Melbourne Storm, we had some real composure in the final moments.

"But it's good the players see that too because it's the first step in improving it."

One of the players singled out by Stuart for staying the course this season is Elliott Whitehead.

While Josh Hodgson and John Bateman have drawn most of the headlines for the Raiders' English contingent this season, Whitehead's bruising defence has been critical for Canberra's left edge.

"I think Elliott's been our most consistent player all season, but he doesn’t fly under (the radar) with me, he certainly doesn't let me have that train of thought," Stuart joked.

"He really works hard on the field and he covers his mates' backs, the way he pushes up off the football, Elliott's a very intelligent footy player and he knows his game very well." 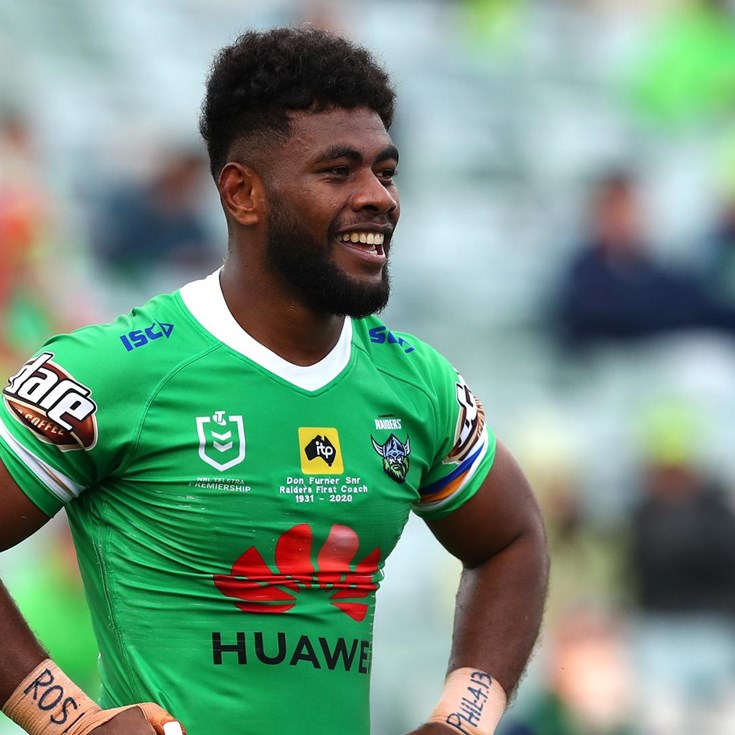