The NRL Fantasy season is at an end, and to celebrate one of the highest-scoring seasons in recent memory here are my unofficial awards for the 2019 season.

First up, it's time to congratulate this year's prizewinners. The top overall prize of $10,000 plus a VIP trip for two to the 2019 International Nines in Sydney goes to Angus Moody for his team Newcastle Eels, which finished strongly in the final rounds to take top spot as others slipped up due to a lack of trades. Angus pipped Matthew Bone ($4000) to the honour by just 54 points, with Darren Schischka ($3000), Richard R ($2000) and Justin Robertson ($1000) rounding out the top five.

Lesa Piggin took out the $500 prize for the highest-value squad at a whopping $14.95m, while Dylan Catalan earned two tickets to the NRL Grand Final with the early league creator prize, and the club champions for each NRL team are below.

Note: There are still weekly cash prize winners that have been contacted via email, but not responded to claim their prize. If you think you might be one of these check out the prizes page and then your NRL Account-registered email for comms from fantasyandtipping@nrl.com.au.

Now onto the best and worst of the 2019 NRL Fantasy season...

Player of the Year: Payne Haas

It's hard to believe now but at the start of the year Haas was no sure thing as a Fantasy buy, a teenage prop stuck on the sidelines due to a club suspension with the Broncos already fielding a collection of super-talented young forwards. But a point-a-minute 65 in round five quickly changed that, with the towering big man with the endless motor going on to score 67.8 points a game – including an even 100 against Penrith and not a single score below 50. Along the way his price rose by a staggering $699,000 – about $300,000 more than the next best cash cow of the year Ryan Papenhuyzen. He could easily become the dominant Fantasy player for another decade or more.

Performance of the Year: Nathan Cleary

What do you get when you combine four tries, nine goals, nine tackle busts, three line breaks, a try assist and a few kick metres to boot? You get 120 Fantasy points, a sublime return that Nathan Cleary saved until the very last game of the regular season. The Panthers halfback fell just short of his own record for greatest NRL Fantasy score of all time (126) but it was still comfortably the best individual score of 2019.

Cleary does it all himself again

John Bateman came to the NRL with a strong reputation from the Super League, but he presented a dilemma for Fantasy coaches at the start of the season. Was he guaranteed big minutes in a strong Canberra pack? Could he produce the same kind of numbers in Australia? Was he worth the $593k price tag?

The answers to those questions turned out to be yes, yes, yes, with Bateman kicking off the season with 60 points and smashing out 89 a couple of weeks later against Newcastle, averaging 60 for the season and jumping more than $220k in value along the way. His availability as a centre/second-rower was just icing on the cake.

The Knights superstar takes out this award again, losing the bargain price tag he had last year but gaining dual position status after being tried out in the halves at the start of the season. That experiment didn't work but did make him a cheaper option when he inevitably returned to the fullback role and immediately starting piling on big scores during the Knights' early-season winning spree. He ended the season as the only player in the majority of Fantasy teams, even if his late-season form left a little to be desired.

Perhaps a controversial selection considering his dramatic fade in the final two rounds, when he scored just 26 both weeks, but Mitch Moses made a dramatic leap from mediocre buy to genuine gun this season. Moses had never averaged even 40 Fantasy points per game in a season before 2019. His best was a 39-point season in his final year as a Tiger in 2016, followed by his 37 ppg campaign last season. But, following Corey Norman's exit to the Dragons, the Eels became Moses's team this year and he's thrived – leading the competition for try assists, kicks and kick metres, while kicking 86 goals. Going into the final round of the season he was one of only two halves to have scored 55 points or better, along with Daly Cherry-Evans.

Flop of the Year: Rhyse Martin

A rapid demise for one of 2018's most popular Fantasy buys, a genuine bargain scorer who for whatever reason lost his 80-minute role in the Bulldogs pack and saw his scores (and price tag) plummet. By round 14 he had dropped in value by $407,000 and departed the NRL for Super League club Leeds Rhinos.

Traditionally a mid-40s scorer, Klemmer's switch from Canterbury to Newcastle coincided with easily his best Fantasy season. The hulking prop could be relied on for a score between 50 and 65 pretty much every week, with only three sub-50 scores in 21 matches. He finished second best among all front-rowers, behind Haas.

Fifita scores from absolutely nothing

In the first half of the season, Brisbane teenager Fifita scored 33 points a game, with no scores above 50 and six in the 20s. But in the second half of the campaign Fifita was a monster, scoring 61 points a game including a run home that featured scores of 72, 100, 90 and 65. No forward made more tackle breaks than Fifita this season and if he can retain the 80-minute role next year, he looms as a cut-price keeper.

Star in the Making: Ryan Papenhuyzen

Former Tiger Papenhuyzen started the year as Melbourne's third-choice fullback, behind Scott Drinkwater and Jahrome Hughes, and spent the early part of the season as a very low-minute bench utility. Then in round nine he exploded, scoring a stupendous 69 points in just 32 minutes against Parramatta in Magic Round. That scoring didn't stop – Papenhuyzen piled on 726 points in 757 minutes this season, an amazing conversion rate for a back, scoring close to 70 points per game when starting in the No.1 jersey. He was a great late-season buy and could still be a steal as a keeper next year.

It used to be so simple. Pick and stick with Corey Parker. Later, pick and stick with Cameron Smith. That was the case until last year, when Damien Cook toppled the King of Fantasy to become the game's number one player. This year there was fierce competition for that title, with Cook, Smith, Haas, Jason Taumalolo, Cameron McInnes, John Bateman and James Tedesco all scoring around 60 points a game or better. It added a real wildcard element to captaincy decisions, which could make or break a head-to-head contest.

NRL Fantasy Team of the Season 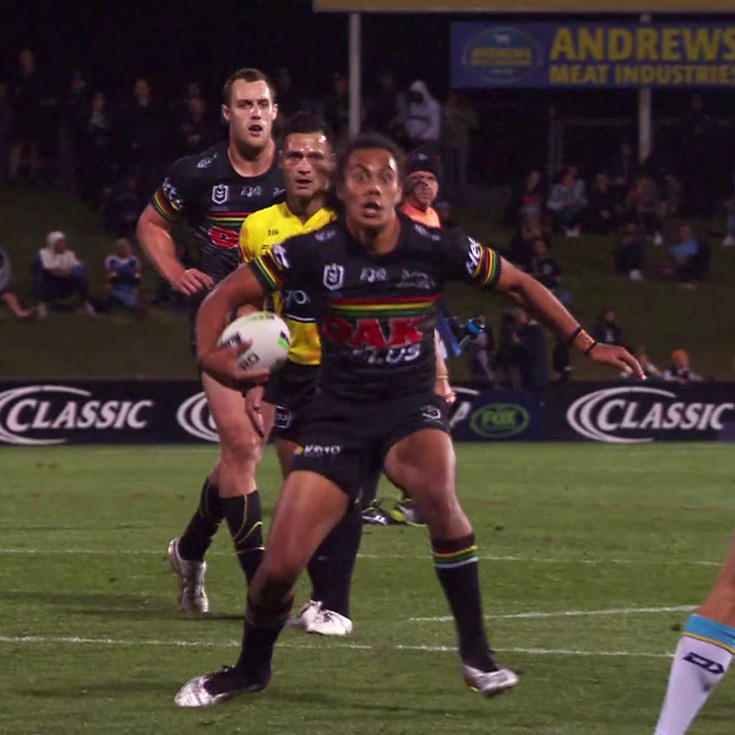 CNK's analysis of his bench and emergencies

CNK's analysis of his centre pairing

CNK's analysis of his forward selections