Paradise one week. Eye of the Storm the next.

Parramatta's season is over, crashing back to reality as the Melbourne Storm ran riot at a wet and miserable AAMI Park to seal a 32-0 victory on Saturday night.

Waiting for them, the Sydney Roosters. The reigning champions up against the minor premiers.

A preliminary final worthy of a grand final.

Cooper Cronk against his old club – potentially his last game in the NRL.

The Storm, bamboozled just a week earlier against the Raiders and left searching for answers, returned to their clinical ways at AAMI Park to seal a spot in their fifth consecutive preliminary final.

Five straight years the Storm have been alive in the penultimate week of the season, and they'll be hoping to make it four grand final appearances in those attempts when they travel to the Sydney Cricket Ground for the first time in the club's history next Saturday.

Parramatta came into the game with their confidence sky high after their historic 58-0 win against the Brisbane Broncos in the opening week of the finals, however life away from Bankwest Stadium hasn't been enjoyable for the Eels in 2019.

They had won just four games on the road this year, but of greater significance was the 64-10 scoreline against them the last time they met the Storm back in Magic Round in round nine.

The Foxx lights up AAMI Park

The Storm continued their dominance of the Eels, making it 96-10 against the Eels in 160 minutes of football against Brad Arthur's men in 2019.

Regardless of the events that unfolded in Melbourne on Saturday night, Parramatta can take great pride in their achievements having climbed from wooden spooners to a top five team in the space of 12 months.

For the Storm, the Cameron Munster-Jahrome Hughes halves combination has been far from fluent since Craig Bellamy decided to dump Brodie Croft, but Saturday night's win in front of a crowd of 21,015 was a huge step in the right direction for the Storm.

Bellamy also made another huge call before kick-off, relegating veteran Will Chambers to the bench and recalling Curtis Scott from Queensland Cup into the centres with great effect.

Despite the greasy conditions, the Storm weren't afraid to use the ball inside their own half – with Josh Addo-Carr bamboozling the Eels defence to run 80 metres for the opening try of the night in the early exchanges.

Scott, who was brought back into the team despite playing just one NRL game since round nine, then combined with Suliasi Vunivalu to push the Storm out to an 8-0 lead.

The Eels looked to have withstood a Storm onslaught, only for Maika Sivo to cough up the pill coming out of his own half and it turn allowed Cameron Munster to dive on a deflected Smith grubber for a 12-0 lead.

The boot of Smith, off target to start the game, kept the Eels within two converted tries despite the home side notching three tries in the opening quarter of the contest.

But the nightmare continued for Parramatta, with Suliasi Vunivalu batting a kick back to Jahrome Hughes to push Melbourne's lead out 18 points.

The Storm were in a mood and Parramatta had no answer for what was being thrown at them, this time Addo-Carr chasing down a Munster grubber for their fifth try of the night.

The reprieve the Eels were after came in the form of a sin bin to Smith, who latched out Reed Mahoney with a slap that slightly collected the hooker's head.

Despite the controversy around the Storm captain's sin-binning, the Storm didn't let it distract them from the task at hand – holding out a frantic Parramatta who were guilty of playing too sideways in the search of quick points.

The Eels began the second half the better of the two teams, however head knocks to Clint Gutherson, Tapai Moeroa and Marata Niukore halted the Eels momentum and left them with just one on the bench with 25 minutes remaining.

A well executed set play from the scrum saw Ryan Papenhuyzen take advantage of extra numbers down the narrow blind side, before big Nelson Asofa-Solomona put an exclamation mark on the result when he crashed over from close range in the dying minutes. 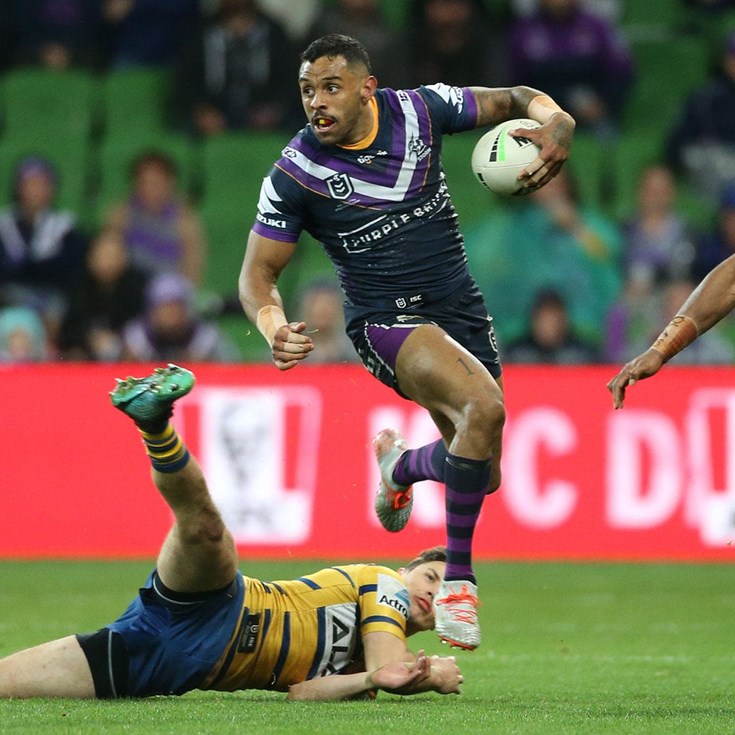