They have suffered consecutive defeats and now have lost captain Simaima Taufa with ankle ligament damage.

However, the Roosters are down but not out – yet.

Needing another miracle, similar to round three last season, to make the 2019 NRLW grand final, coach Rick Stone has shifted the forwards around to give more grunt up front.

NSW City forward Aliti Namoce has been promoted from the bench to prop, front-rower Rebecca Young and backrower Shontelle Stowers have been dropped to the reserves, while halves bench utility Zahara Temara has been shifted to lock.

Staring at an 0-2 start to 2019 with losses to the Warriors and then Broncos, the Roosters desperately want a win against the Dragons at Leichhardt Oval on Sunday.

It would need to be a huge victory like the 26-0 result against St George Illawarra in 2018, which put the Roosters into the grand final against the Broncos.

"I've got to admit straight after last weekend's game [20-0 to Broncos] we were really low," Maynard said.

"But after a couple of good nights' sleep at home and getting back into our routine, we've realised that we've got good quality players here and we have a great connection.

"Being away together has brought us closer as a group but our results haven't reflected that."

Both the Roosters opening two rounds this year were played at Melbourne's AAMI Park.

"It's been character-building as a team to be at this point that we have to try and dig ourselves out," Harden said.

"I believe losses tend to bring you closer as a team rather than rip you apart.

"We’re definitely still optimistic as there's still a slither of a chance that we could make the final. Obviously it's not the position we wanted to be in.

"But the fact there's still some hope is exciting.

"It's hard to pinpoint what's gone wrong but I think the general cohesiveness with what we do on the training field into games hasn't quite transferred across."

Maynard felt the individual skills set was huge, but was not rolling out smoothly enough as a team.

"I think it's a combination of execution and not playing together long enough. We all come from a variety of different clubs, with different backgrounds.

"So gelling in just two games has been harder than we expected."

Every NRLW try from Round 2

The Roosters spine has also been a moving feast over the three rounds. Melanie Howard and Kirra Dibb were the No.7 and No.6 in the 16-12 loss to the Warriors in round one, then Simone Smith and Temara were the halves in round two. For round three Stone has returned to the Howard-Dibb combination.

"Changes in our spine is a big factor in terms of momentum in having that leadership to steer us around the field," Maynard said.

In addition to that reshuffling, Maynard has her old international rival – Jillaroos No.9 Brittany Breayley – opposite her on Sunday.

"I really respect her as a player and a person. I love our battles and we've had some good ones," she said.

"We've got totally different styles. And with me at the moment I feel I'm tackling a lot more so that's taken a bit of my attacking prowess away. I'd like to get back to running the ball a little more from dummy-half."

Harden is averaging over 25 a game and leads her team in steely defence with a 98.4% tackle efficiency rate.

"That's one thing that has improved with all the girls this year," said Harden, sporting a black right eye. "The hits are harder, the collisions are bigger, but I'm loving it." 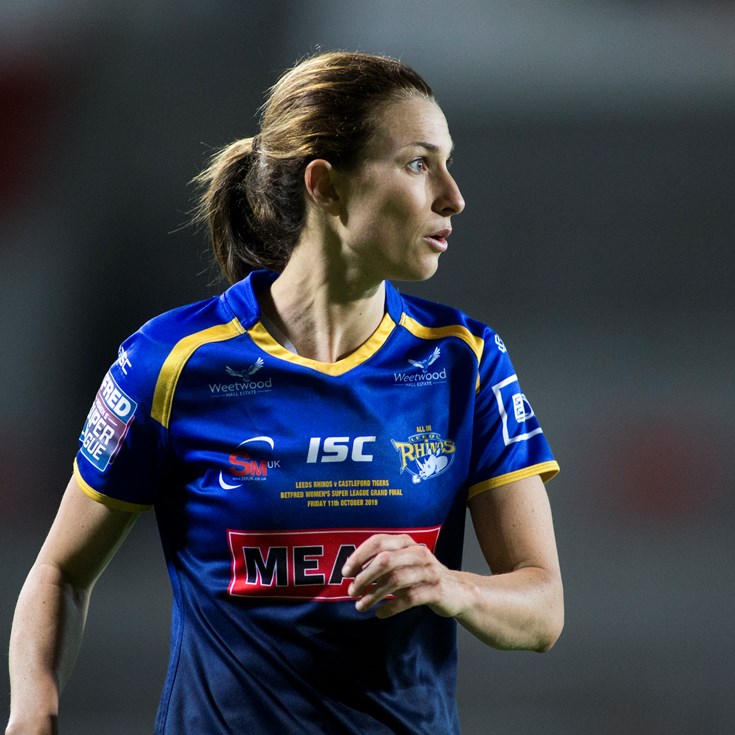 'The next crazy thing to do': Roosters sign Woman of Steel for Nines