The Roosters are one win away from becoming the first team to record back-to-back premierships since the 1993 Brisbane Broncos after edging out Melbourne 14-6 in their preliminary final at the SCG.

They will be favourites in the decider against Canberra, who will be playing their first grand final since the year after Brisbane won their successive titles.

The defending champs booked their ticket to the big dance with a superb 80 minutes of defence but the brutal 80 minutes could take a toll on their grand final team list next week.

Luke Keary faces a nervous wait from the match-review committee after his swinging arm put Felise Kaufusi out for the game while the five-eighth was also limping late in the game.

Mitch Aubusson failed an HIA while Latrell Mitchell was also troubled after having his leg twisted awkwardly in a tackle.

Those are next week's problems however, with Tricolours fans delirious at the end of an 80 minutes that featured some uncharacteristic mistakes from both sides – but a few moments of brilliance from the Roosters paired with top-class defence was enough to end the season of Craig Bellamy's men and keep the back-to-back dream alive.

Whether it was the unusual dimensions of the SCG or just an off night, the Storm kicking game was well off with Jahrome Hughes putting one out on the full and Cameron Smith conceding a seven-tackle set in a sloppy first half.

A brilliant spell off the bench from Brandon Smith threatened to turn the tide but an equally impressive interchange stint from Angus Crichton proved just as pivotal in a match that threatened to bubble over from the opening set.

The fire and brimstone started almost from the first whistle with Nelson Asofa-Solomona taking the first carry of the game and being hit by Siosiua Taukeiaho.

The Storm giant objected to the tackle and delivered a slap to the face of his rival prop who responded with a swinging arm of his own, bringing teammates rushing into the fracas.

Once it was settled down both players found themselves in the sin bin just 20 seconds into the contest.

The reduction to 12-on-12 didn't advantage either side but Asofa-Solomona was the one penalised for inciting the incident which handed the Roosters a free two-point head start.

The game continued at high intensity and while there were no further points during the sin-bin period, Roosters skipper Boyd Cordner bagged the opening four-pointer in the 15th minute.

A soaring Daniel Tupou outleapt a flat-footed Will Chambers from a Keary bomb to somehow pop an offload to an unmarked Cordner.

The Roosters' goal-line defence got a solid workout in the next period when Luke Keary fumbled the kick-off then Brandon Smith forced a pair of turnovers with a one-on-one steal then a big shot to force an error but each time the Bondi wall appeared totally untroubled by the Storm attack.

A fend to the face from Felise Kaufusi on Keary fired up the little five-eighth who first took out a chunk of the edge forward's hair before delivering a swinging arm that could well attract the attention of the match review committee given Kaufusi was sent for an HIA and subsequently failed.

A Cordner line break scattered the Storm defence and when Jahrome Hughes was found not square at marker Mitchell added another two to make it 8-0 at the break.

The Storm re-set well after the break, reverting more to a middle-third forward-power approach and the tide slowly started to turn with the Roosters forced onto the back foot.

It took a Hughes mid-field break to properly scatter the Roosters defence with man mountain Asofa-Solomona using his incredible height and reach to stretch out and plant the ball down from the ensuing play.

Smith sends Asofa-Solomona over close to the line

Hanging on to their momentum advantage the Storm sensed a killer blow coming but couldn't quite find it as the Roosters defence forced a few rushed errors.

Joseph Manu stole an attacking bomb from the clutches of Papenhuyzen to cross but the Bunker found a knock-on from Tedesco's thumb in the lead-up.

Melbourne's sigh of relief didn't last long as Crichton's second line break of the half powered the premiers downfield and Tedesco scooted over from the next play. It was a double blow for the Storm as a head clash between Kenny Bromwich and Papenhuyzen forced the fullback from the field.

Mitchell's clutch sideline conversion made it a daunting 14-6 lead with just over 10 to play and with Hughes forced to fullback, centre Curtis Scott to five-eighth with Sandor Earl off the bench to play wing they had to find something with a huge reshuffle.

However, despite a couple of close calls, including a try-saving tackle from Tedesco on Brandon Smith, the Roosters maintained their advantage to book a grand final appearance against the Raiders. 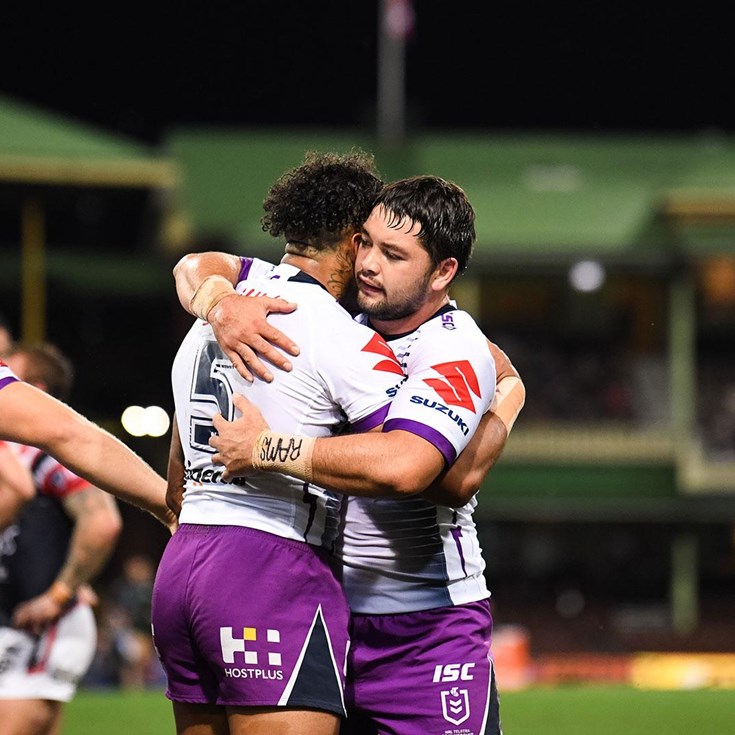 Robinson will not rush SBW in