Canberra's international winger Jordan Rapana is keen to make a temporary switch to rugby before returning to the Raiders.

The 30-year-old Kiwis flyer is off contract but doesn't want to make it a permanent split and is even more determined to be part of a Raiders premiership after the heartbreaking six-point grand final loss to the Roosters.

His thinking is a temporary solution, where he plays rugby for the opening few months of 2020 and then returns to the Raiders.

"There's a lot of unfinished business here. My plans are to come back here," he told NRL.com.

"I haven't spoken to my manager yet but I'll do that in the next week or so.

"I just can't leave now. I want to stay here and win a premiership with these boys – that's my goal, that's always been my goal in the six years I've been here."

He said even if the Raiders had beaten the Roosters he would be working towards the same plan. But he couldn't deny the loss hadn't stoked the fire considerably.

"Canberra is home for me – well it's my home away from home," said the Wellington-born Rapana, who smashed 61 tackle breaks in his 21 games this season.

"But whether I have to go away somewhere for four or five months just to make up financially the money that I need to get to make ends meet, then so be it.

"Whether that's Japan or England or wherever it is, those [rugby] seasons only go for four months, so I'll have enough time to come back here for the start of the NRL season [March].

"So I can tell you right now I'll be back playing for the Raiders at the start of next year. [The grand final loss] has definitely fuelled the fire inside me again to want to get that premiership.

"So I'll be getting into Sticky [coach Ricky Stuart] and Don's ears [CEO Don Furner] to make sure they keep me here."

Furner told NRL.com the club was open to trying to make Rapana's rugby plan work for both parties.

"Well that's a possibility. I know his agent is working on it but I haven't had any more updates since last time we talked," he said.

"That conversation still has to happen, because he's the only one off contract from our grand final team."

The Raiders have finalised their 24-man squad, as required by November 1. That leaves positions vacant before the final 30-player squad is completed before June 30.

Among the controversies hurting the Raiders chances in the grand final, Rapana's put-down in the north-east corner of ANZ Stadium in the 59th minute was disallowed due to a forward pass from centre Joey Leilua.

"I thought it was a tough call but I'm not allowed to say if it was forward or not. We still have plenty of time after that and plenty of other opportunities as well," he said.

"You've got to pounce on those opportunities. You only get three or four in a game. That's the difference between us and them – they really capitalised on theirs." 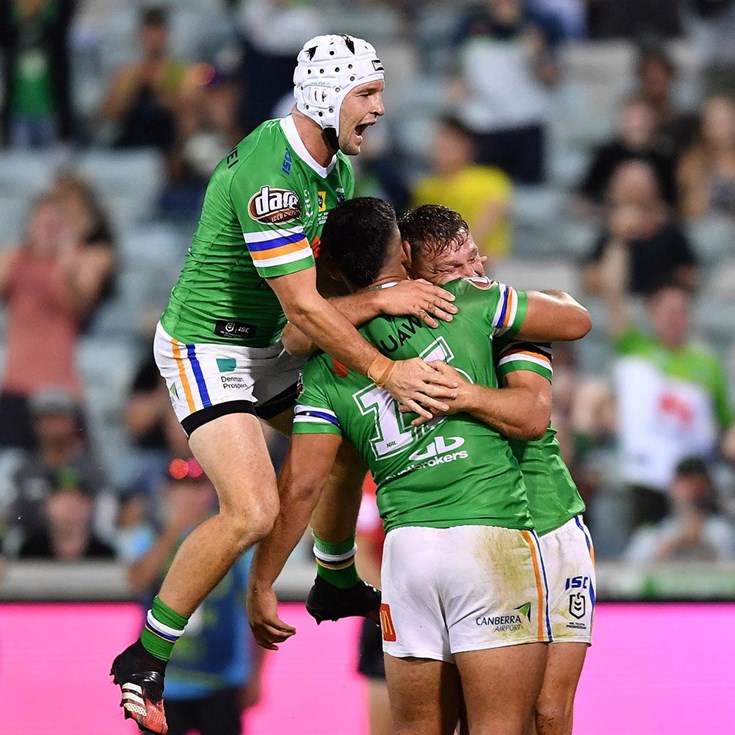