It wasn't without trepidation, but England international Amy Hardcastle is thrilled to be back where she was first part of the new era of the women's rugby league.

Hardcastle and her side are preparing for their busiest season yet, with the World Cup 9s to be followed by a historic tour of Papua New Guinea that will include Test matches against the Orchids on November 9 and 16.

With the Super League season ending last weekend with the Leeds Rhinos victorious over the Castleford Tigers, focus among England's top female players has switched to the international game.

But for Hardcastle, there was one other thing on her mind – a flight to Australia that she was dreading.

"Last time I came out here, I was a bit nervous on the flight," she said.

"It took me a week to get over the jetlag because I wore myself out physically and emotionally on the journey. I said I would never come back," Hardcastle said.

Fortunately, she has returned and her prize is a debut appearance in Nines football.

"I am very excited because this is my kind of game, lots of space and the intensity and the pace. I've trained super extra hard because I know it's going to be tough," Hardcastle said.

But for Hardcastle, a new format of the game is only part of her excitement.

How the inaugural Rugby League World Cup 9s will work

"I want to just go out there and enjoy it. Not many people get to say that they have had the opportunity to play against the best in the world, so to have the chance to come to Australia again and play rugby league is a huge honour."

Another benefit on a return trip to Australia is the chance for Hardcastle to experience a scene in which women’s rugby league has a high standing on the sporting landscape.

"Coming over here in 2017 and seeing how the Australian Jillaroos were treated by the sport, why wouldn't we - as a country - want to take that on board for our women. We all deserve it."

Joining Hardcastle are her 15 teammates which mainly come from the top four teams in this year’s Women's Super League - St Helens, Castleford, Leeds and Wigan.

Hardcastle is the only woman from her club, the Bradford Bulls, to be selected. She will serve as team vice-captain.

As a stalwart of the English team, Hardcastle is excited about the calibre of team that England has brought over for the Nines.

I am very excited because this is my kind of game, lots of space

"I think we have the best England squad we have ever had. I am the oldest in this group, but the young players are just improving all the time and just when you think they can’t give any more, they surprise you," she said.

There are only a couple of women in this English team that have played against the likes of the Australian Jillaroos and Kiwi Ferns.

The competition the team will get in coming weeks presents a great opportunity ahead of the 2021 World Cup. Hardcastle explains that in previous World Cups, France would be the only pre-tournament competition her team would get.

"By coming here and playing the best teams in the world, we better ourselves as players and it will help to improve our game," says Hardcastle.

Increased support has seen big changes in England. When the Women’s Super League commenced just two years ago it started with four teams. Next year, 10 teams will compete.

England fire up on the water ahead of 9s

For Hardcastle, this demonstrates growth in rugby league that she never thought she would see during her career.

"I've not known anything like it is at the moment.  Luckily, I am still young enough to be playing in it," says Hardcastle.

"When I was young, you would get one or two people coming to training and open women’s sessions.

"Now there are clubs popping up everywhere and women putting their hands up to play. The growth is great and it can only get better from here." 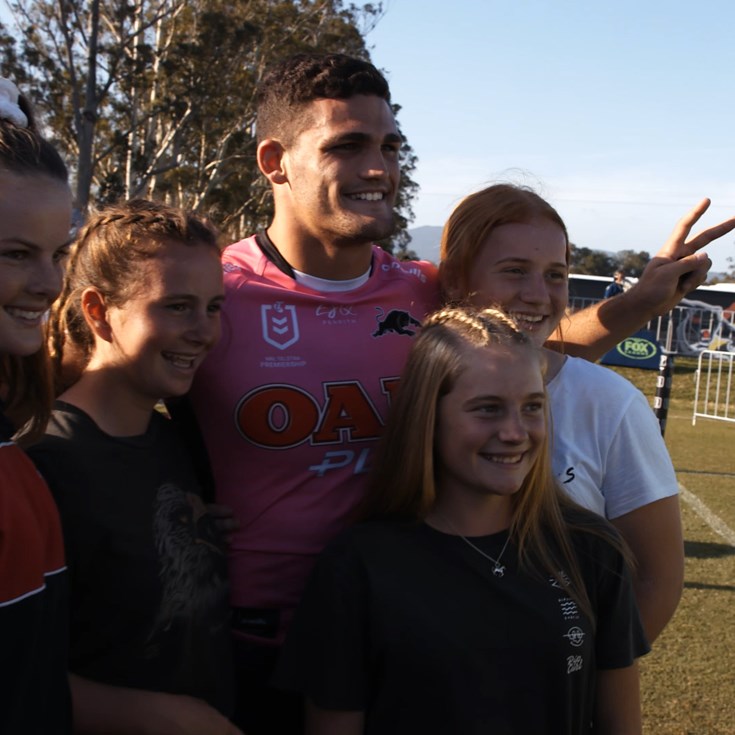 Cleary king of the kids after Bega trial

Brown still looking for ribs, but happy with his back

Morgan and Holmes combine for try against Storm