One of the best things about any World Cup, and it is certainly true of the upcoming World Cup 9s, is the chance to feast your eyes on new and upcoming rugby league talent.

While NRL fans are rightly salivating at the chance to see what the likes of Kalyn Ponga, Shaun Johnson, David Fifita and Jason Taumalolo can do against reduced defensive lines, a host of lesser-known players from the northern hemisphere and Pacific Islands also have the chance to shine.

Here are nine players to watch out for that the average NRL fan probably hasn't seen yet.

Still just 22, Wales speedster Regan Grace made his Test debut four years ago and is coming off a grand final win with St Helens, making 145 metres with four busts in a 23-6 win over Salford. He nabbed 20 tries – just three behind teammate and competition leader Tommy Makinson – this season. His dazzling footwork, blinding speed and acrobatic finishing are perfectly suited to Nines football.

Papua New Guinea winger Bernard Lewis is something of a known quantity when it comes to Nines football; he lit up the 2017 Auckland Nines in the Sydney Roosters' title win with a series of long-range breaks and tries. An ACL injury ruled him out of 2018 but the 2019 comeback has been impressive, with 10 tries in 18 games for the Bears in NSW Canterbury Cup.

With no senior representative appearances yet, 23-year-old Leeds flyer Ash Handley will be a relative unknown to any Australian league fans who don't keep a close eye on the Super League. His fourth full season has been easily his most profitable, nabbing 22 tries in 28 games – just one behind competition leader Tommy Makinson, despite Leeds struggling for wins. Tall, quick, hard to handle, Handley is capable of playing wing, centre or fullback.

Cook Islands winger Paul Ulberg has had a busy Intrust Super Cup season at Norths Devils, with 12 tries in 23 games and a massive 124 tackle busts (more than five per game). He topped 150 metres 10 times this year. Also scored a hat-trick in the Kukis' 66-6 demolition of South Africa in their mid-year World Cup qualifier. He looks perfectly suited to the Nines format.

Young Lebanon forward James Roumanos played 19 games in Canterbury Cup for the Bulldogs this year despite still being eligible for the club's under 20 side. He was promoted to the club's top 30 roster mid-season following the departure of Rhyse Martin and also made his Test debut in the mid-year loss to Fiji. He's not as flashy as most of the players in this list but his energy and work-rate in the middle will be crucial for the Cedars, especially given the experience that has moved on since the 2017 World Cup.

A try-scoring freak in France's top-level domestic competition for several years, Hakim Miloudi has gone on to represent Hull FC in the English Super League and Toronto Wolfpack in their successful push for promotion to the Super League this year. Criticised at times for being somewhat erratic, the talented centre, winger or fullback's adventurous style could find a home in the Nines format.

The young California-born playmaker spent most of his life in Melbourne, where his father John was on staff at the Storm for many years. Donehue came through the Storm system, though a serious injury ruined his debut season at the Sunshine Coast Falcons last year. He's since returned stateside for a contract with USARL side Brooklyn Kings and has played two Tests for the USA.

Unlike most of the players on this list, Albert is a middle forward rather than a speedy back. Generally in the highlight reels for putting on monster shots, Albert will be crucial on both sides of the ball as PNG look to upset the competition heavyweights. If she gets a chance to line up any of her opponents one-on-one, get ready for a collision.

The young Leeds fullback won a Super League grand final on her 18th birthday last weekend before jumping on a plane to Australia to contest the World Cup 9s. Tall, fast and skilful and capable of playing wing or at the back, Beevers is a rising star of England rugby league having already bagged a double on Test debut. 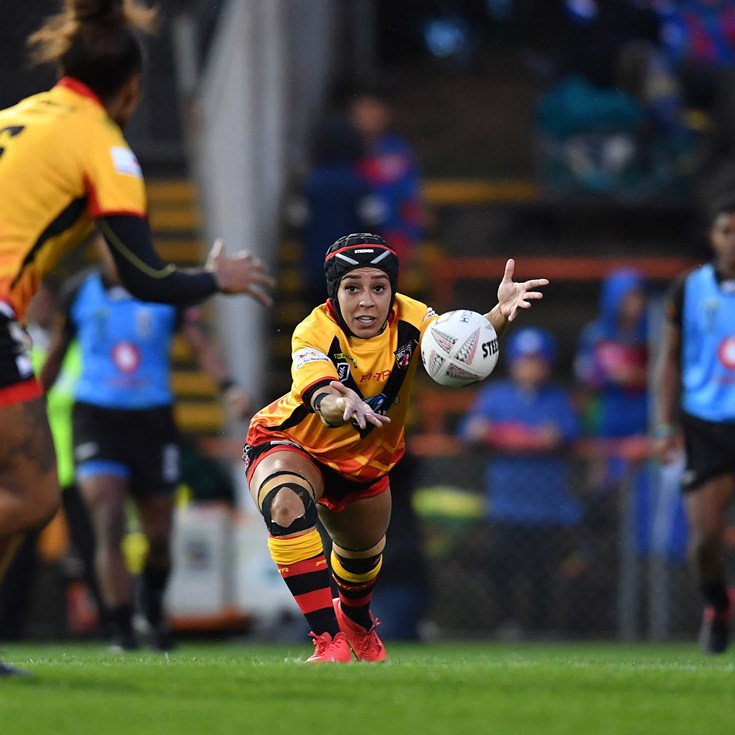 Burgess reacts to Lebanon boil over