Teen sensation David Fifita is set to let his mum decide his playing future but Junior Kangaroos coach Neil Henry is happy for the Broncos forward to call the shots in Friday night's international against France at WIN Stadium.

Fifita will captain a Junior Kangaroos team containing players up to four years his senior but there are few who would question the decision after a stunning season which has him on the verge of a senior Test debut.

The 19-year-old's performance for the Prime Minister's XIII in Fiji and his starring role for Australia in last weekend's World Cup 9s have convinced many in the game that he would be worth the $1 million per season price tag being bandied about for his services.

Fifita played down his value before taking part in an opposed training session against the Kangaroos at Kiama but most Australian players believe he would be worth the money and so do rival NRL clubs, who can begin negotiating with him from November 1.

However, to get his prized signature on a contract, club officials will need to gain the approval of Fifita's mother, Gwen.

"I just worry about my footy and whatever my mum wants I will do because she is the one who has always been there and seen everything," Fifita said. "She will make the call – and she will make the right one for me.

"She will be the one that probably would make my decision. She does everything for me and whatever she says goes."

Papalii in doubt for Test as Fifita takes centre stage

Fifita considered representing his Tonga heritage in the Tests against Great Britain and Australia but Gwen believed he would be better to play for the PM's XIII, World Cup 9s and Junior Kangaroos.

While he remains keen to play for Tonga, Fifita is likely to be a regular member of Kangaroos squads for years to come.

"At the end of the day I had a conversation with my mum and I would love to play for Tonga at some stage but I just wanted to do this," he said.

Broncos team-mate Payne Haas is another sounding board after signing a six-year $3 million contract with the club before he turned 18.

"I always talk to Payne, he is real close mates with me and he has been in that situation too," Fifita said. "He had every club in the NRL chasing him. He really knows what he is talking about and I just get feedback off him."

Asked about the possibility of leaving Brisbane, Fifita said he wouldn't be keen on living in Sydney – but the Dragons may be a chance to lure him away from the Broncos because of their location.

"Sydney is a nice place but that city area is not me," he said. "Wollongong is pretty nice, it's got relaxed, chilled vibes. In Kiama we are staying right near the beach and I like that lifestyle. I couldn't live in Sydney. It is too busy."

He will lead the Junior Kangaroos at WIN Stadium on Friday against a France outfit which is largely unknown to the Australian coaching staff, headed by Henry.

"Neil Henry broke it to me, he just told me you are captain and I was pretty shocked," Fifita said. "I thought there were a few boys in front of me but I grabbed it with two hands. I am pretty grateful.

"He said that Crofty will be the vice-captain as well.  He does all the talking. That is what Neil also said, he said you just lead with your actions and play your game and Crofty will direct the team."

Fifita captained Keebra Park High to the national schoolboys title in 2017, and won the Peter Sterling Medal as player of the final.

Croft, 22, said he was happy for Fifita to take the reins and he will direct the team from the playmaking role.

"He is an incredible athlete, I love watching him play and I love the fact that is on our team this week and I am not versing him. The more ball we can get to him the better our team will go," Croft said.

"They say actions speak louder than words so I will certainly be letting his actions do the talking and that is hopefully where I chip in.

"I like to pride myself on communication out there so I will do my best to call the shots and run the boys around the park and let him lead the boys with his damaging runs." 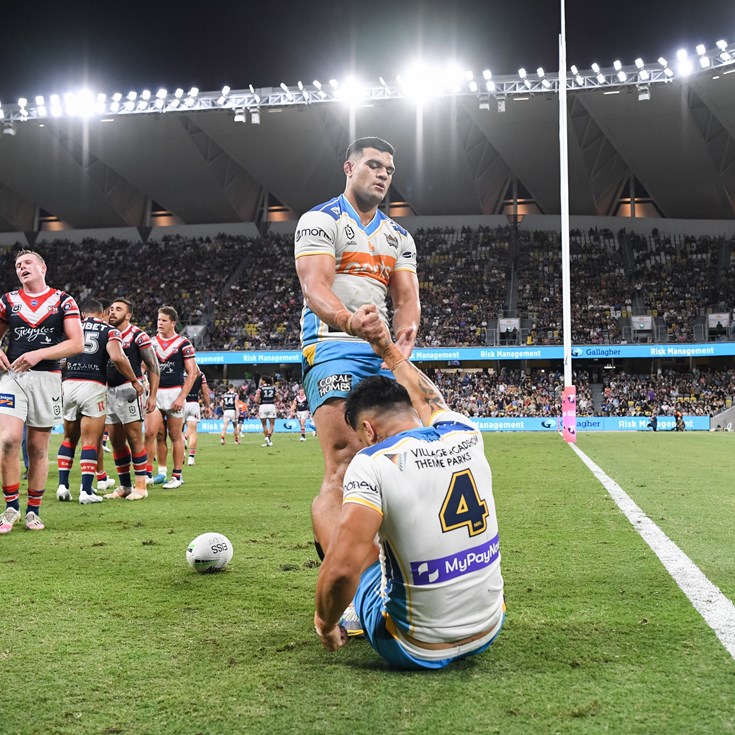 Ponga and Croft winding the clock back for Australia 'A'