A dominant New Zealand performance in the second and final Test against Great Britain on Saturday night saw the Kiwis win 23-8 and secure their first series victory over the Lions in 21 years.

Having run out of specialist outside back, coach Wayne Bennett named Austin on the wing following the late withdrawal of Zak Hardaker with a shoulder injury on Friday.

Another standout for the home side was Jamayne Isaako who scored 11 points via four penalties, a conversion and a late field goal.

The Brisbane winger was playing his first Test in his hometown of Christchurch with his terminally ill father Taai watching on from the crowd.

The Kiwis led 16-2 at half-time thanks to tries from Joseph Manu and Shaun Johnson, along with eight points off the boot of Isaako.

Earlier New Zealand got the scoring started thanks to a penalty in front of the posts, which came after Austin dropped a Johnson bomb and gifted them back-to-back sets with the ball.

But three minutes later Jared Waerea-Hargreaves was ruled to have taken too long to leave a tackle and Gareth Widdop locked things up with a penalty of his own.

Despite bringing in another towering bomb sent his way, Austin was promptly bundled into touch and on the next set centre Joseph Manu made the Lions pay, bouncing out of a three-man tackle to slam the ball down.

Manu slams it down

Isaako then landed two penalty goals in the space of four minutes to stretch the Kiwis' lead to 10-2 on the half hour.

Cleary out to prove a point after being dropped from the national team for the first time in his career last week, Johnson earned a repeat set with a pinpoint long kick into the in-goal area and then produced a brilliant individual run to score New Zealand's second.

After standing up Elliott Whitehead with some dazzling footwork the Sharks playmaker weaved his way over, with Isaako converting for a 16-2 lead at the break.

More points following in the second spell for the Kiwis, and after getting his side into attacking position with a powerful run where he broke five tackles, Ken Maumalo scored his fifth Test try with an athletic finish in the corner.

Trailing 20-2 with half an hour to play Great Britain needed something to spark them to life, and got it in the way of a late Josh Jones offload which resulted in a try to Josh Hodgson.

Widdop converted to reduce the deficit to 12, but hopes of building momentum were thwarted when Alex Walmsley dropped the ball 10 metres off the Lions' line on the very next set.

First John Bateman was found to have missed the ball on a desperate effort to ground it before the dead ball line, before Jake Connor was ruled to have knocked on in the lead up to a would-be try nine minutes from time.

With any hope of a comeback now lost, Great Britain were dealt one final blow when Isaako slotted a field goal and another penalty to stretch the final deficit.

The Lions have little time to lick their wounds, with a clash against Papua New Guinea in Port Moresby awaiting them next Saturday. 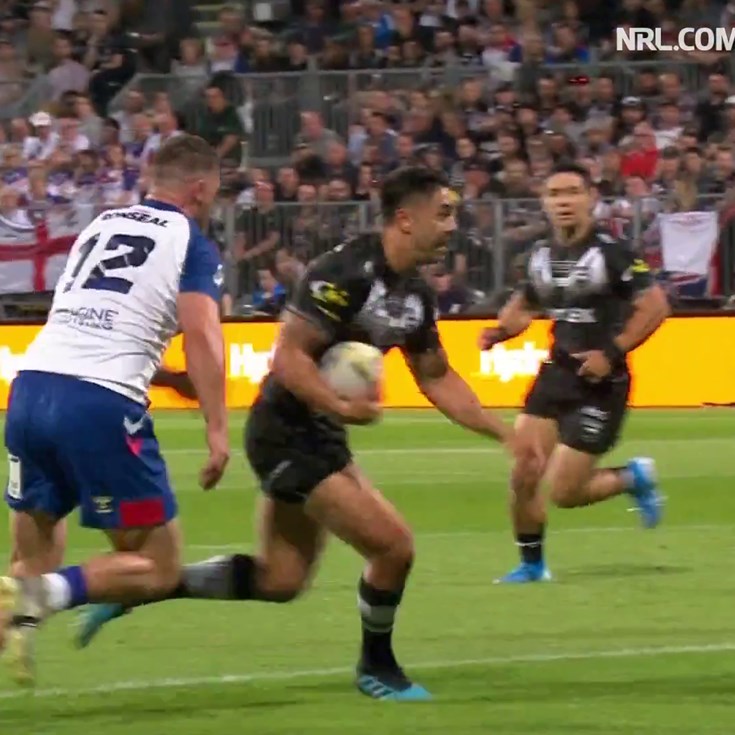 Johnson slices through the Lions