Life has changed dramatically in the past 12 months for Dylan Brown, or as his teammates now jokingly call him, the $2 million man.

“I came into training and they’re asking me for houses and cars,” the teenager jokes in his first interview since signing a three-year extension on Tuesday.

Don’t mistake the cheeky halfback nature for arrogance, because this humble teenager that the Eels have now heavily invested in comes across as impressive off the field as he is on it.

After recent reports linking him to rival clubs, Brown reached out to his manager hoping to put it all to bed.

And on the eve of what was meant to be a range of interviews with rival clubs, Brown did just that - committing himself to the club that gave him his NRL debut last year.

"I just wanted to know what was out there and what potentially could have happened, but when I found out Parra were comfortable with signing me I was pretty happy to sign with them for the remaining years," Brown told NRL.com.

Brown reveals why he stayed at the Eels

"Parramatta’s been there since I was 15. My family and everyone knows me being in the blue and gold. Keeping it like that was much easier for me."

Among the changes in his life since launching his career with an eye-opening debut against Penrith in March, is the way he manages his workload after a back injury derailed his rookie season.

Having spoken to plenty of clubs to gauge their interest in Brown over recent weeks, the common concern was his ability to overcome his back issues.

The reality is, it’s something he will have to manage for the rest of his career, but Brown is confident it won’t force a premature end to it.

“You can’t jump around and do silly things anymore. Gym is a bit different. You can’t go in there and throw weights around, you have to work on your core and do a lot of specifics before and after training.

“I wanted to go skydiving again but I thought to myself ‘I don’t know if that’s the best thing for me’. I feel it’s for my own good [to think that way]. I know myself I’m not going to be stupid enough to throw away something I’ve worked so hard for.

“My diet has changed. I was quite a frequent takeaway guy. Living in Sydney it’s so easy, they’re on every single road man. This year I have changed quite a bit. But I’m not a vegan or anything.”

Brown has never seen Andrew Johns play. Growing up in New Zealand, he’d heard of Greg Inglis and Cameron Smith, but his rugby league knowledge didn’t extend much beyond that.

Now, after joining the Eels coaching staff, the eighth rugby league Immortal shapes as a pivotal figure in the development of one of the game’s brightest stars.

“I walked up to him and shook his hand,” Brown said of meeting Johns on Tuesday.

“I didn’t say much. I was pretty nervous. Straight away, as soon as awe started doing drills, I learnt so much.”

Brown grew up playing rugby union, and while he didn’t give thought to switching codes in recent contract discussions, he left the door open for a future stint at union.

“I’m enjoying rugby league at the moment,” he said.

“I’ve had a taste of the NRL and once you make it you get this hunger in you and you want to get better. But you never know in the long run, rugby could be a thing.

Brown’s family made plenty of sacrifices moving from New Zealand to Australia to allow him to pursue a career in rugby league.

But he insists he has never felt the pressure of having to justify the commitment his family has made, or giving into temptation to potentially return home and link with the Warriors.

“The thing with my family that has made it so much easier for me, is that really don’t mind if I make it or not,” he said.

“They just wanted to be with me. My brother came back from England. My sister is still in New Zealand. We’re all there for each other, whether we make it or don’t make it. They’re here for you no matter.

“I have nothing against New Zealand, it’s my home country. But there are a lot of opportunities over here. I feel this is is where I think I can grow and learn so much more - especially now with Joey at our club.”

One man Brown wanted to thank was coach Brad Arthur, who is arguably the five-eighth’s biggest supporter.

"Brad’s someone I’ve always been close with,” he said.

“Coming into the NRL as such a young kid, I needed to have a good relationship with the coach or it wouldn’t have worked in the first place.

“Throughout the year, with my back injury, we grew closer. He’s had my back, always. I’m pretty sure he’s quite glad I’m here and I’m glad I am too.” 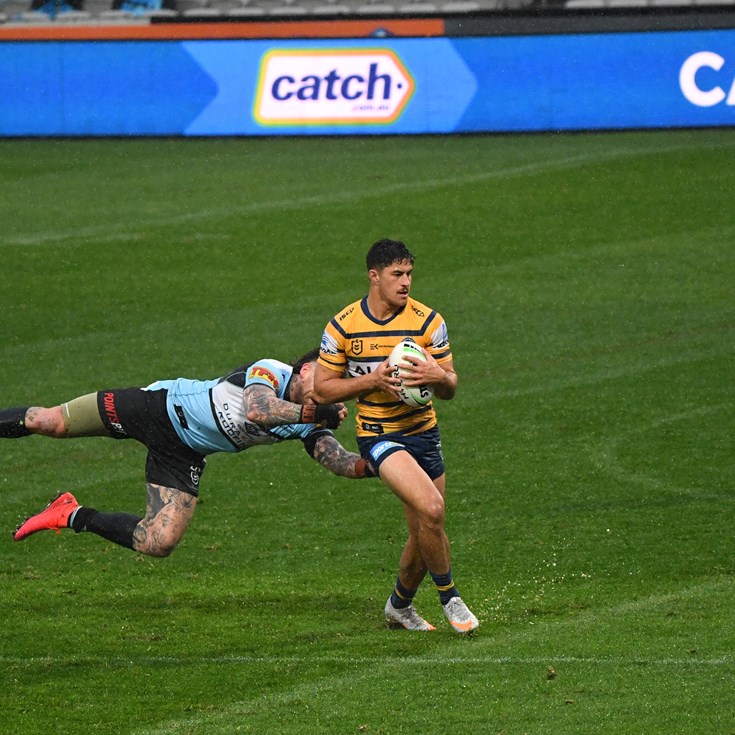 Right as rain: Brown at home in muddy conditions

Gutho honoured to lead teammates out for special milestone

Arthur re-signs with Eels until 2022

'Like a morgue': Eels disappointed after almost blowing huge lead