Corban McGregor concedes she'll be on her "L plates" when she performs the haka for the New Zealand Māori Ferns on February 22 but jumped at the chance to represent her Māori heritage.

McGregor is one of eight fresh faces in the Māori squad which has been boosted with a healthy NRLW contingent for the 2020 fixture.

The Jillaroos star was born in New Zealand to parents Mike and Gina, who are both of Māori descent, before moving to Australia at the age of three.

"A couple of years ago the fixture was announced for 2019 soon after I injured my shoulder so I was a bit sad because I would've been keen to play," McGregor told NRL.com.

"So I jumped at this opportunity this time around. I don't know much about my Māori culture yet but I'm eager to learn.

"I've always wanted to know more with Mum being full Māori. When she was in school it wasn't really taught so she hasn't been able to pass it onto me.

"I do consider Australia home and this is what I know. But it is nice to recognise and represent my Māori side as well."

McGregor sprints away to get lead back for Jillaroos

McGregor joined her new teammates at a camp in New Zealand recently and stayed at a marae – a traditional meeting house designed with carved buildings and used for meetings, celebrations, funerals and other tribal events.

"It was cool to go over and learn that side and has inspired me to learn more about my heritage," McGregor said.

"Being in Jillaroos camp is obviously totally different but I really enjoyed it. We had to do an introduction and had to research or ask our relatives about our history so I reached out to my Aunty who helped out there too."

McGregor said the opportunity to rub shoulders with players she'd usually line up opposite presented a chance to build her game.

"I've played a lot of footy with Kiana but it's great to be able to get the chance to play with girls like Raecene McGregor, Amber Kani, Sarina Clark and Krystal Rota," she said.

"You're always playing against them in Kiwi Ferns and at the Warriors so it's nice to be able to play alongside them for once."

As for standing next to them to perform the haka?

"We've had a few practices in camp and I was a bit shocked at how tough it was but it was cool," she laughed.

"I've got a few more weeks to keep practicing in front of the mirror and there are a few other girls slow at it as well so it doesn't make me feel as bad." 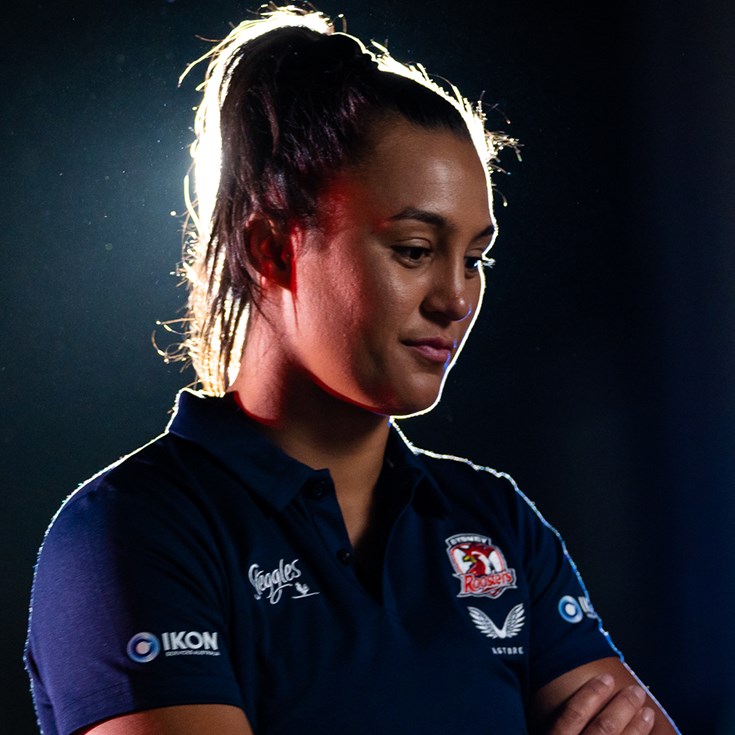 Roosters celebrate Corban Baxter for Women in League Round

Ruthless Maori women refuse to give Indigenous rivals a sniff

Power sees lasting impact of All Stars in Townsville