Anthony Seibold has made the stunning revelation that prop Matt Lodge has been playing with a partially torn ACL since 2015.

It is why the 24-year-old enforcer is confident he can return to the playing arena in 2020 after aggravating the injury on Tuesday at training.

Lodge will miss the early rounds of the Telstra Premiership but after consulting orthopaedic surgeon Dr Timothy McMeniman, he is ready to rehab his way back to full fitness.

His absence has opened the door for Pat Carrigan to make a claim for the starting lock position, where he will line up in the trial against the Cowboys in Cairns on Saturday night. Tevita Pangai jnr will play prop and likely stay there until Lodge returns.

Before training on Tuesday the Broncos coach addressed what has been a difficult week after outside back Izaia Perese was stood down from all club duties on Monday after being charged with drug offences. The next day Lodge suffered his injury, but Seibold said there was a silver lining.

"Lodgey has played with a partial tear in his ACL since 2015. He has had to do it before so that is what gives him great confidence and gives our medical staff great confidence that he can rehab this," Seibold said.

"It is disappointing that we lose him for the early rounds but he will do everything he can to get back as soon as he can."

"All he has done with it I understand is re-aggravated that injury in some way.

"In any case his welfare is what is most important. He wouldn't be going down this route if the specialist Tim McMeniman didn't recommend this so we have followed that advice."

Seibold said the club had the depth to cope with Lodge's absence.

"Tevita will play in the front row this week. He has played a whole heap of front row in the past and I think having Patty Carrigan, Tom Flegler and Rhys Kennedy we are well covered in that space, and Payne Haas," he said.

"Pat [Carrigan] has had a tremendous pre-season. Anyone  who has seen him physically can see he has grown and he was really good in the Capras trial so he gets an opportunity to start there. I think he will be thereabouts to start in the 13 jersey [in round one]."

The Broncos went out for dinner as a group on Tuesday night and Seibold said the players were upbeat despite the dramas of this week. He also stood by the way the Broncos had handled Perese's case.

"I am really proud of the way we have dealt with the Izzy Perese situation,” Seibold said.

"We have stood him down. We have provided welfare for Izzy and his family. He needs to focus on his court case and we have been really strong about that.

"The news around Lodgey has been positive so there is a spring in the guys' step."

The Broncos have had several other off-field incidents to deal with in the past 12 months involving David Fifita, Joe Ofahengaue and former Broncos James Segeyaro.

"I know there is a good group of guys there. Everyone has made mistakes at some stage including myself. You learn from them and move on.

"One thing I have noticed with the group is that there have been a few challenges thrown their way over the last couple of months but they have handled it well.

"I'm sure that will be other hurdles and challenges presented and we will deal with them the best we can. We are not perfect and we don't expect people to be perfect." 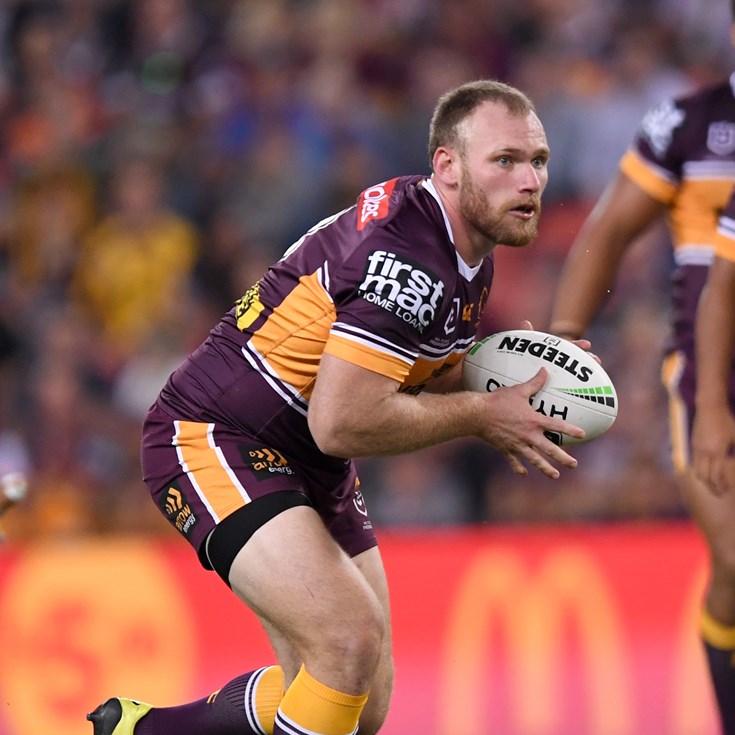 Carrigan feels fortunate to play on