A week-long celebration of proud cultures will come to a head on Saturday when the men's and women's All Stars matches take place on the Gold Coast.

The Indigenous and Maori teams both contain a great selection of top-flight players from both the NRL and NRLW.

The experts at NRL.com have taken a glance at the teams and provided their predictions for the action at Cbus Super Stadium.

I am tipping an Indigenous All Stars double. Latrell Mitchell appears pumped for a huge game and I expect him to thrive and inspire his side to victory. The women's game should be a cracker and I am a huge fan of inspirational leader Tallisha Harden.

The Indigenous men and women will take out both games. Having the game move back to where it all started and the excitement around that and the week that you have when you are playing and pulling on that Indigenous jersey will be enough emotionally to get these teams across the line.

It'll be a Maori All Stars double. The Indigenous men's side has lost a few through injury but still have a handy backline. Their forward pack, however, is far less experienced and the Maori side will want to make amends for last year. It looks like it will be a similar result in the women's clash. Both sides boast great talent with quality representative experience.

Brothers debate who is the real boss

The look in Issac Luke's eyes as he and the women performed a Haka at Tuesday's "Welcome Ceremony" shows the New Zealanders mean business as they seek to overturn last year's result. I'm backing them to do just that. The Indigenous team have lost some key forwards through injury. In the women's match, the Maori team - led by Kiana Takairangi, Raecene McGregor and Krystal Rota - look like they can get the job done.

I'll take the Indigenous All Stars to win both matches. Latrell Mitchell is in for a big 2020, and what better way to start than to lead his team to victory on the Gold Coast. In the women's match, Nakia Davis-Welsh is coming back after having a baby, just like Sam Bremner in the Nines. They will want to make up for last year's result.

They are two tough matches to pick. The Maori Men's All Stars look to have the edge in the forwards and the Indigenous men in the backs so it may come down to what style of game we get. I'll tip the Indigenous men in a tight one. The women's fixture is equally tough to call but I'm leaning towards the Maori side due to the recent form of some of their key players in the NRL Nines and World Cup Nines.

For mine, the Maori teams will win both matches. The Maori men learned last year what the All Stars concept is all about and will play an enterprising brand of football that suits their big mobile forward pack and exciting backs. With Corban McGregor joining fellow Kiwi Fern Raecene McGregor and Dragons NRLW pair Botille Vette-Welsh and Maddison Weatherall, the visitors look set for victory.

The Maori sides should win both matches - but only just. In the men's contest, both teams are fielding imposing line-ups but the Maori seem to have the edge in playmaking class. Kalyn Ponga could prove the difference. The Maori women boast plenty of international experience and the likes of Corban McGregor and Botille Vette-Welsh should be at the forefront of another narrow win.

There is incredible talent in both teams, but for me the Maori All Stars win the women's game. The team is full of experience including the likes of Raecene McGregor and Corban McGregor. The men's game will also be full of passion and I'm backing the Indigenous team to win. I'm expecting their speed and attacking prowess to be too much for the Maori team.

It's so hard to split these teams but I think the Indigenous All Stars might scrape through with the win in the men's game considering so many of their players have points to prove - plus their speed on the flanks with Blake Ferguson and Josh Addo-Carr is second-to-none. In the women's game, I'm also leaning towards the Indigenous squad.

Laurie Daley's Indigenous All Stars will repeat last year's success with Josh Addo-Carr and Blake Ferguson running riot out wide and Josh Kerr further enhancing his reputation upfront. In the women's clash, the Maori All Stars can get home on the back of Nines standouts Raecene McGregor and Bo Vette-Welsh.

Ponga reacts to match-up against Mitchell

I'm going to tip the Maori sides in both contests. The men's team has the edge in the forwards with the size of Nelson Asofa-Solomona, Jesse Bromwich, James Tamou and Adam Blair and the intensity of Brandon Smith. Ditto the women's team which has real talent with Jillaroos duo Corban McGregor and Botille Vette-Welsh and crafty Kiwi Ferns hooker Krystal Rota.

The Indigenous men's side simply has too much speed and flair and they'll streak away with it late. Yes, they’re a little short on big boppers, but their mobility could be a huge asset against an imposing Maori pack. I think the Indigenous women will grind out a win as well.

In the men's game, I'll take the Indigenous side. Coach Laurie Daley has named a potent attacking side - which includes three players who were in the NRL's top 10 try-scorers last year. I'm picking it'll be a different story in the women's game though, with the experience of players like Krystal Rota and Raecene McGregor to get the Maori side over the line.

The absence of Andrew Fifita and Ryan James is a huge blow to the Indigenous All Stars and has really gifted the Maori team a forward advantage with a pack led by the Bromwich brothers, Adam Blair and Kevin Proctor. If the Maoris win that battle up front, it will open the door for Kalyn Ponga. The Maori women led by internationals Botille Vette-Welsh, Raecene McGregor and Krystal Rota should again be too strong for the Indigenous team.

In the men's game, I like the look of the Indigenous side slightly more, especially in their backline. All eyes will be on Latrell Mitchell, but watch out for Jack Wighton. In the women's game, the continuity of the Maori side will play a role early in the clash along with their work through the middle third, which was so damaging in last year's contest.

There's no reason to suggest the Indigenous team can't replicate their crushing victory over the Maori side in Melbourne last year, but expect the margin to be much smaller. Expect another tight battle in the women's game, with the Indigenous team gaining revenge for last year.

Former Indigenous stars create connections for the next generation

The Indigenous All Stars should be too strong in both the men's and women's clashes. James Roberts looks ready to unleash his best on his return to Cbus Super Stadium, a happy hunting ground for him in the past. A player I expect to inspire the Indigenous women is powerhouse centre Steph Mooka.

They might not be at full-strength, but the Maori All Stars have the firepower to win the men's match. The match-up between Kalyn Ponga and Latrell Mitchell in the No. 1 jerseys will be worth the price of admission alone. All the pressure will be on the Maori Women's All Stars after they won a tight clash in 2019 and I expect that to work in the home side's favour. Stephanie Mooka could be the game-breaker.

In the men's game, I'll take the Indigenous team. When you're backline boasts Latrell Mitchell, Blake Ferguson, James Roberts, and Josh Ado-Carr it doesn't matter how many Kalyn Ponga's the opposition has, you're going to win. In the women's game, it looks like another victory for the Maori. They boast a formidable team peppered with internationals. 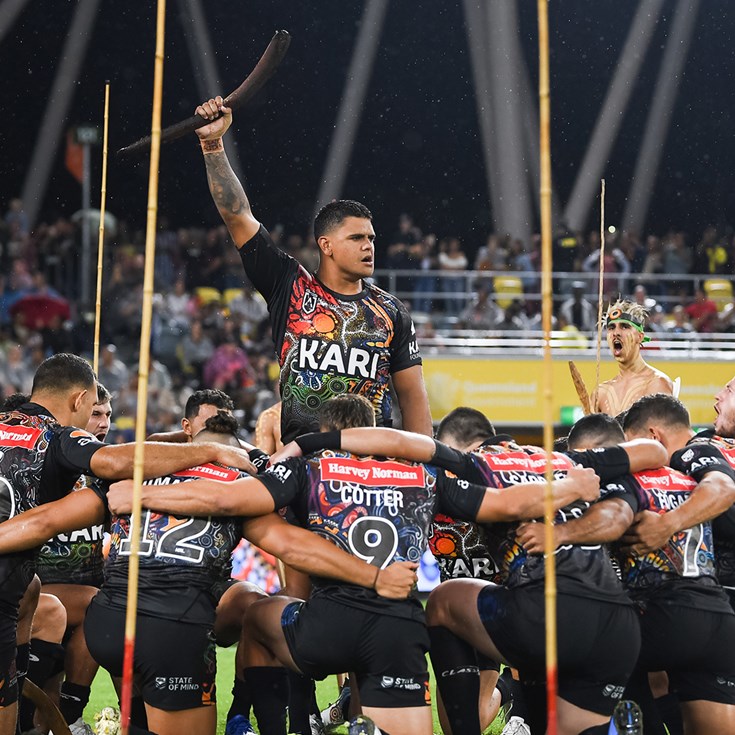 Inside the Indigenous All Stars' war cry

Preston Campbell: Pride can take All Stars to next level